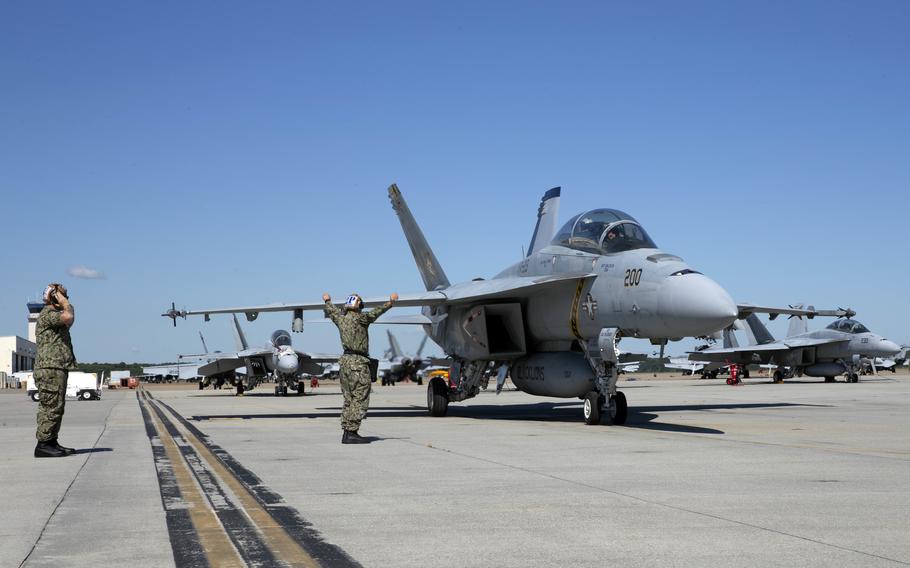 Rear Adm. Gregory Huffman, commander, carrier strike group (CSG) 12, taxis an FA-18E Super Hornet on the runway of Naval Air Station Oceana during an airborne change of command ceremony for Carrier Air Wing (CVW) 8, Sept. 30, 2021. Huffman was the senior officer in attendance at the ceremony where Capt. Joshua A. Sager was relieved by Capt. Dary E. Trent as Commander, CVW-8, during a ceremony attended by family, friends and staff. (Jeff Troutman/U.S. Navy)

(Tribune News Service) — The radio call boomed out over Naval Air Station Oceana as the two F/A-18 Super Hornets and the E-2D Hawkeye roared by:

“DT, you have the lead, on the right,” from the F/A-18 at the front of the triangle of planes. as Capt. Joshua Sager pulled his plane up.

And with that, the kid who enlisted in Navy fresh out of Monacan High School in the Richmond suburbs, more interested in cars than college, took command of the air wing attached to the Navy’s newest carrier, USS Gerald R Ford.

“I’ve heard a lot of people say, there’s no possibility for me ... I want to say, there is no ceiling, the only thing that holds you back is you,” Trent said.

But he’s also been told he could find the place he dreamed of as a young sailor minding the radar and identification-friend-or-foe systems in the combat information center of the destroyer USS Arleigh Burke — a place on an E-2D as it leads Navy fighters into harm’s away above the skies of Iraq three decades ago.

“I was an OS (operations specialist) on air intercept. We were the gatekeepers, we did the ‘red crown’ check as they took off, before the E2 took over, and we picked them up and IDed them, friendly or not, when they came back,” he said. “And I wanted to fly with them when they were over Iraq.”

Back in Norfolk, his new wife, a Navy nurse, had told him he should try a college course — taking a literature class would be a different experience for a sailor three years into his first hitch than it would be for the gearhead high schooler who enlisted in the Navy.

On Arleigh Burke, his department head saw something in the young sailor, already scrambling for his surface warfare specialist qualification that looked a lot like commissioned officer material.

“A leader is looking out for everybody, and I promise you, if you look out for them, they’ll look out for you,” as Trent told the sailors of Carrier Air Wing 8 after that flying change of command ceremony.

He kept taking classes over the half-dozen years after that first literature class, eventually earning an associate’s degree. He pushed for additional Navy certifications for specific shipboard functions, too. And in addition to pushing ahead of schedule for promotion to Petty Officer 1st Class, he put in for the handful of slots that opened up every year for enlisted sailors hoping to earn a commission.

After two rejections, he won a chance to go to the grueling Officer Candidate School in Rhode Island. He made it through. Then, 29, he won a place at flight school.

“I dreamed of flying off a carrier back in high school, but figured I couldn’t if I didn’t go to college, and I am now just putting on a flight suit at 29 and I am thrilled,” he said.

Qualified as a Naval Flight Officer, he won promotions to serve as commanding officer of VAW-125, a Norfolk-based E-2D squadron and battle director at the 609th Combined Air and Space Operations Center in Qatar.

Now, as commanding officer of Carrier Air Wing 8, he leads the pilots and sailors who fly off the the Ford, and who have been busy perfecting operations with nearly two dozen new systems on the first of its class carrier, setting standards that will shape Navy air operations for decades to come.

“You know, their average age is 20, 21. We’re asking them to taxi planes that cost $80 million each — an E-2D costs $200 million and they’re in there taking things apart and fixing them,” he said. “When you’ve got a plane captain, an enlisted sailor who’s maybe 20, 21, telling a pilot that his plane is checked out and ready to fly, there’s a lot of trust involved.”

Trent said demands on enlisted sailors have grown over the 33 year’s he’s been in the Navy. But he also knows some things haven’t changed.

“And I tell sailors: we don’t do anything alone in the military.”