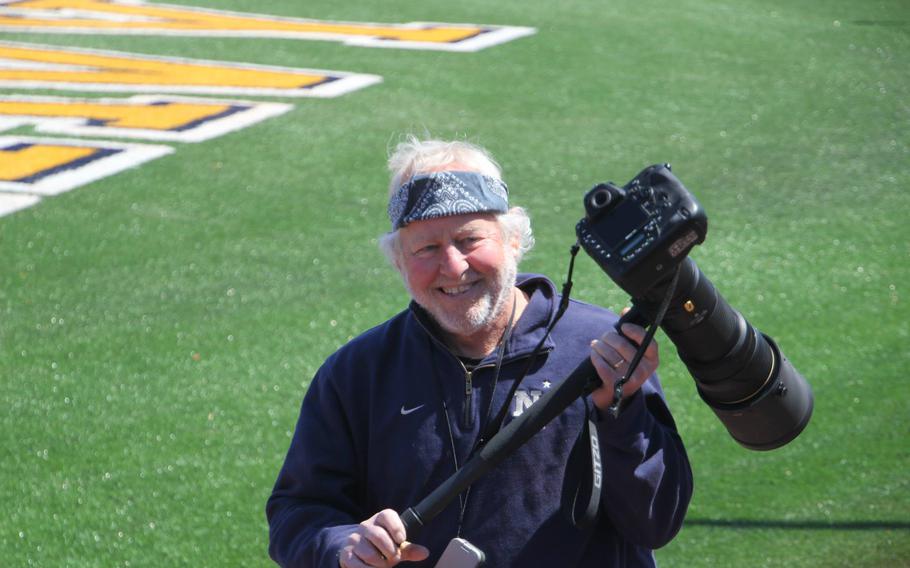 (Tribune News Service) — When Phil Hoffmann wanted to quit his rising Navy career to become a photographer, his superior officer sent him for psychiatric evaluation.

"They thought I was crazy," he said.

After maneuvering his way into becoming the Naval Academy's first full-time sports photographer four decades ago, Hoffmann has shot 40 Army-Navy games as of Saturday's clash. Though photographing so many of the service academies' annual duels could become blurry to him, he feels every one vividly.

Because to the 70-year-old Hoffmann, who also shoots for the Baltimore Ravens, it's not just the thrill of taking part in one of the most hyped college football games of the year. It's a moment like many moments — a comeback win for Navy lacrosse, soccer, rowing or baseball — that drive him to carry on.

Capturing generations of Navy athletes still feels like a righteous purpose to Hoffmann. It's their last moments free of danger.

"I don't care if you're a pilot, a marine, or go on a sea out to ship," he said. "These are dangerous professions. ... And these kids sign up for this when it's not popular to do it. And yet, they do it."

With wild white hair and trademark bandana, Hoffmann resembles a rockstar when he stalks the sidelines, at least in the sense that Midshipmen current and past scream his name when he passes them. He's watched legions of players come and go.

"I can't tell you the amount of satisfaction I get being involved in the athletic part of their Naval Academy careers," Hoffmann said. "Taking photographs of them in action, team photographs — things that I know will be lasting memories for them.

"Because we don't know for them when this life might end, and it could be prematurely."

As much as each athlete means something to Hoffmann, many of their names vanish from significance after their four years are up at the Academy. Then, unfortunately, sometimes their names reappear.

Commander Brian Bourgeois, a former Navy football player, died last week from a training accident. Hoffmann was flooded with inquiries for photos he may have taken of Bourgeois in a Navy football uniform.

But Bourgeois is far from the first during Hoffmann's time. He thinks of Ron Winchester, a former Navy football player killed in 2004 when an IED detonated in Iraq. Lieutenant commander Erik Kristensen, killed during a SEAL mission in Afghanistan in 2005. Hoffmann remembers Caleb King, too, a former Navy linebacker and Naval aviator killed in a jet crash in 2018. He worried immediately for Jenna and Julia Collins, two Navy lacrosse players who were bound to flight school.

Parents of fallen Navy officers embrace Hoffmann when they see him.

"I can't tell you how much I get from how grateful they are that I have captured these moments when their son was here and was happy and was at his athletic best," Hoffmann said.

Publicly, Hoffmann knows his most meaningful photos are the ones immortalizing dead Naval officers in youth's twilight. Hoffmann spent the past week uploading images from previous games to social media, where players of old respond with stories of their athletic glory days. Those sparks of nostalgia and joy inflame in Hoffmann's heart when he sees it.

"People may not think it's a big deal, but it is to me," he said. "I like giving these guys a little bit of a memory of those days."

Navy sports information director and senior associate athletic director Scott Strasemeier becomes inundated with hundreds of requests for photos from television networks and newspapers before the Army-Navy game, and Hoffmann delivers. With every story, social media post, or headshot taken of an athlete from one of the 33 varsity Navy programs, Hoffmann delivers.

"It's a monster job that he does, and nobody cares about Navy athletics more than Phil Hoffmann," Strasemeier said. "I don't think people understand how important photos are to everything that we do."

Of course, as legendary as Hoffmann's become in the Naval Academy community for his four decades of sports photography, he didn't come into it completely normally.

With a proud Navy officer as a father, Hoffmann was never going anywhere but the Naval Academy. He flourished, graduating in 1973, rising to lieutenant commander, and for nine years, he served. But photography still tugged at him.

When he explained himself to the psychiatrist at Tripler Army Medical in Hawaii he'd been sent to, the doctor told him his plan made sense — and that was good enough for Hoffmann.

He wasn't very good, but he had personality, Hoffmann said, and was ready to work. After retiring from the Navy in 1982, he found his way back to the Naval Academy within a year, where'd he'd sent black-and-white stills of the football games he'd developed in an at-home dark room to The Capital newspaper for $25 a photo.

But there wasn't a Naval Academy sports photographer job. There was, however, a job filming Navy football practice. The only pictures taken were team photos of football, basketball and lacrosse.

When the person who held that role at the time died — Hoffmann swears he didn't kill him — Hoffmann applied, figuring it would be a foot in the door for something else. Journalism, maybe.

They took him to a room that housed a 15-foot film processing machine with a dozen tanks and a spool system. The machine would guide raw film through different stages of preparation — if the person wielding it knew how it worked.

"This is where the scam artist comes in," Hoffmann said.

He spied the machine's name — "Houston Fearless" — which was completely foreign to him. So, he turned to the others and said, "Oh, it's a Houston Fearless."

It worked so well that Hoffmann found himself standing in a room with a machine he didn't know how to use with spring football three weeks away. But inspiration hadn't abandoned him yet.

So, he told the Naval Academy staff that the machine had just been sitting for months, gummed up, unusable — we need to send out a specialist.

That specialist came, tinkered with the machine for a week, and in that time, taught Hoffmann how to shoot a movie camera, how to develop the film, and everything else he needed.

But shooting film of football practice — like the job entailed — wasn't Hoffmann's goal. He suggested bringing on some students who wanted to get out of marching to take and develop film, learn a new skill.

All that left for Hoffmann was to shoot photos.

His second Army-Navy game in 1983 was easily the biggest disaster, when complaints and heavy costs surrounded the decision to play at the Rose Bowl in Pasadena, Calif. While the students shot the film, Hoffmann waited in the end-zone next to Navy's artillery cannon — which used to be much bigger, and real. On one play, star running back Napoleon McCallum careened towards Hoffmann, ball in tow, gunning for a touchdown.

Hoffmann didn't know what he shot back then — unlike today, when you can check your digital camera, you'd have to wait until it was developed.

A week later, Hoffmann spread out all his film on a light table with a trash can next to it and spotted the play shot — McCallum holding the touchdown ball in the air while the cannon shot a plume of fire and smoke behind him.

"Holy [expletive]," Hoffmann said. "I've been in this business nine months and I've already taken the best picture I'll ever take — so the pressure's off."

Hoffmann branched out from football to shooting the other Navy sports too. Everyone loved it, he said, because no one had ever done it. Video grew in prominence; Navy hired full-time videographers.

"And all of a sudden, I became the full-time photographer they never intended to have," Hoffmann said.

Strasemeier began work at the Naval Academy 31 years ago. He can't imagine it without Hoffmann.

"Phil gets it. Phil gets the mission," Strasemeier said.

A few years ago, Hoffmann lost his full-time status and was hired back as a contractor. It was easier, really, to send photos from his studio rather than a Naval Academy office.

The changes haven't diminished Hoffmann's desire to do it. The athletes are still competing, including sons and daughters of athletes he'd shot before.

The Naval Academy has him take "hero portraits," studio shots of athletes posing in dramatic lighting. Strasemeier sees how the players are floored when they see the wild-haired photographer is a Navy grad. Hoffmann likes it because he gets to talk to the athletes about their lives, their sports. One portrait he took of a rower, holding her oar.

Hoffmann remembers how much fun she had, he said, "because she felt special. Someone was paying attention to a crew athlete."

He doesn't expect to retire. If he does, maybe he'll join the former Midshipmen clamoring for him to join them in the stands. Maybe, he joked, he'll ride one of his horses down to the middle of the field and thrust his camera to the ground like a spear.

But it's unlikely. Photography, the former Naval officer said, is probably the one thing he was ever good at. He's got 40 years of Navy photos to prove it.

"In my mind, that's been a life well lived. But that's history," Hoffmann said.