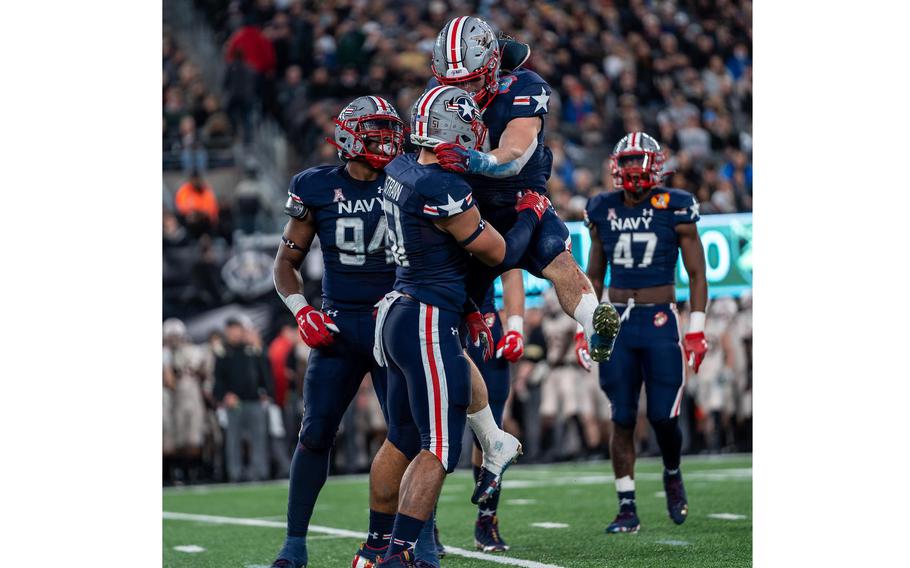 Navy players celebrate Saturday, Dec. 11, 2021, on the way to a victory against Army at MetLife Stadium in East Rutherford, N.J. (Facebook)

EAST RUTHERFORD, N.J. (Tribune News Service) — A year after the Army-Navy game was played with only midshipmen, cadets and Department of Defense leaders in the seats, a capacity crowd witnessed a game worthy of the historic rivalry Saturday at MetLife Stadium in East Rutherford, New Jersey.

All the traditions were renewed and the crowd engaged for the 122nd Army-Navy game. After the march on, Navy players honored Brian Bourgeois, a Navy officer and Naval Academy graduate who died from injuries sustained during a training accident, by carrying a SEAL Team 8 flag when they ran on the field.

In a game featuring high-octane offense early and stellar defense late, Navy rallied from a 13-7 halftime deficit to win 17-13 in a hard-fought battle. Navy sophomore quarterback Tai Lavatai led the way, running for 62 yards and two touchdowns, including the go-ahead score with 9:02 left in the third quarter.

And perhaps the most memorable moment came when Navy linebacker Diego Fagot carried the ball for first down on a fake punt in the fourth quarter. That contributed to a drive that burned almost nine minutes from the game clock and resulted in a Bijan Nichols 49-yard field goal, the final score of the game.

With less than two minutes remaining in fourth quarter, Navy stopped Army on fourth down to seal the victory. With the win, Navy’s lead in the historic series expands to 62-53-7.

Before the game, almost everything about the Army-Navy game appeared normal in the parking lots. You could squint and believe normal times had returned to America’s Game. Flags flew, tents pitched, sausages sizzled, music blared, sharp and unfiltered alcohol filled red solo cups before noon.

Normal, except for the vaccine site.

Vaccination stations have become commonplace at sporting events, but the one that stood before MetLife Stadium was a little unique, sitting side by side with VA informational tents. The medical officials drew their own little sign, hoping people would see it on their way in.

“But that’s the pandemic, right?” said Tanya Bradsher, chief of staff for the Department of Veterans Affairs. “We’re enjoying a football game, tailgating and having a great time. Then we have the backdrop.”

Thirty-eight-year-old Wade Franklin, a 2005 graduate of the Naval Academy now living in Louisiana, crossed into the last lot before the stadium’s entrance when the doctors asked him if he wanted a vaccine.

“I was not expecting it,” he said. “Just walked up, saw it. They gave us a quick sales pitch. It’s easier for me to just do it right now. Hey, it’s easy enough. It’s unique.”

Bradsher said VA officials saw this game as an opportunity to get veterans vaccinated and boosted while educating them on other services.

“Anything we can do to take care of our veterans is vital,” she said.

Many in the lot served in the military themselves. Some are just beginning their service with a much fuller understanding of what the Army-Navy game is like than anyone.

Myles Fells, CJ Williams and Dalen Morris rolled into the tailgate lots around noon, now as tourists for the first time. The three competed in the glorious 2019 game in which the Midshipmen embarrassed Army 31-7 — the last time before a crowd — and Fells and Morris played in the not-so-memorable 2020 defeat, closed to crowds at West Point for coronavirus safety’s sake.

Fells woke up Saturday morning and felt that tug to the field, jitters in his stomach. Then, he remembered he wasn’t a football player anymore.

“It’s kind of weird. You still feel like it’s game day,” he said.

But before 2018, they’d never made it to a game. It’s the atmosphere that drew them.

“Even though it’s a battle between Army and Navy before the big game, in the end everyone’s going to come together in the end,” Soule said.

Now, in 2021, they’re back again. And they haven’t seen each other since the pandemic’s start.

Gina Lavatai’s a newbie and with good reason. Her son, Tai Lavatai, is only a sophomore quarterback for the Mids. She wandered around the tailgates with her son Toa, drinking in the size of it. Though the moment Tai takes the field will mean even a little more.

“My heart is overflowing with pride — he has always talked about playing in a stadium with 80,000 and here we are. The game is so much more than football and what better place to live out his dream,” she said. “I know I will cry!”

Steven Voyles is also experiencing his first game. He enlisted with the Navy in 2011, where he served until 2017 before moving to Philadelphia, a week before lockdown.

During his time in the Navy, “ Beat Army“ was as present as water as most of his fellow officers attended the Naval Academy. Now, he actually has the chance to see what it means.

“To see the rivalry between the two while the game is going on, to see how the fans interact,” he said. “How the players interact. Especially in boot camp, they drill tradition into you. Now I get to see this 100-year-old-plus tradition.”

Visit The Capital at www.hometownannapolis.com