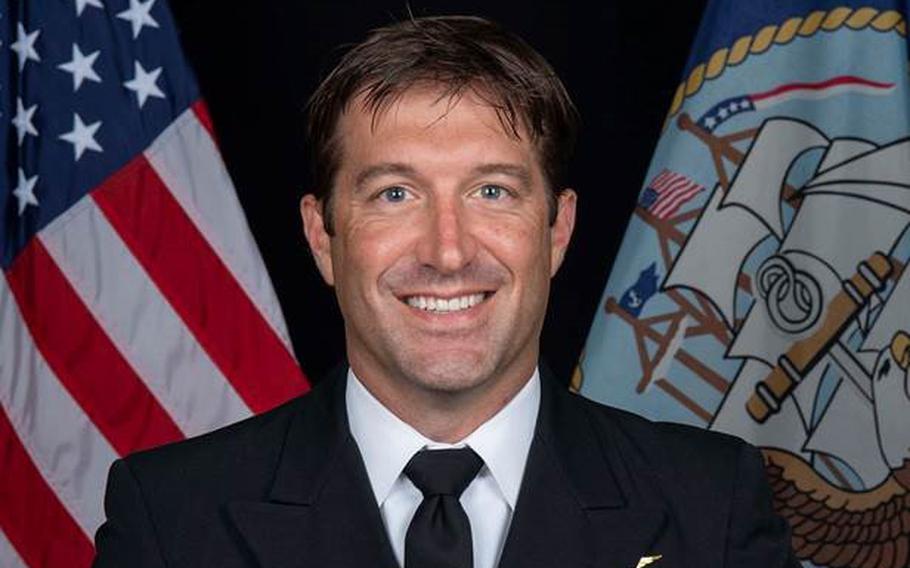 Navy Cmdr. Brian Bourgeios, 43, the commanding officer of SEAL Team 8, died Tuesday, Dec. 7, 2021, after he was hurt in a training exercise over the weekend, according to the Naval Special Warfare Command. (U.S. Navy)

ANNAPOLIS, Md. (Tribune News Service) — When word spread among the fraternity of former Navy football players that 2001 graduate Brian Bourgeois had been seriously injured in a military training accident, there was naturally shock and concern.

However, among all those who played for the Midshipmen alongside Bourgeois from 1997 to 2000, there was a universal belief the decorated Naval Special Warfare officer would somehow pull through.

Brad Wimsatt, another former Navy football player and Class of 2001 graduate, was among many who learned the news Sunday and started praying for a full recovery.

“Brian was a true warrior — just so tough and so strong. Among his former teammates ... to a man we thought for sure he would make it,” Wimsatt said. “Despite how serious the injuries were, we had faith he would find a way.”

“To get that notification on Tuesday morning was just absolutely devastating,” Wimsatt said. “It’s hard to find the words, honestly. I feel such a sense of profound loss, and I feel so horrible for Megan and the kids. He was such a great husband and an incredible role model for his sons and daughters.”

Initially commissioned as a surface warfare officer, Bourgeois felt a calling to serve with the Navy’s elite sea, land and air forces — commonly known as SEALs. Those units routinely perform dangerous, secret missions such as inserting or extracting a military member, capturing enemies for interrogation or arrest, and performing reconnaissance or underwater missions among many other duties.

Of the approximately 1,000 candidates who enter Navy SEAL training each year, only about 200 to 250 succeed. Bourgeois excelled during Basic Underwater Demolition/SEAL training, a 24-week course that is famously brutal. He also aced the three-week parachute jump course and 26-week SEAL Qualification Training before being awarded the coveted Nay SEAL Trident.

Bourgeois, who was commanding officer of SEAL Team 8, was injured during a training exercise held Saturday off Virginia Beach. Details of the accident are under investigation, but initial indications show the tragedy occurred during a fast-rope training evolution, an exercise that involves sliding down a rope from a hovering helicopter.

“There is no doubt in my mind that Brian was leading from the front when this incident happened,” said Wimsatt, who is among the many members of the Navy football Class of 2001 who remain seriously shaken by the death of Bourgeois.

“I think everyone is walking around in shock and disbelief. We all thought we were at a point in our lives when we were past the risky stuff,” added Wimsatt, who retired from active duty in 2016 after serving as a Marine Corps pilot flying the Harrier jet.

Bourgeois had recently returned to Annapolis for the Naval Academy Class of 2001 20th reunion. He participated in various events that were centered around the Navy-Cincinnati football game on Oct. 23.

Bourgeois brought a couple members of his SEAL Team 8 so they could experience the unique atmosphere of a Navy football game day, which is always highlighted by the Brigade of Midshipmen march-on and flyover of fighter jets. Wimsatt spent time with the men who served under Bourgeois and came away even more impressed with his close friend and classmate.

“You could hear in their voices how much they truly looked up to Brian as a leader and mentor. You could see the love they truly had for him,” Wimsatt said. “We’ve been talking among the brotherhood that Brian was absolutely the best of us. Just a loving, caring human being as well as an extremely impressive professional.”

Bourgeois will be honored in several ways during Saturday’s Army-Navy game at MetLife Stadium in East Rutherford, New Jersey. Navy will have one player carry a SEAL Team 8 flag when the team runs out of the tunnel onto the field along with the traditional American, Navy and Marine Corps flags.

Those patches were given to Navy wide receivers coach Mick Yokitis, a 2006 Naval Academy graduate, by Bourgeois earlier this year.

Members of the Navy Football Brotherhood organization mobilized to find a way to get the entire Bourgeois family to MetLife Stadium so they could see the tributes in person.

Bourgeois grew up in Lake Charles, Louisiana, then moved to Texas and graduated from J.E. Taylor High in Katy. He was a direct-entry football recruit to the Naval Academy and became a four-year member of the varsity and three-year letterman.

Brian Broadwater became fast friends with Bourgeois from the time they met during plebe summer in 1997. They were side-by-side in the Navy football locker room in the basement of Ricketts Hall because Bourgeois wore No. 13 and Broadwater No. 14.

Broadwater would become Navy’s starting quarterback in 2000, while Bourgeois was a backup safety and member of the special teams that were nicknamed the “Mad Hatters.”

“Brian was one of those guys that played on every specialty unit and was always willing to sacrifice his body,” said Broadwater, recalling that Bourgeois would run downfield on punt or kickoff coverage with reckless abandon.

“All the attributes we saw from Brian on the football field in the late 1990s make it clear why he succeeded in the NSW community.”

Broadwater and Bourgeois would remain close while each enjoying lengthy naval careers. Captain Broadwater is currently the military deputy director of athletics at the academy after previously serving as commanding officer of VFA 103, an F/A-18 strike fighter squadron nicknamed the “Jolly Rogers” and based in Oceana, Virginia.

Because they were based so close together, Broadwater and Bourgeois got together often, and their respective families have gotten to know each other well. “This is a very sad time for the entire Bourgeois family and my heart aches for Megan and the kids,” Broadwater said.

When Broadwater learned that Bourgeois had been injured, he drove from Annapolis to Norfolk to comfort Megan and the children. He heard various reports from the medical team and was confident his friend would recover.

“When I left the hospital I had a certain expectation in my mind, but the internal injuries were just too much, and Brian finally succumbed on Tuesday morning,” he said. “This has been an extremely tough week for me personally. We are all very much in mourning right now.

“Brian was someone I always looked up to because of the way he carried himself — as a son, as a teammate, as a husband and as a father.”

Bourgeois possessed that unique combination of supreme confidence and tremendous humility. He was the ultimate competitor, yet instinctively compassionate.

“Brian had a great personality and an engaging smile. He certainly was not unassuming, but if you walked into the room, he was not the dominating presence,” Broadwater said.

‘Led with his heart’

Broadwater had an opportunity to visit with Bourgeois and Seal Team 8 during a professional development exercise in Little Creek and came away amazed how the commanding officer projected obvious leadership without being overbearing.

“Everyone knows who’s in charge, but Brian was not the type to flaunt it. He was the highest quality of being a servant leader and made everyone feel welcome,” Broadwater said.

Former teammates marveled about Bourgeois’ ability to maintain relationships through regular contact and simple acts of kindness. He held an incredibly demanding, time-consuming position, yet managed to regularly reach out to others to let them know he cared.

Davede Alexander played in the defensive backfield alongside Bourgeois for four years at Navy and they developed a strong bond. It all began before, during and after their first football practice as plebes.

“Brian was the first person I talked to on the opening day of football training camp,” Alexander said. “We became friends while sitting next to each other eating box lunches after practice.”

While serving as young surface warfare ensigns, Alexander and Bourgeois were both stationed in Newport, Rhode Island, along with several other former Navy football players. They stayed in close contact wherever the service took them. When Alexander worked in admissions at the Naval Academy and did considerable traveling, he routinely allowed Bourgeois and his family to stay at his home.

Now out of the Navy and living in Crofton, Alexander is going through a difficult divorce while at the same time trying to run a consulting business. Bourgeois sensed his friend needed support, so he took a week off from commanding Seal Team 8 and came to Maryland to help Alexander move into a new apartment.

“Bouj just wanted to look out for me and be there as a friend and it meant an awful lot,” Alexander said. “When you have that type of authentic, genuine leadership and comport yourself in such a humble way, it is only natural that others will follow you.”

Alexander had no doubt Bourgeois would accomplish great things in the military because the energy, passion and leadership were on display every day during Navy football practice.

“Brian played football for the love of the game and the love of his teammates. He always left it all out on the field,” Alexander said. “I was not at all surprised when Bouj decided to become a SEAL. I think internally that was always on his mind as far as taking on the toughest challenge.

“Bouj always had that get-it-done mentality.”

Members of the Navy Football Brotherhood, especially those from the Class of 2001, are focused on supporting the Bourgeois family in whatever way possible. They are promoting two platforms donating funds to help support the family following the loss of income.

“Our primary goal is to see what we can do in the short-term to provide Brian’s family with support. It’s going to be a long, hard road for them,” Broadwater said. “We also want to find the proper way to memorialize Brian.”

The Bourgeois family was not planning to attend this year’s Army-Navy game. The Navy Football Brotherhood worked overtime to arrange transportation, lodging and tickets so Megan and the five children could see their husband and father honored. Also coming to MetLife Stadium Saturday are Bourgeois’ parents, David and Marlene, along with his sister Sarah and brother Brad.

Bourgeois grew up in the Louisiana woods hunting and fishing with family and friends. That humble background and laid-back demeanor belied an intelligence that would ultimately enable Bourgeois to earn a master’s degree in defense analysis from the Naval Postgraduate School, where he was presented with the Pat Tillman Leadership Award for his graduating class.

“Bouj always led with his heart. He was a truly special person who cared deeply about everyone around him,” Alexander said.