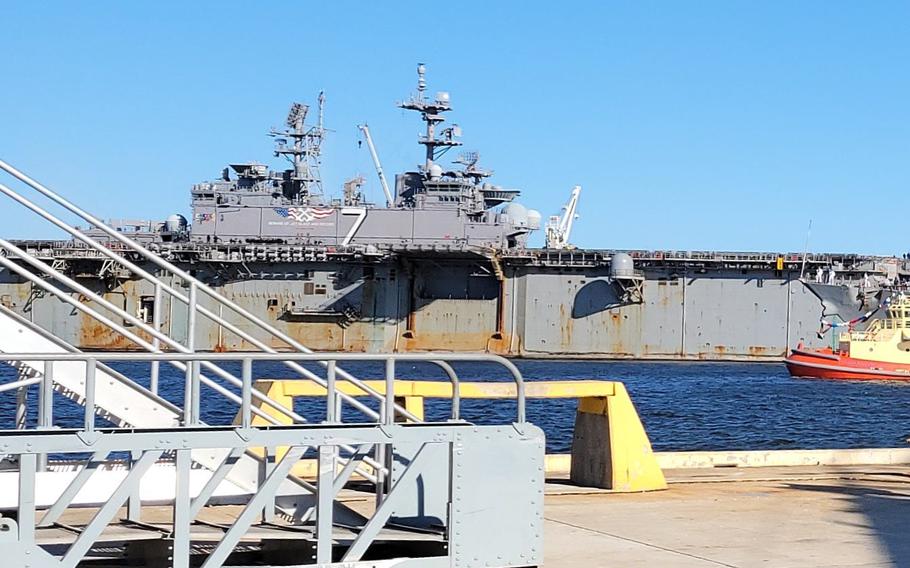 The USS Iwo Jima, an amphibious assault ship that earned its nickname due to its hull designation LHD-7, departs after completing three deployments, the most recent ending in an October homecoming.

"On behalf of Iwo Jima's crew, I would like to personally thank Naval Station Mayport and the Jacksonville community for the support they have provided the ship and her crew," Capt. J.A. Krier said. "Though we have enjoyed our time at Naval Station Mayport, the crew is excited for the transition to Norfolk and is ready to make a positive impact on the community here."

The Iwo Jima is one of eight Wasp-class ships built to handle a U.S. Marine Corps Expeditionary Unit with landing craft, helicopters and AV-8B Harrier II attack aircraft. The 41,150-ton vessel's design is similar to an aircraft carrier.

The move has been expected for nearly a year as part of a buildup of destroyers at Mayport that also included the reassignment of the amphibious transport dock ship USS New York to Norfolk.

The dock landing ship USS Fort McHenry also was retired this year as the station's other amphibious vessel.

In return, the Navy said Mayport will be gaining five ships by the end of next year, The Florida Times-Union previously reported.

The balance is projected to have "a negligible economic impact on either community," the Naval Surface Force Atlantic said. 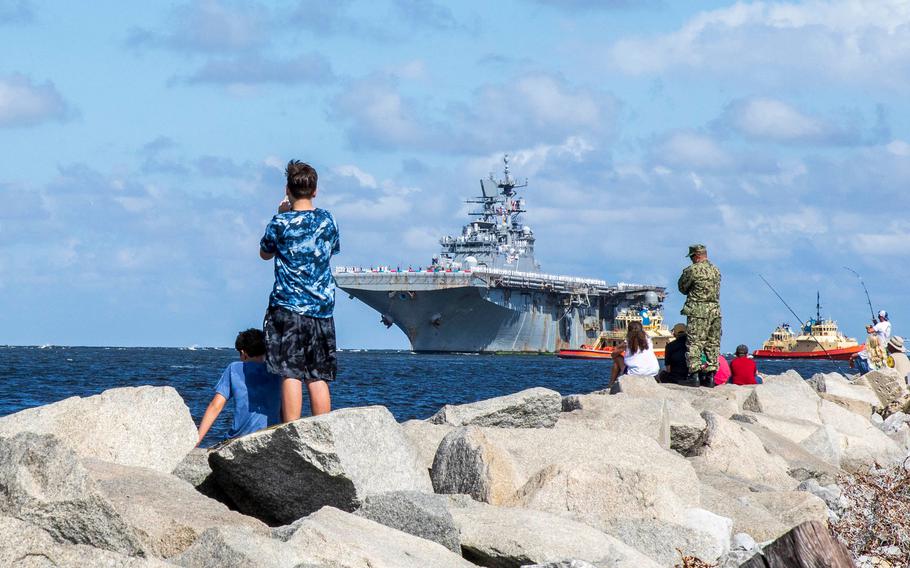 A brief history of the Iwo Jima

Commissioned in mid-2001 in Pensacola, the Iwo Jima's initial homeport was Naval Station Norfolk until moving in August 2014 to Mayport. The second ship to bear the namesake, the 831-foot-long Iwo Jima honors the World War II battle on the Pacific island of the same name that claimed the lives of over 7,000 Americans and almost 21,000 Japanese in 1945.

The ship's first deployment was in 2015, part of a three-ship/2,300-sailor amphibious ready group sent to the Middle East as a major crisis erupted in Yemen. That is when the U.S.-backed government was overthrown by Houthi rebels, threatening the U.S. embassy.

The deployment saw the Iwo Jima participating in training exercises and strategic trips through the Strait of Bab-el-Mandeb between the Arabian Peninsula and Africa.

In mid-2019, 11 sailors suffered minor injuries after the USS Iwo Jima reported a fire in a cargo hold. The blaze was extinguished by its crew, sailors from USS The Sullivans as well as the Jacksonville Fire and Rescue Department.

The Iwo Jima just returned in October as the flagship of a seven-month deployment to the U.S. 5th and U.S. 6th Fleet areas of operation. It also supported the U.S. withdrawal from Afghanistan.

Preparing for the redeployment to its original homeport so soon after that earned the commander's praise, Krier saying that to do both "takes a tremendous amount of work and preparation from the crew and the families."