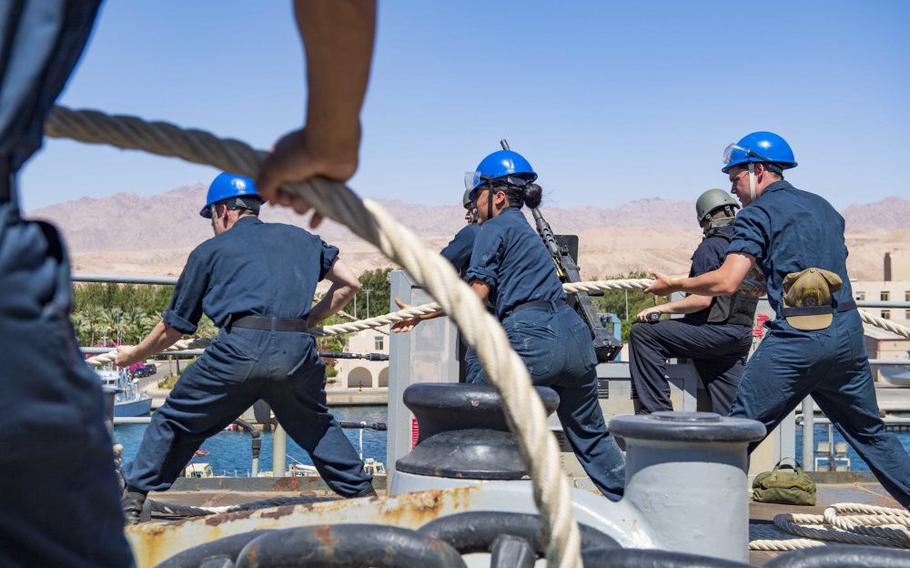 NEWPORT NEWS, Va. (Tribune News Service) — More than 100 days at sea without a single COVID-19 case, the sailors and Marines of the Virginia-based Iwo Jima Amphibious Ready Group aren’t letting their care to keep the pandemic at bay get in their way.

Working alongside the Norwegian, British and French navies, the ships and aircraft at the group have landed Marines on Norway’s military training grounds, after figuring out how to minimize contact with allied troops and civilians who may not have been vaccinated.

Operating closer inshore than normal, using the shelter of Norwegian fjords to shield the group’s USS Iwo Jima, USS San Antonio and USS Carter Hall from the worst of the wild waters of the North Sea, the group’s ships hosted Norwegian officers to help them understand that nation’s rules for operating in its airspace and seas. Sailors from the Greek Navy have been on the flight deck of the Carter Hall, to support their pilots operating off the ship.

“We work on interoperability, and we’re building trust with our friends,” said Capt. Darren Nelson, the Iwo Jima group’s commodore.

Last year, Navy ships operating with allies usually had to do that trust-building and coordination remotely; this year, there’s been a chance to work side-by-side.

Of the 4,300 men and women of the group, more than 94% voluntarily lined up to be vaccinated as they headed east from Norfolk, Virginia, in February. At sea, they’ve been following the guidelines set in Hampton Roads and by the Sixth Fleet, which itself has seen no COVID-19 among the sailors and Marines of U.S. Naval Forces Europe/Africa.

While the group has made port visits in Europe and hosted visitors, it has maintained a COVID-19-free bubble, said Capt. William Wallace, officer in charge of Fleet Surgical Team Six, which embarked with the group’s sailors and the 24th Marine Expeditionary Unit.

“In those events we might have seen someone contract COVID-19 yet with our thorough mitigation efforts we were able to protect our most vital asset, sailors and Marines,” he said.

For the Iwo Jima group, being COVID-19-free has meant some restrictions have eased — on the group’s way to the Middle East, sailors and Marines had a chance to go ashore to see the sights and enjoy some beach time on the Greek island of Crete, keeping in small groups and maintaining social distancing.

“Crete is really something to see,” Nelson said.

Before stopping in Crete, meanwhile, the group’s fighters played the role of enemy aircraft to help the Royal Navy’s new carrier, HMS Queen Elizabeth, certify its crew as ready to deploy.

The group was among the 19 ships from 11 nations that participated in the first part of NATO’s big Steadfast Defender exercise off the the coast of Portugal May 30, an exercise led by Vice Adm. Andrew Lewis, commander of NATO’s new Joint Force Command Norfolk and the U.S. Second Fleet.

The Steadfast Defender work focused on the challenges of trans-Atlantic military reinforcements, particularly when near European shores where air and sea attacks could be most intense. The Queen Elizabeth, fresh from defending against the Iwo Jima group’s mock attacks, drilled on attacking, while the other NATO ships practiced defense.

After transiting the Suez Canal earlier this month, the group now faces yet another different pandemic situation. Nelson is hoping it may mean still more chances to get off the ships and the piers they moor on when making port calls.

“We think about this every day, it takes a lot of work,” Nelson said .“Dealing with COVID is part of our mission.”