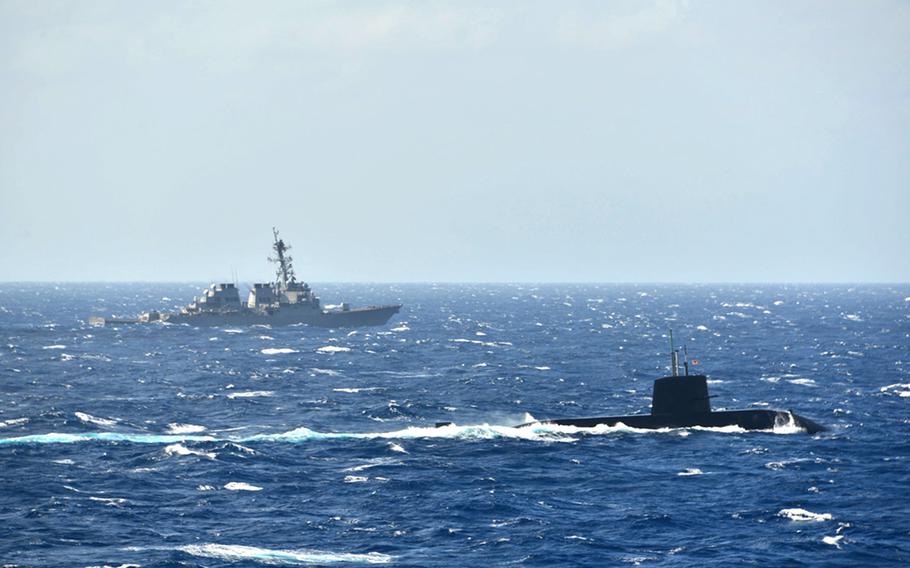 Japanese and American warships met in the South China Sea on Tuesday for an anti-submarine warfare exercise, the first of its kind by the allies in the contested waters.

An unidentified Japanese submarine also participated in the exercise, according to photographs included in the release.

The training was yet another chance for the two navies to work together and improve their knowledge of one another’s equipment and training methods, Task Force 71 spokesman Lt. Cmdr. Joseph Keiley told Stars and Stripes in a Wednesday email.

“The focus of the exercise was to test each unit’s capabilities in tracking submarines and working together to do so,” he said. “Our alliance is strong because of the close engagement that happens through events like this, where we work through shared challenges enabling security and stability and demonstrate our common vision of a free and open Indo-Pacific.”

While the U.S. and Japan routinely train together in the waters surrounding Japan, this was the first anti-submarine exercise to be held by the two countries in the South China Sea.

The training occurred as President Joe Biden and Chinese President Xi Jinping met in a virtual summit Tuesday aimed at improving relations between the two global competitors and reducing tensions between them in the region.

It also took place just a month after a U.S. nuclear-powered submarine collided with an undersea mountain in an unnamed portion of the Indo-Pacific region. While the exact location of the incident was never publicly disclosed, an unnamed defense official said it occurred in the South China Sea, according to an Oct. 8 report from U.S. Naval Institute News.

The collision prompted outrage from China’s Ministry of Foreign Affairs. In addition to accusing the U.S. of concealing details of the incident, spokesperson Zhao Lijian called it another example of the U.S. “making trouble in the South China Sea in the name of ‘freedom of navigation.’”

Beijing’s claims over much of the South China Sea are mostly unrecognized by the U.S. and its allies. The region has been the stage for rising tensions between the U.S. and China in recent years.

Keiley said Tuesday’s training was not in response to any specific event.

The exercise foreshadows further activity between Japan and the U.S. over the next several weeks.

Minesweeping drills between the U.S. and Japan is scheduled for Nov. 18-28, according to the Ministry of Defense.

An exercise between naval forces of Japan, the U.S. and France is scheduled for Dec. 15-17 around Okinotorishima, a Japanese-claimed atoll in the Philippine Sea. The training will include the helicopter carrier JS Hyuga, the French navy’s attack submarine FS Émeraude, the destroyer USS John S. McCain and a Navy P-8A Poseidon aircraft.