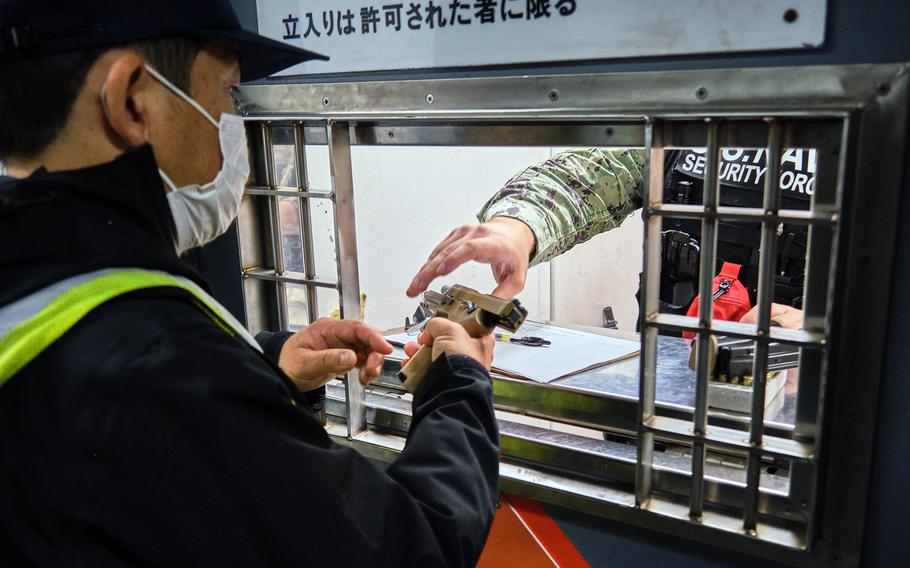 As part of a servicewide transition, security officers have been training with the SIG Sauer M18 pistol, which is replacing the M9. The Navy adopted the M9 in 1985, according to Yokosuka’s head of security, Lt. Cmdr. Roel Rosalez.

At Yokosuka, the transition meant more than 31,000 rounds fired by approximately 350 security officers as they became certified to use the new sidearm over the course of nearly a month.

“For a single person, it’s roughly about 12 to 16 hours [of training] from beginning to end,” Petty Officer 1st Class Gasper Peña told Stars and Stripes on Wednesday. “It took us approximately two weeks to accomplish all of the actual training and evolutions, and then an additional two weeks on the administrative side.” 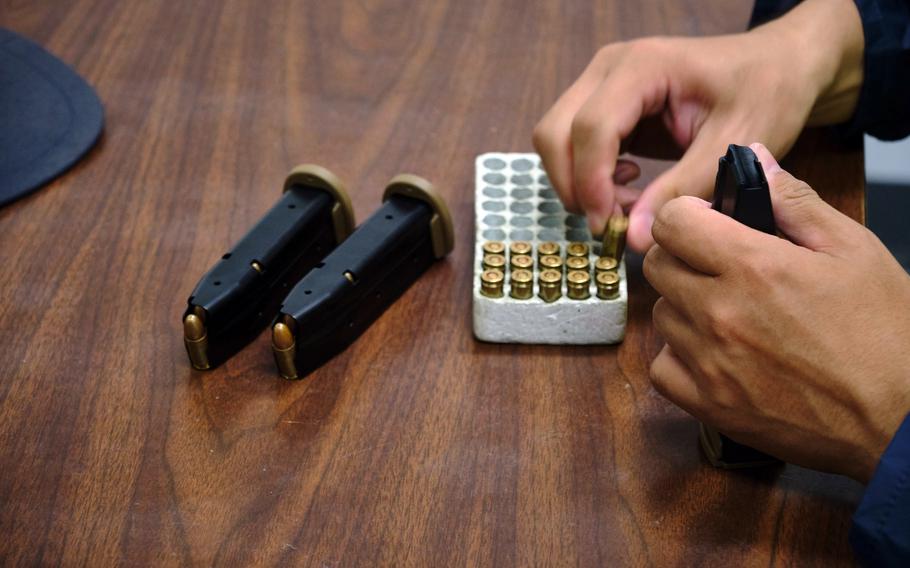 Buy Photo
Advantages of the M18 over the M9 include a lighter weight, easily replaced components and a larger magazine capacity. (Daniel Betancourt/Stars and Stripes)

Peña, an armory supervisor at Yokosuka, said the Navy has been transitioning toward the M18 for nearly a decade, a process that was delayed because the pistols initially lacked certain features, such as an external safety catch.

“We’re talking 10 years ago; that’s literally when I joined the Navy,” Peña said. “Ten years later, we finally got them, and it’s a really, really good weapon system.”

Yokosuka is likely the first Navy installation outside of the United States to put the new weapons into service, according to Rosalez and Peña.

Other installations in Japan are in “various stages of the transition to M18s,” Cmdr. Katie Cerezo, spokeswoman for Naval Forces Japan, said in an email Friday. However, she could not comment on specifics “as a matter of policy.”

A spokesperson for the Navy Chief of Information could not be immediately reached Friday for comment regarding the M18’s rollout across the service.

Advantages of the M18 over the M9 include a lighter weight, easily replaced components and a larger magazine capacity.

Yokosuka security officers will be carrying three, 17-round magazines, meaning an increase of six rounds per person over the three, 15-round magazines carried with the M9.

Peña said security personnel at Yokosuka score about 10% higher on the range with the M18 than they did with the M9.

“I think this weapon will be easier for sailors, as far as drawing and using the weapon because it’s lighter, smaller and more compact,” Peña said. “It’s going to be more comfortable when they’re doing their daily duties.”

The new pistols are also approximately $6 cheaper than the M9, coming in at $580 per handgun.

Rosalez declined to reveal how many pistols the base has ordered but said there would be enough to adequately arm security personnel.

The M18 and its larger M17 variant are customized versions of the civilian-use SIG Sauer P320 pistol, developed under SIG Sauer’s Modular Handgun System program. Over the past several years, the Marines, Air Force and Army have also begun to phase out their older handguns for the SIG pistols.

In November 2020, the weapons manufacturer delivered 200,000 M18s and M17s to the U.S. military, a milestone that coincided with the first month it had delivered handguns to all the armed services, according to a news release.

The Army in 2017 was the first service to begin using the M17 and M18, after a $580 million contract was awarded to SIG Sauer that year. The contract called for a delivery of 480,000 pistols over 10 years to the Army, Navy, Air Force, Marine Corps and Coast Guard.

The Air Force began fielding the pistols in 2019, and the Marines followed suit in 2020.