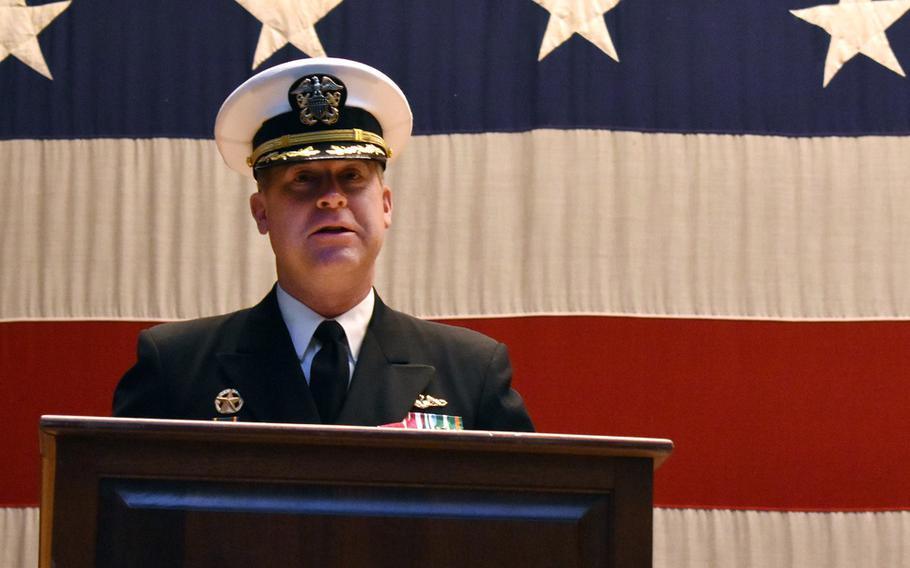 After becoming commanding officer in May 2019, Moore will now be on the staff of the Undersea Warfighting Development Center, headquartered on the base. Moore, 48, lives in Stonington with his wife and two kids, ages 15 and 13.

“No one is better at leading by example than Todd,” said Rear Adm. Charles W. “Chip” Rock, commander of Navy Region Mid-Atlantic. He called Moore “the most engaging, intelligent and effective commanding officer with whom I have ever served.”

Rock recognized Moore’s “relentless public affairs campaigns” for leading to one of the highest vaccination rates in the Navy, as well as for focusing on families and for leading a team countering unmanned aerial operations.

Moore gave a humorous, heartfelt and often self-deprecating speech of lengthy thanks, theming it around Richard Scarry’s 1968 picture book “What Do People Do All Day?” but pertaining to the roles of base personnel — from Child Development Center caretakers, to command duty officers, to firefighters, to workers in port operations.

He said that Executive Officer Cmdr. Reg Preston “only leaves me enough busywork to convince myself I’m still in charge,” and that he only got his job because people knew how good his wife, Carrie, would be.

Curtin said as commanding officer, his main lines of effort will be providing for safety and security, supporting tenant commands in their mission and pursing quality-of-life improvements for sailors, families, veterans and the community.

Curtin, 54, said he first walked through the gates of the Naval Submarine Base in 1986 as an 18-year-old enlisted petty officer reporting for basic submarine school. He served on two fast-attack submarines here: the USS City of Corpus Christi and USS Dallas.

“My family and I truly call Submarine Base New London, and all of southeastern Connecticut, home,” he said. He lives in Gales Ferry with his wife, Donna.

His most recent assignment was as the Submarine Force Atlantic prospecting commanding officer instructor.

A communicator through the pandemic

Moore, who has been living and working in southeastern Connecticut since 2013, reflected on his two and a half years as commanding officer in an interview Wednesday.

When he took on the role, he couldn’t have predicted how the world would turn upside down less than a year later, and his main goals were to “be completely engaged with the surrounding communities” and to make sure the base was continually improving its readiness for combat operations.

“Lo and behold,” he said, “we were tested by the pandemic, not enemy action of a human sort.”

The base had to quarantine new people arriving and provide them three meals a day, and Moore called emergency management officer John Varone a hero for standing up contact tracing efforts. Moore turned to the Centers for Disease Control and Prevention, U.S. Fleet Forces Command and Navy Medicine Readiness and Training Unit Groton for guidance and orders.

“There was a lot of learning on the fly,” Moore said, but he noted that people in the Navy are used to being “put in new jobs, many of which we don’t know how to do when we show up.”

Moore thinks his role “was to be a communicator and tell people what was going on,” which included doing weekly videos. He also said he spent a lot of time focused on child care operations.

While dealing with the pandemic, the base continued training sailors and focusing on its mission. There was a simulation this past summer that the base was under attack and facilities were destroyed, and fire chiefs from surrounding municipalities came to the base this week to review lessons learned from major shipboard fires.

In Moore’s time as commanding officer, work began on construction of a new Pier 32, the base worked with Thames River Heritage Park to get final approval for a dock at the Nautilus pier, and a USO center opened on base.

Moore said his next role will involve determining future investment priorities for the submarine force, working with businesses, academia and national labs.

“I will certainly miss the people here and the connections,” he said, calling people at the base a family. “Working here feels like home.”