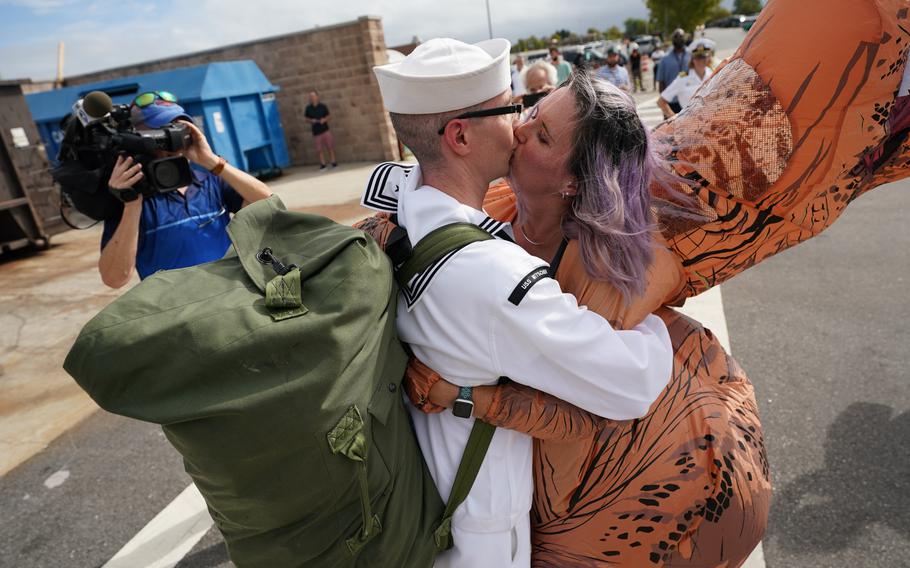 “It’s been a long time coming,” said Petty Officer First Class Robert Hurley, after getting a T-Rex hug and a kiss after his wife, Jerilynn, pulled off the top of the costume.

“This was completely unplanned,” she said.

The plan was for Hurley’s ship, the destroyer USS Mitchser, to be back in June.

The USS Mitscher and the cruiser USS Monterey, which also came back Friday, stayed on deployment longer than the rest of the strike group to continue supporting the withdrawal of U.S. troops from Afghanistan.

The Japan-based carrier USS Ronald Reagan had relieved the Eisenhower, which had extended its deployment to take on that mission, but needed the cruiser to handle missile defense. And the Reagan needed the Mitchser to keep sea lanes open and defend against air attack.

“It’s been nine months of nonstop operations; time to take a big breath and kind of slow down,” said Cmdr. Tom McCandless, the Mitchser’s skipper.

The two ships deployed Feb. 24, after several weeks of exercises. 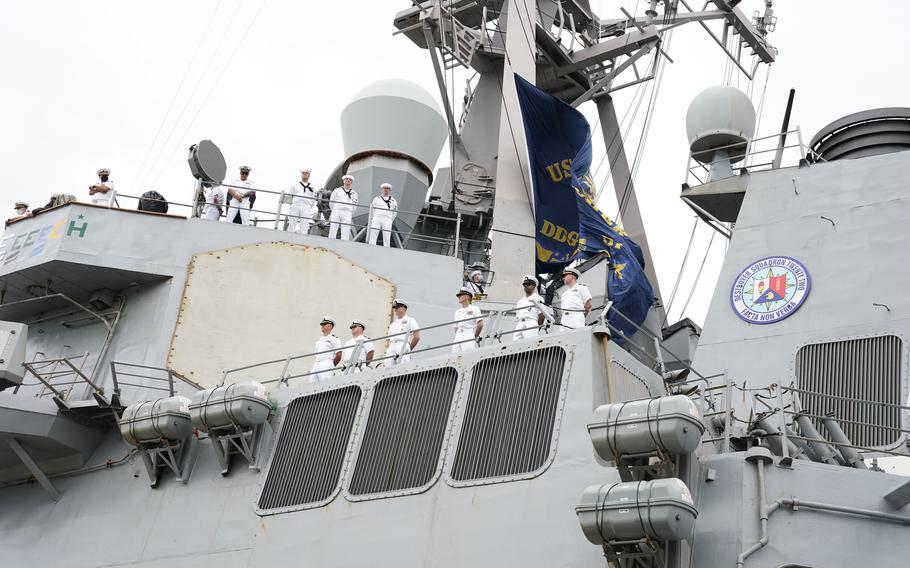 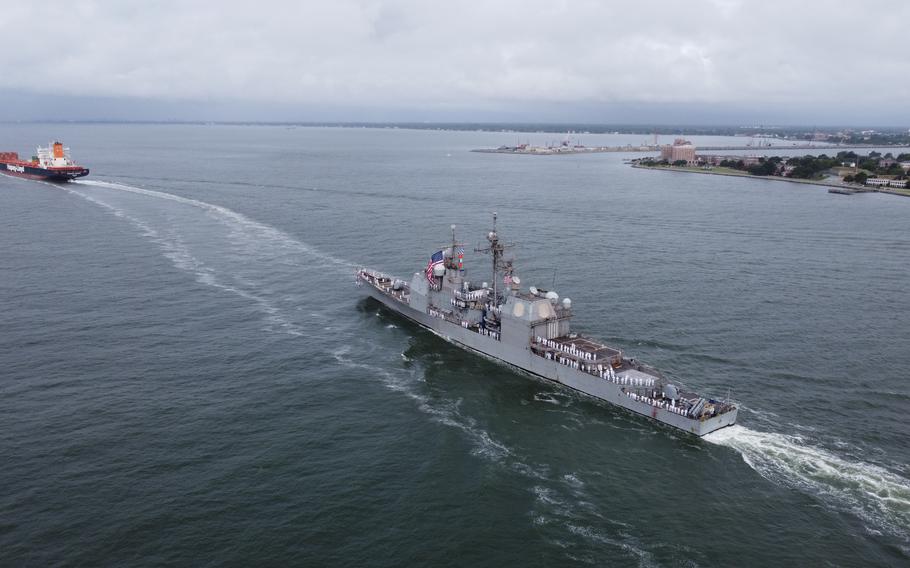 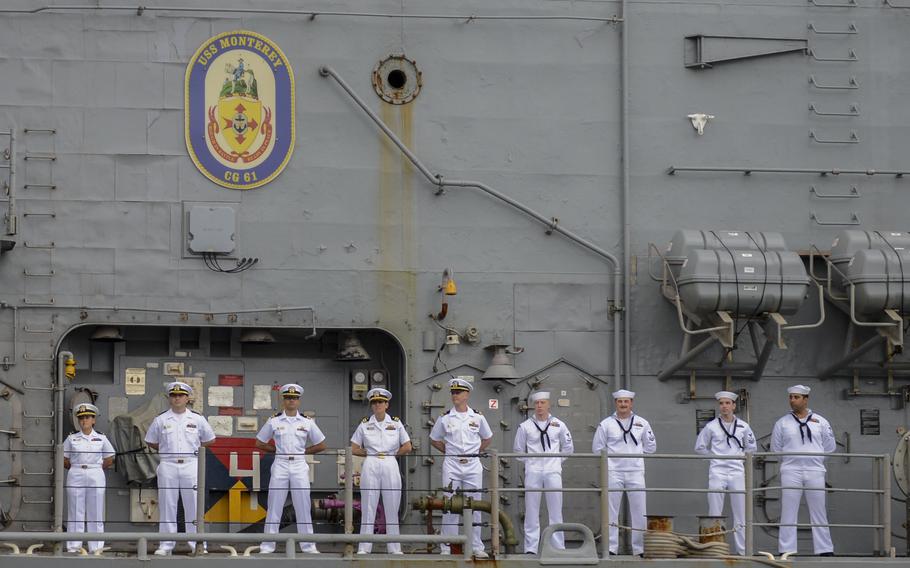 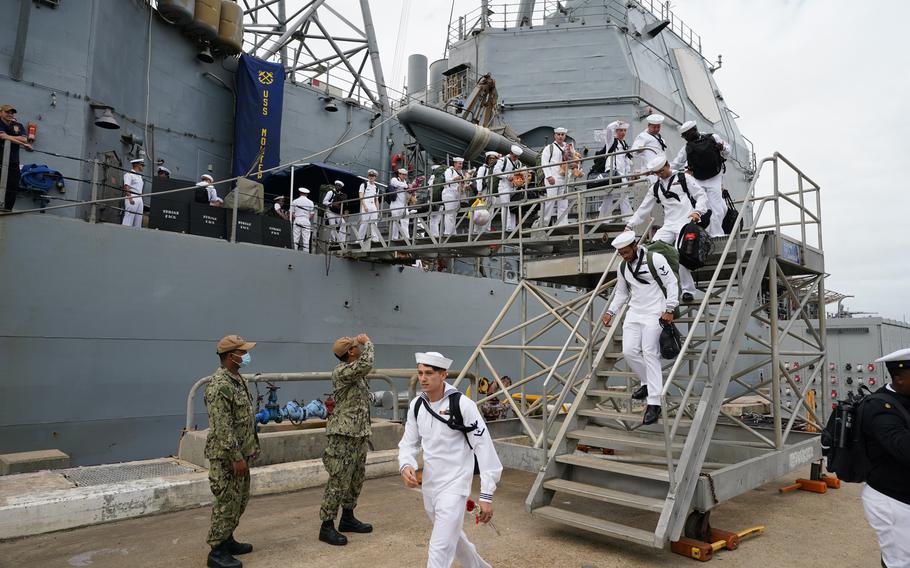 While operating in the Arabian Sea, it seized a large cache of weapons from a smuggler’s dhow, including dozens of advanced Russian-made anti-tank guided missiles, thousands of Chinese Type 56 assault rifles, and hundreds of PKM machine guns, sniper rifles rocket-propelled grenades launchers and advanced optical sights.

“We were all over the place,” said Capt. Joseph Baggett, the Monterey’s commanding officer.

In some of those places, his ship was far from the Eisenhower.

“That’s distributed maritime operations,” Baggett said. But although the term is new and the Pentagon’s strategic emphasis is recent, such operations are old hat to cruisers, he said.

In addition to providing air defense support to the Eisenhower and Reagan, the Mitchser escorted ships through the critical chokepoints of the Strait of Hormuz at the entrance to the Arabian Gulf and the Bab-el-Mandeb at the southern end of the Red Sea.

The Mitchser also responded after the July 30 drone attack on the tanker Mercer Street.