What corporate America can learn from the Navy’s vaccine campaign 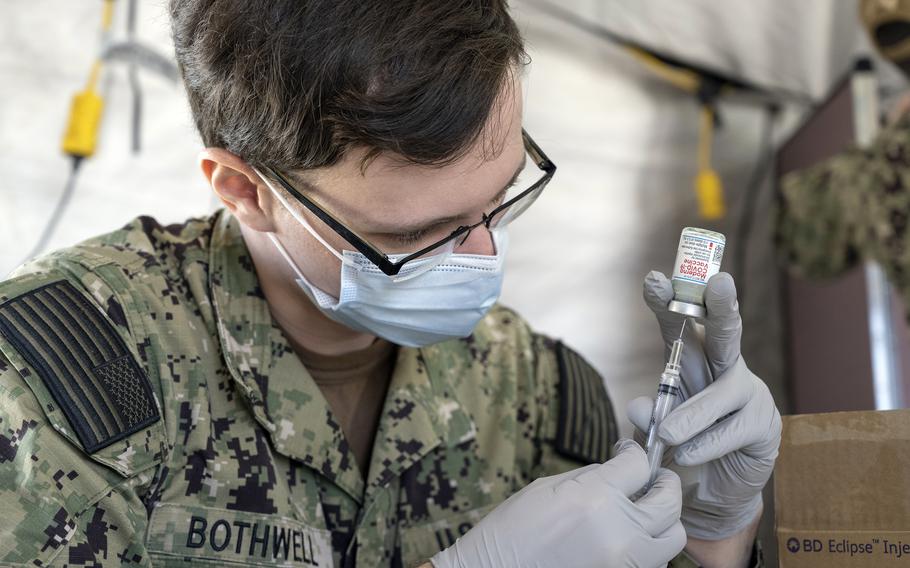 The corporate world may want to take a page out of the U.S. Navy's manual when it comes to boosting workforce COVID-19 vaccination rates.

The Navy is the pride of the U.S. military when it comes to inoculation: 76% of active duty members are fully vaccinated, the highest rate of the main four branches, according to data provided by each. And at a rate of 56%, the broader U.S. population has a ways to catch up.

The Navy has taken a more-stick-than-carrot approach with its members, eschewing the free gift cards or cash bonuses that some private employers are offering as incentives and instead making life more difficult for sailors who haven't gotten their shots. It had been imposing long quarantines away from family and restricting port calls for unvaccinated sailors even before the Defense Department's Sept. 15 inoculation mandate was announced.

"A lot of sailors join the Navy because they want to see the world," said Cmdr. Wade Smith of the USS Sioux City. "I told the crew, if you get to 100% vaccinated, you'll have that option."

The Navy's experience could be a useful roadmap for U.S. employers that are facing a delicate balancing act as they seek to ensure a safe return to office while not alienating certain workers by forcing them to get a jab. Some employers have recently imposed vaccine mandates as the delta variant spreads, but others like Amazon can't enact such rules in the current labor market without the risk of losing employees.

Companies don't have the same level of control over employees as officers do sailors on a ship, but they can create inconveniences for their workers' daily lives and limit activities — like in-person trainings and meetings — that could give employees a leg up.

"What can companies learn from this? Incentives work," said Mark Cancian, senior adviser at the Center for Strategic and International Studies and a retired Marine Corps colonel. "Putting out another pamphlet about how vaccination is safe and you should do it is not going to help."

COVID outbreaks at big companies like Amazon — which saw 20,000 of its U.S. workers contract the virus over six months last year — have proven public relations disasters. And the Navy hasn't been immune, either. Nearly 1,300 sailors were infected on the aircraft carrier USS Theodore Roosevelt in March 2020, forcing the crew to evacuate to Guam and sidelining the ship for more than a month.

Officers have clamored to avoid the same fate since the Defense Department began its vaccine rollout in mid-December. If sailors get sick while at sea, operations could be crippled for weeks, an especially costly problem for the Navy, which is the most expensive of the military's branches to operate.

For commanding officers, "not being effective is not an option," said Katherine Kuzminski, director of the Military, Veterans, and Society Program at the Center for a New American Security.

In March, Smith's crew on the USS Sioux City in Mayport, Fla., became the first in the Navy to reach 100% vaccination. Ten ships have rates of 95% or more.

"We tried to tell them all the time about the mission of the ship," he said about convincing crew members to get the shot. "'We're about to deploy, and I only have 70 sailors. I need every one of you.'"

Smith said he first called his crew to the flight deck to emphasize the importance of the COVID vaccines, and the ship's hospital corpsman then set up a table in the mess deck for 30 minutes every day to answer questions from individual sailors. Capt. John Gay, public affairs officer at the Navy Bureau of Medicine and Surgery, said officers across the country engaged each sailor personally about getting vaccinated.

"We have a unique environment that the other services don't have, working in these close quarters," he said. "So there's been a lot of education, and that face-to-face leadership has really helped."

The newly imposed vaccine mandate requires that all military personnel be vaccinated by mid-September, and those who don't comply could face punishments as extreme as removal from service. But before the shots became mandatory, the rollback of restrictions for vaccinated sailors in February convinced many to get the jab. Meanwhile, unvaccinated service members faced restrictions that impacted their personal and professional lives. Even now, those without a shot have to quarantine on the ship for at least two weeks before deployment, which means they're sequestered in close quarters, away from family, before what will likely be a months-long absence at sea.

When docking at a foreign port, which can happen several times per tour, unvaccinated sailors may also be forced to stay on the ship while their vaccinated counterparts enjoy their time off in a new city.

Individual bases have the authority to impose additional rules, too. Mark Julian Martinez, a junior enlisted sailor on the USS Donald Cook, said unvaccinated sailors on the base in Rota, Spain, were prohibited from going anywhere outside the base besides their homes. It was "just another added incentive for people to get the vaccine," he said.

In the corporate world, some companies have found success in encouraging vaccines by making life inconvenient for those without. Forcing masks and routine testing could be a hassle for unvaccinated workers, while not being able to return to the office or attend in-person events could impact those employees' professional lives.

"You can choose to be unvaccinated, but then you also give up opportunities that would be beneficial to your career," Kuzminski said. "At a certain point, that would catch up with you."

Wall Street firms like Morgan Stanley and Citigroup now require their workers to be vaccinated to return to the office, skirting a mandate while still creating a strong incentive for inoculation. Other employers like AbbVie require only their unvaccinated employees to mask up and undergo weekly testing.

The Navy has allowed vaccinated sailors to go unmasked for the majority of its vaccination campaign, though the requirement was reintroduced at many bases for all sailors at the end of July in response to the delta variant.

Jaslyn Henyard, a junior enlisted sailor on the USS Whidbey Island, said that many people on her ship wanted to get the vaccine in order to "go back to normal life."

Gay, the Bureau of Medicine and Surgery public affairs officer, said that if the rest of the country took notes from the Navy, the pandemic might soon be behind us.

"We have to remain really disciplined, and the Navy's done a really good job with that by creating COVID-free bubbles of people," he said. "If we can create that in our communities, I think the end would be near."