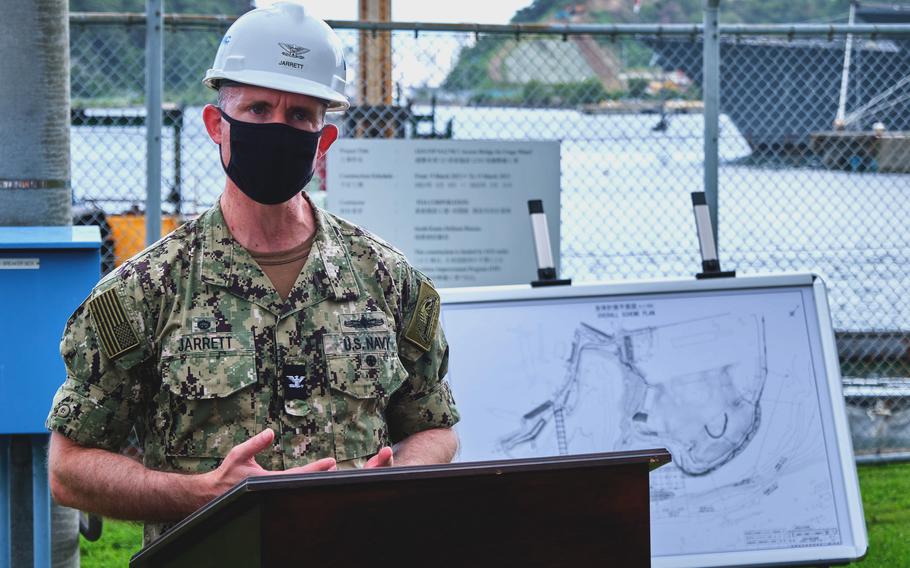 YOKOSUKA, Japan — The Navy and Army Corps of Engineers has begun construction of a $111 million loading dock to drastically reduce the time needed and streamline the process of loading munitions aboard its warships at nearby Yokosuka Naval Base.

When complete, the new combat loading wharf at the Navy’s Urago Storage Area will enable the Navy to load its destroyers and cruisers with munitions faster and despite inclement weather.

The project site, in an industrial area about a mile from base and directly adjacent to the Japanese Maritime Self-Defense Force naval base, is officially called the Urago Wharf. The facility served as a munitions storage area for nearly a century, including for the armed forces of Imperial Japan.

“This combat loading wharf represents a huge step forward in our capability, allowing us to complete all loading requirements pier-side instead of in the middle of Tokyo Bay,” said Lt. Cmdr. Brian Snyder, commanding officer of Naval Munitions Command Pacific East Asia, Detachment Unit Yokosuka. “Right now, nearly 40% of the time we’re not able to go out [and load ships] because of winds or because of the sea’s state. This almost eliminates that factor.”

Naval ships at Yokosuka are typically loaded via barge, and the speed of the process is largely determined by weather and sea conditions, Capt. Rich Jarrett, commander of Yokosuka Naval Base, said during a groundbreaking ceremony Wednesday at the construction site.

Even that day, Jarrett said, high winds meant a ship waiting in the harbor for munitions could not be loaded.

“This combat loading wharf will eliminate that uncertainty and it will give days back to sailors so they can spend time with their families or out at sea conducting their real-world missions rather than waiting for the weather or the wind or any other circumstance that nature brings up on us,” Jarrett said.

The wharf will provide a safer environment for loading munitions, said Randall Baucom, spokesman for the naval base, on Friday.

“At sea, it’s less stable,” he said. “This is safer for the people who are loading and unloading the munitions.”

The project is planned in three phases. The first phase, slated for completion in 2023, consists of an access bridge approximately 340 feet long.

The second phase is the dock itself, which should be finished by 2025. At nearly 740 feet, it could comfortably service the 567-foot Ticonderoga-class cruisers or the 505-foot Arleigh Burke-class destroyers homeported at the naval base.

The third phase, expected to be complete in 2028, is a new road connection for easier access to the dock.

Japan is footing the entire $111 million bill for the project, although it’s a joint venture with the Navy, Corps of Engineers and the U.S. government, according to an email Thursday to Stars and Stripes from Martin Lewis, deputy assistant regional engineer for Navy Region Japan.

Funding comes through the Defense Policy Review Initiative, an agreement between the U.S. and Japan to realign defense forces in the region, according to Baucom.

The same initiative has also funded other U.S. military projects, including the relocation of U.S. Marine Corps troops from Okinawa to Guam and the construction there of the Marines’ Camp Blaz.

Lewis said the naval base has a joint-use agreement for the wharf with the Japan Maritime Self-Defense Force. He said the specifics on its use of the wharf would likely be addressed after it’s built.