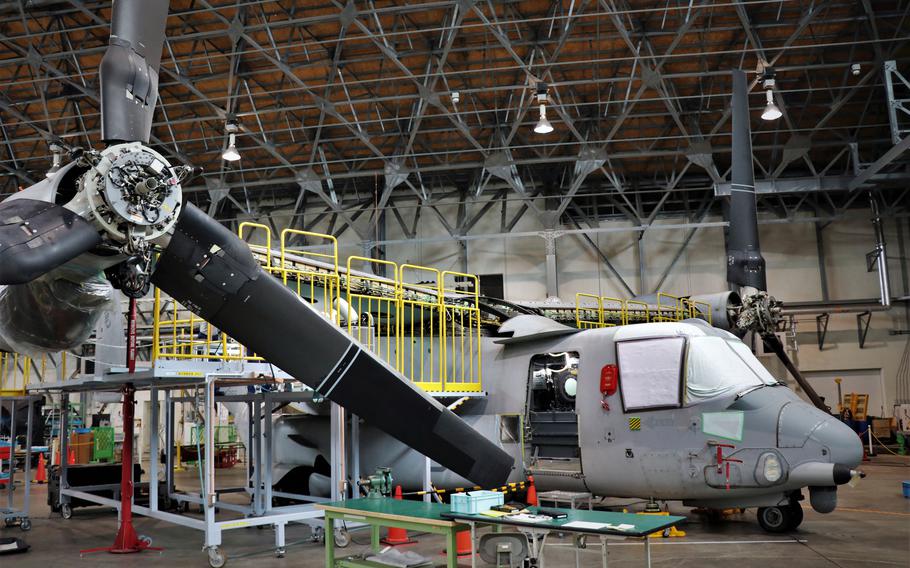 The U.S. military has signed two Japanese firms to maintain its V-22 Osprey tiltrotor aircraft across the Pacific under contracts worth $225 million each.

Under the contracts, NIPPI Corp. and Subaru Corp. will compete for individual, depot-level maintenance orders to “provide the best value to the U.S. Government,” according to a news release Tuesday from Fleet Logistics Center Yokosuka. Depot maintenance involves major repairs, overhauls or complete rebuilding of aircraft systems.

The Yokosuka logistics center partnered with Fleet Readiness Center Western Pacific to let the contracts. The Yokosuka logistics center provides service and support for all U.S. military services in the 7th Fleet’s area of operations. Fleet Readiness provides support for naval aviation units on ships and on land in the Western Pacific and sometimes the Middle East.

The five-year contracts allow four one-year extensions and one six-month extension if terms are met. With all extensions the contracts expire Dec. 31, 2030.

Both firms have proven records with the U.S. military or with Osprey maintenance, Navy Capt. Edward Pidgeon, commander of Fleet Logistics Center Yokosuka, said in the release.

NIPPI has worked alongside the U.S. government since the early 1950s, and in June 2019 contracted with Fleet Readiness Center Western Pacific, based at Naval Air Facility Atsugi, to increase its capacity to maintain F/A-18 Super Hornets fighters, and H-1 Venom/Viper and MH-60R Seahawk helicopters across the region. That contract is worth at least $52 million to NIPPI over a potential seven years.

NIPPI has worked on more than 14,000 aircraft for the U.S. Navy and Marine Corps, according to the release.

Subaru will use its Kisarazu facility to repair the U.S. aircraft, Andrew Grage, spokesman for the fleet readiness center, told Stars and Stripes by email Tuesday.

NIPPI has several facilities in western Japan, including one in Yamato just outside of NAF Atsugi in Kanagawa prefecture.

"Securing two proven aircraft firms like NIPPI and Subaru will be vital to the continuity of V-22 maintenance support in [the Indo-Pacific Command] for years to come," Capt. Edward Pidgeon, commander of Fleet Logistics Center Yokosuka, in the release.