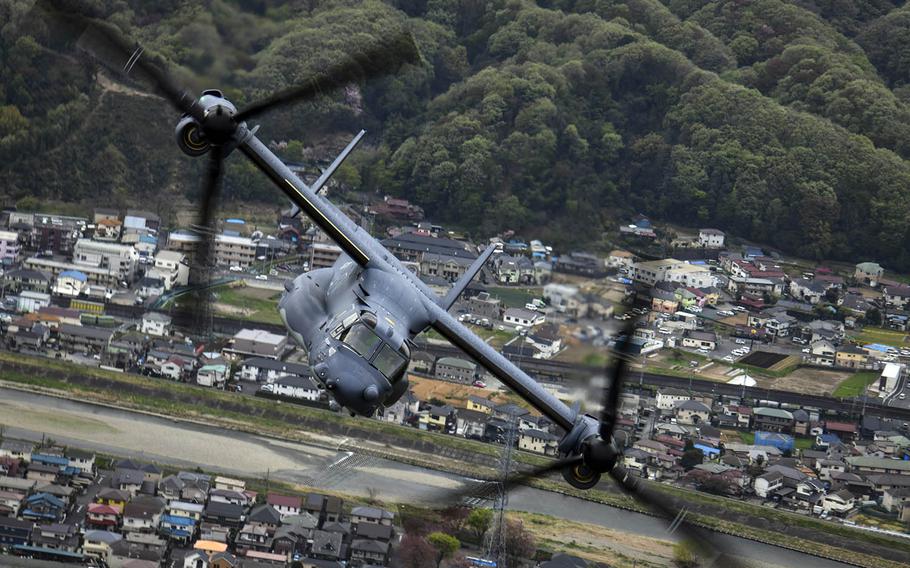 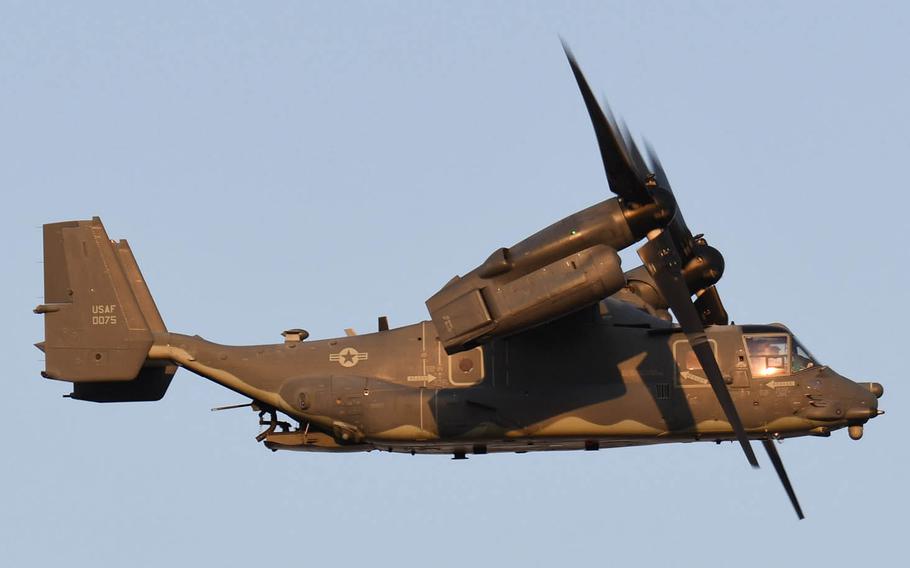 An anti-base group near Yokota Air Base in western Tokyo is complaining that CV-22 Ospreys have been flying over residential areas with their machine guns visible. The Air Force says the guns are only loaded for use over approved training areas. (Hamura Peace Committee)

YOKOTA AIR BASE, Japan — A group of Japanese peace activists is up in arms about Air Force CV-22 Osprey aircraft flying over parts of Tokyo with the barrels of their unloaded machine guns visible.

The Hamura Peace Committee shared its collected observations of flights from Yokota with the Mainchi newspaper, which published the group’s data on May 10. Members of the group told the newspaper they’ve seen the hybrid aircraft with its weaponry visible dozens of times since June 2018.

The tiltrotor CV-22 Ospreys may be armed with one .50-caliber machine gun mounted on the rear ramp, according to an Air Force factsheet. The ramp must be lowered for the weapon to be seen or fired.

Yokota’s Ospreys belong to the 353rd Special Operations Group, headquartered at Kadena Air Base, Okinawa. In an email Thursday to Stars and Stripes, group spokesman 1st Lt. Josh Thompson said an Osprey’s machine gun is kept stowed and unloaded during flight and is only loaded for use over approved training areas.

“This is the standard configuration for flight,” he said. “We attempt to minimize impacts on our local community while ensuring we maintain expert proficiency of flying operations.”

Flight with the machine gun visible is a standard configuration, Thompson said, adding that aircrew and community safety are top priorities.

“We attempt to minimize impacts on our local community while ensuring we maintain expert proficiency of flying operations,” he said.

Kazutada Furuta, secretary general of Nishitama Group, which campaigns for closing the air base, said the sight of openly armed aircraft flying low and regularly over parts of the city is appalling to his group’s members.

However, he said they don’t believe the crews would actually fire the weapons.

The Hamura Peace Committee, which is in a city adjacent to the air base, has complained about armed Ospreys before.

And in March, an unrelated but similar incident prompted the 1st Marine Air Wing to delete a tweet with a photograph of a CH-53 Super Stallion helicopter in flight over Okinawa.

Complaints from peace activists on the island followed local media reports about the photograph, which included the sun setting over a .50-caliber machine gun barrel.

Marine Maj. Ken Kunze, a wing spokesman, at the time said the photograph drew many positive comments on Twitter but also many negative ones. He said he took the tweet down, not because he believed it was inappropriate, but because he could not respond to all the remarks.

“The weapon in the lower left of the photo that is pointing away from any populated area below was locked in the up position for travel and no Marine was manning it when the photo was taken,” he wrote by email to Stars and Stripes at the time.