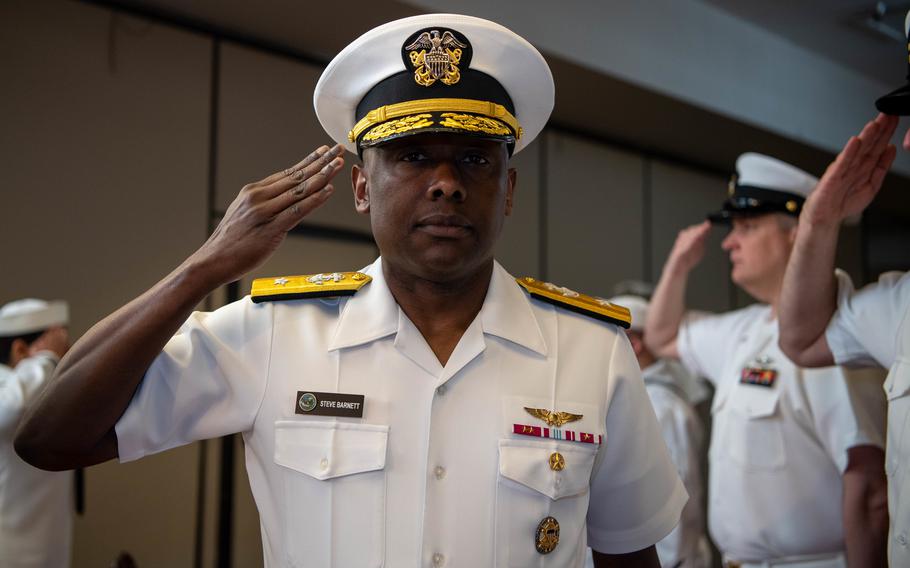 Rear Adm. Stephen Barnett renders a salute as he walks through sideboys during a change of command ceremony at Naval Base Kitsap-Bangor June 18, 2021. (Victoria Foley/U.S. Navy)

SAN DIEGO, Calif. (Tribune News Service) — The San Diego-based Navy command in charge of the service’s bases across California and Nevada is changing hands, as one Navy admiral heads into retirement and another takes the reins in a role sometimes described as the “Navy Mayor” of San Diego.

Rear Adm. Stephen Barnett will assume command of Navy Region Southwest at a ceremony Friday at Naval Air Station North Island, the Navy said in a statement. He most recently served as the commander of Navy Region Northwest in Kitsap, Wash. and was the commanding officer of Naval Base Coronado from 2015 to 2016.

Barnett is the third Black officer to serve as San Diego’s unofficial “Navy Mayor” and the first to do so as commander of Navy Region Southwest, which was established in 1999. Rear Adm. Benjamin Hacker held the title as the commander of Naval Base San Diego in the late 1980s. Rear Adm. Samuel Gravely, Jr. — the first Black man in the Navy to achieve the rank of flag officer — held the title from 1975 to 1976, when the command was known as the Eleventh Naval District.

Barnett served as a naval flight officer on P-3 Orions, the Navy’s land-based anti-submarine and surveillance aircraft. He’s served as commanding officer of one P-3 squadron and has since worked as an analyst for the Navy at the Pentagon and as the executive assistant to the Vice Chief of Naval Operations, according to his Navy biography.

Barnett is taking over for Rear Adm. Bette Bolivar, who is retiring after more than 40 years of service.

During her Navy career, Bolivar, a 1985 graduate of the U.S. Naval Academy, served as a Navy diver and salvage ship commander. Since taking command in San Diego in 2019, Bolivar found herself at the crossroads of military service and politics when she was named the convening authority overseeing the war crimes court-martial of Navy SEAL Chief Eddie Gallagher.

Gallagher was accused of killing a wounded teenage ISIS fighter and shooting civilians during a 2017 deployment to Mosul, Iraq, by several of his fellow SEALs. At trial, Gallagher was found not guilty of the most serious charges against him.

The Navy’s handling of Gallagher became pain points for the service as Republican politicians, including then- San Diego Congressman Duncan Hunter, questioned whether the SEAL should be charged with any crime. Then-President Donald Trump, as the commander-in-chief of the armed forces, stepped in several times on Gallagher’s behalf, including ordering the Navy to release the SEAL from the brig before his trial.

Bolivar also led the region’s 10 Navy bases through restrictions brought on by the coronavirus pandemic.

The admiral’s career was not without controversy. Bolivar, like hundreds of Navy officers of her generation, was embroiled in the Fat Leonard scandal, the Union-Tribune first reported in 2019.

In 1998, as the commanding officer of the salvage ship Salvor, Bolivar — who held the rank of lieutenant commander at the time — accepted a hotel room, dinner, drinks, entertainment and a golf outing in Malaysia by Leonard Glenn “Fat Leonard” Francis, according to Navy records. The Navy addressed Bolivar’s alleged misconduct through “administrative action” and otherwise deemed her a “significant contributor and valued Navy leader,” according to a 2017 memo from Adm. Philip Davidson, who was leading the Navy’s “Fat Leonard” investigation at the time.

Bolivar is one of hundreds of naval officers investigated by the Navy for connections to Francis, who was arrested in San Diego in 2013 for defrauding the Navy out of at least $34 million in ship husbanding fees in the Western Pacific and Indian Oceans.

Although he pleaded guilty, Francis has not been sentenced in the case.