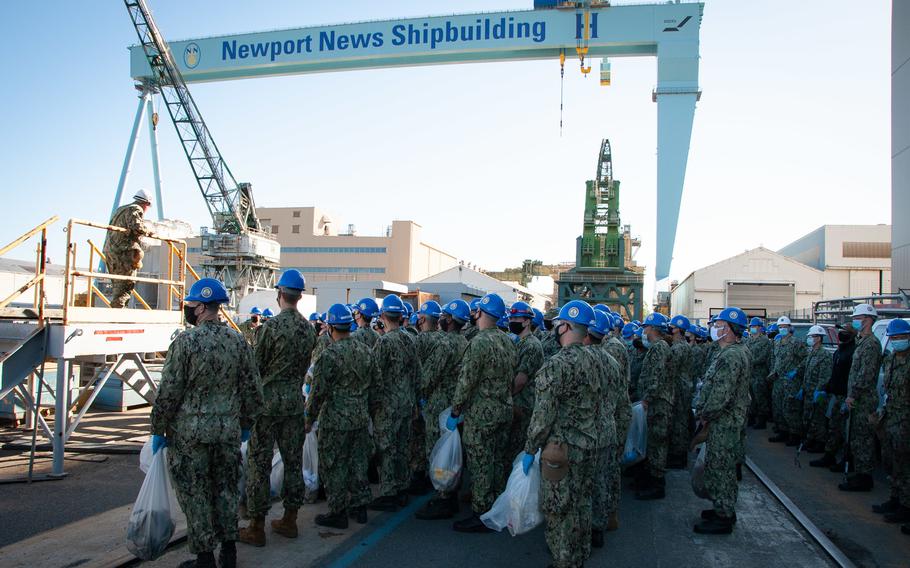 NEWPORT NEWS, Va. (Tribune News Service) — The little hut is built and in line for Newport News Shipbuilding’s giant gantry crane to swing it onboard the USS John C. Stennis.

Once on the dry-docked carrier’s hangar deck, it will become the Look Ahead Café, open to sailors and shipyard workers in need of a coffee break during the carrier’s four-year refueling and overhaul.

Sailors and shipyard employees will work side by side with sailors who handle about a third of the massive task — and Capt. Cassidy Norman sees the Look Ahead that he ordered as one way to help reach his goal for the refueling.

“I want to be sure this is a place where people want to come to work,” he said.

It’s why, for instance, the Stennis crew is working on keeping what’s really a busy industrial workplace as clean as possible.

A few days before tugs edged the 103,000-ton ship into dry dock, with just 18 inches to spare on either side, Stennis sailors showed up at the yard for a version of a “FOD.”

That is, the same kind of shoulder-by-shoulder “Foreign Object Debris” walkdown they do on a flight deck, to make sure there’s nothing that could be sucked into a jet engine — except this FOD was in the dry dock.

The crew did the cleanup without anyone from the yard asking, with the same aim of ensuring shipyard workers feel welcome. Stennis sailors have been working hard to speed up work on the refueling.

One, Petty Officer First Class Victoria Nelson, came up with a database that can tap into a range of other databases to serve at the heart of a system to manage the complex flow of sailors’ work, and make sure they don’t get in one another’s way.

Dealing with corrosion — after 25 years on salt water, that’s a major concern — is a part of the Stennis crew’s work, and it involves more than chipping rust.

Usually, keeping after corrosion is a chore divided among the carrier’s 20 departments, each made responsible for a share of the ships 2,700-odd spaces. But some corrosion is tougher to tackle than sanding down a rust spot — some can’t even be seen.

So Norman and the Stennis leadership team set up a floating corrosion specialist team, trained in the nondestructive testing that can find invisible corrosion and the many repairs, from chemical treatment to changing the way two different metals are fastened together, to fix the problem.

“They’re climbing up the mast, they’re crawling down under the weapons elevators and coffer dams, down in those dark closed spaces down in the hull — the tanks,” Norman said.

“They’re designed to provide access, but they aren’t comfortable.”

The corrosion team’s work means the refueling and overhaul won’t be slowed to wait for a specialist crew from outside the ship or the yard to arrive, he said.

The Stennis’ unique in-house team of riggers, trained in the art of arranging hoists and cranes to safely move heavy machinery, helped speed the work of removing un-needed gear before the Stennis came over to the shipyard a month ago.

And they’re staying busy now that the ship is in dry dock, helping the shipyard’s own riggers move heavy, awkward items on and off the ship.

Sailors and shipyard workers are continuing the traditional, side-by-side once-a-week walk-throughs of every compartment of a carrier undergoing a refueling and overhaul, looking for safety issues.

But Norman pushed for ship’s force and shipyard safety experts to team up to issue combined safety bulletins, instead of the separate reports of refuelings past.

Norman thinks the new combined report will have a bigger impact than the old, separate ones.

“This is a big industrial jungle; lots of loud noises, lots of heavy things moving around ... we want to make sure everyone is keeping safe,” he said.

And while being in such a workplace isn’t the dream job of every sailor who signed up to sail the seas, being in Newport News is a chance for the crew to take time to study for qualifications, promotion or college degrees, and many are seizing the chance, he said.

“We’re back at the place that built the Stennis,” Norman said. “It’s a homecoming.”