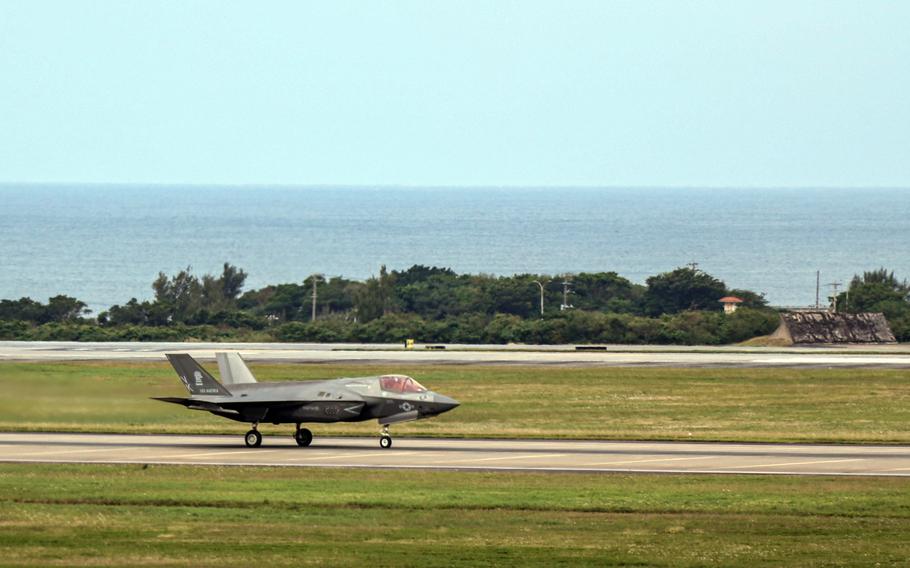 Kadena Air Base is home to the Air Force’s 18th Wing.

While the fifth-generation fighter was being towed on the flight line, the front landing gear malfunctioned and the aircraft’s nose dropped onto the ground, Martins said. He said the incident caused no injuries. Video from Japanese public broadcaster NHK shared Thursday on Twitter showed the F-35 stopped on a taxiway with its nose gear collapsed.

“The pilot performed as trained and chose the safest option, landing the aircraft safely in accordance with standard procedures,” Martins said in the statement. “Operating our aircraft safely and effectively is a top priority and our aviators take great precautions to ensure the safety of the aircrew and the surrounding areas.”

The fighter was conducting “standard training operations” in local ranges at the time of the incident, Martins said in a follow-up email to Stars and Stripes. After the aircraft landed, it was surrounded by fire engines and emergency vehicles, NHK reported Thursday afternoon.

It is unclear how much damage was done to the fighter, Martins said in his email. He said a “detailed investigation” will be conducted.

“The mishap class will be determined by the investigation,” Martins wrote in the email.

The military defines mishaps by class from A to D. Class A mishaps involve repair costs exceeding $2 million or the death or permanent disability of a service member. A Class D mishap involves $25,000 to $59,999 in property damage and injuries ranging requiring first aid up to missing a day from work.

The Marine Corps has had three Class A mishaps in manned aircraft in 2022, according to data on the Naval Safety Command’s website.

A spokesman for the Okinawa Defense Bureau, a branch of the Japanese Ministry of Defense, said Thursday evening it is aware “the nose of an F35 touched the ground” but is awaiting details.

A spokesman for Okinawa prefecture’s Military Base Affairs Division said it was waiting for information from the defense bureau. Gov. Denny Tamaki had not yet made a public comment on the incident.

The short-takeoff, vertical-landing fighter has been plagued by high costs and technical issues since its inception.

The pilot of an F-35A Lightning II, the Air Force variant, survived a crash at Hill Air Force Base, Utah on Oct. 19. A replacement F-35A costs about $75 million, Reuters reported in July.