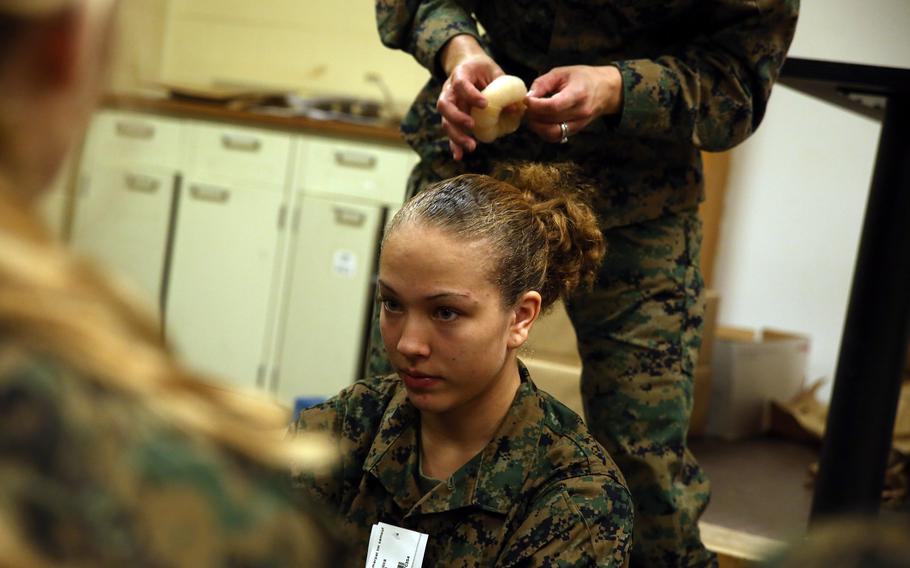 Female Marines may sport one unsecured half ponytail or up to two unsecured half braids, according to the new regulations. Women with short hair may wear it in twists. (Caitlin Brink/U.S. Marine Corps)

The Corps joined its sister services to permit its female members to wear something other than short hair or an austere bun while in uniform, according to uniform board updates that took effect Wednesday.

“These changes are indicative of our disciplined approach to uniformity without sacrificing the health and safety of our female Marines,” Marine Corps spokesperson Maj. Jim Stenger said in a press release Wednesday. “We are grateful for the continued feedback from our Marines in addressing uniform updates and modifications. It’s because of conversations like those that our leadership can make positive change.” 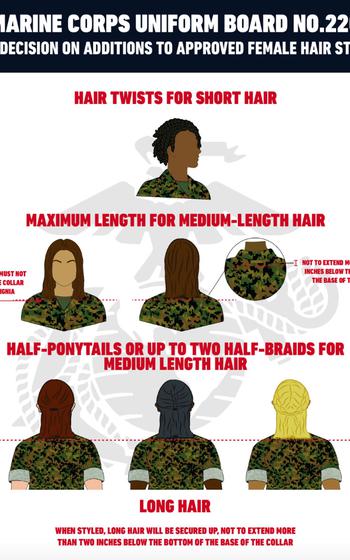 The Marine Corps joined its sister services to permit its female members to wear something other than short hair or an austere bun while in uniform. (U.S. Marine Corps)

All hairstyles must present a “neat and professional” military appearance. The Marines have no requirement for women to wear their hair tightly pulled back or slicked back at any length.

"I've shot in the burn before during fire drills and I used to get in trouble because I would take my hair down so I could kneel down and shoot," Brooks, of Combat Logistics Regiment 3 at Camp Foster, Okinawa, told Stars and Stripes on Monday.

A tight hair bun for female Marines is a safety concern and interferes with their marksmanship in the kneeling and prone position, Brooks said. The bun will push a Marine’s helmet forward, obstructing her ability to align the target with the rifle sights.

The Navy in 2018 was first to permit women to wear ponytails in uniform. The Air Force followed suit in 2021 by allowing female airmen to wear their ponytails below their uniform collars. The Army allowed ponytails in May that year, leaving the Marines lagging behind.

“Females might push the envelope absolutely,” she said, “but I think overall [what] the Marine Corps is progressing to is more of a safety concern because the Marine Corps has heard our voice and our complaints, and this was a safety issue.”