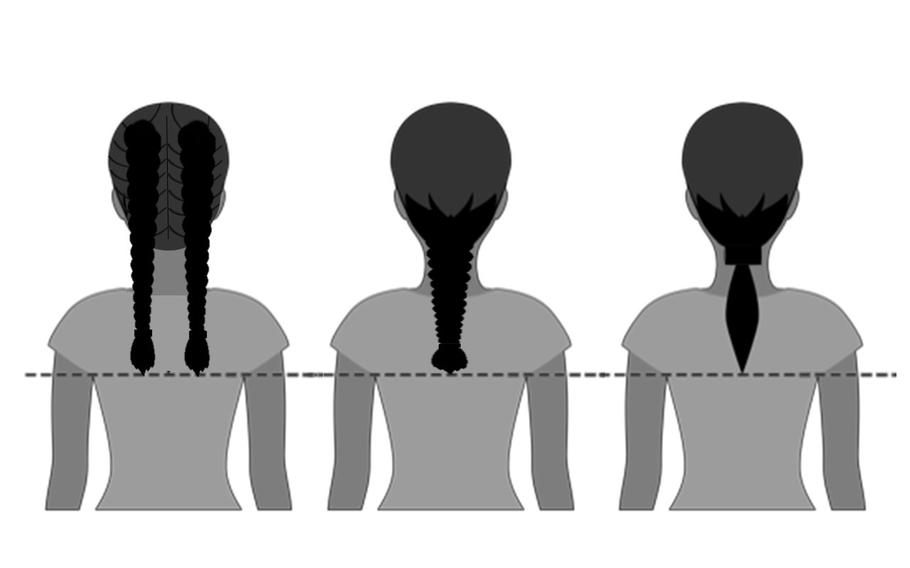 Beginning in February, female airmen can wear their hair in up to two braids or a single ponytail with bulk not exceeding the width of the head and length not extending below a horizontal line running between the top of each sleeve inseam at the under arm through the shoulder blades. In addition, women’s bangs may now touch their eyebrows, but not cover their eyes. (Corey Parrish/Air Force graphic)

Women in the Air Force can wear a ponytail or up to two braids with their uniform under an update to grooming regulations spurred by feedback that showed women experienced hair loss and migraines from the current standards.

The changes take effect next month and are part of the Air Force’s efforts to address diversity and inclusion in the ranks, according to an Air Force news release sent Thursday.

“As I outlined in ‘Action Order A: Airmen,’ this decision is a commitment to supporting the airmen we need and sustaining the culture and environment of excellence that will continue to make the Air Force an attractive career choice for airmen and families,” Air Force Chief of Staff Gen. Charles Brown, said in a statement. “I’m thankful for the feedback and research conducted from a number of women leaders, the Women’s Initiative Team, the Air Force uniform board, and our joint teammates.”

He approved the policy after considering feedback from the force, a uniform board recommendation, and the professional image and standards of the Air Force and military, according to the release.

The change allows women to wear up to two braids or a single ponytail so long as the width does not exceed beyond their head and the length does not extend below the top of each sleeve inseam, according to the release. In addition, women’s bangs may now touch their eyebrows, but not cover their eyes.

These new changes will be effective upon publication of the new standards in Air Force Instruction 36-2903 in February and will also apply to women in Space Force.

Under previous guidance, if a woman’s hair or ponytail was longer than her collar, it had to be secured with no loose ends.

The Air Force uniform board convened in November to discuss ideas gathered from airmen across the service who participated in a dress and appearance crowdsourcing campaign. Participants on the board included 19 diverse airmen of various ranks from across the major commands and headquarters directorates.

Thousands of women across the Air Force provided feedback to the Women’s Initiative Team, which sent recommendations to the board. Women said constraints of current hair-grooming standards resulted in damage to their hair, migraines and hair loss.

“In addition to the health concerns we have for our airmen, not all women have the same hair type, and our hair standards should reflect our diverse force,” said Chief Master Sgt. of the Air Force JoAnne S. Bass. “I am pleased we could make this important change for our women service members.”

The changes also support ongoing efforts to address diversity and inclusion in the ranks, according to the release.

“We remain committed to removing barriers to service,” said Lt. Gen. Brian Kelly, Air Force deputy chief of staff for manpower, personnel and services. “In an all-volunteer force, we want fully qualified volunteers who are representative of the nation to see us as a great opportunity to maximize their talent and serve.”

The board also considered beard regulations for men, according to the release. However, the board found no known health or hair loss issues associated with current male grooming standard compliance and did not make changes. Beards are permitted in conjunction with medical exceptions such as shaving waivers or for approved religious accommodations.

Several other ideas from the board remain under consideration.

The Army is conducting a similar review of its grooming standards and is expected to announce changes by the end of January.