Navy to allow ponytails, dreadlocks and other hairstyles for female sailors 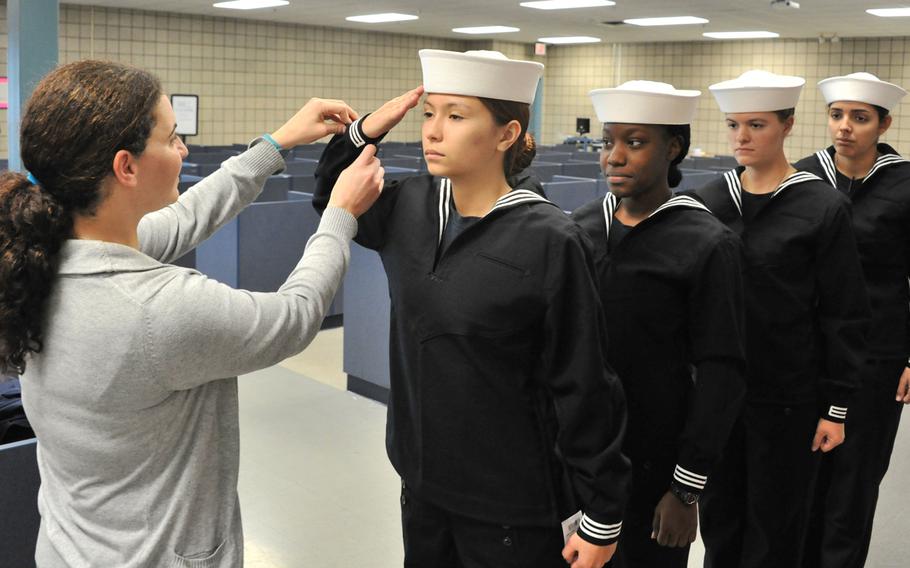 Female Navy recruits are fitted by Navy Exchange Uniform Issue employees at Recruit Training Command. Women in the Navy will soon have more hairstyle options while in uniform, according to an announcement about upcoming changes to female grooming standards. (Seth Schaeffer/U.S. Navy photo)

Women in the Navy will soon have more hairstyle options while in uniform, according to an announcement Wednesday about upcoming changes to female grooming standards.

Female sailors will soon be able to wear ponytails and dreadlocks – also known as “locks” — while working or in dress uniforms. Women who choose to wear buns will be allowed to style the bun as wide as the back of their heads, according to the Navy.

Further, women in dinner dress uniform will soon be authorized to let their hair down below the collar of their shirt or jacket.

There are some limitations to wearing ponytails. If the hairstyle presents an occupational hazard or safety concern, female sailors will need to pull their hair back into a bun, according to the Navy. Previously, ponytails were only allowed during physical training.

The changes were announced during a live online broadcast Wednesday with Adm. John Richardson, Chief of Naval Operations, and Chief of Naval Personnel Adm. Robert Burke.

Richardson highlighted a team of six female sailors who worked to devise the new standards, which the admiral said was evidence that sailor-borne suggestions can come to fruition.

The last major hairstyle regulation announcement for female sailors came in 2014, when changes were made to allow more hairstyles for women of color. That’s when two-strand twists and multiple braids were authorized, as long and they hung freely above the collar and covered the whole head.

Those changes were made after legislators criticized earlier hair regulations for all services that they said unfairly targeted black women.

The Air Force and Army also allowed more traditionally black hairstyles – such as two-strand twists and braids – in 2014, followed by the Marines in 2015. The Marines and Army authorized locks in 2015 and 2017, respectively.

Richardson said the upcoming changes are happening to build a more inclusive force.

“All of this really is again to allow us one to be an inclusive team that is focused on being more lethal to our competitors, more lethal towards our rivals, our enemies and much more inclusive inside our team,” Richardson said in the broadcast.

Women should continue to go by the Navy’s current grooming standards until the new regulations are put into place. Further details on the new standards and a timeline of their implementation will come later in an official, written announcement from the Navy Personnel Command, according to the broadcast.