210 Freeway overpass dedicated to Dylan Merola, a US Marine killed in Afghanistan 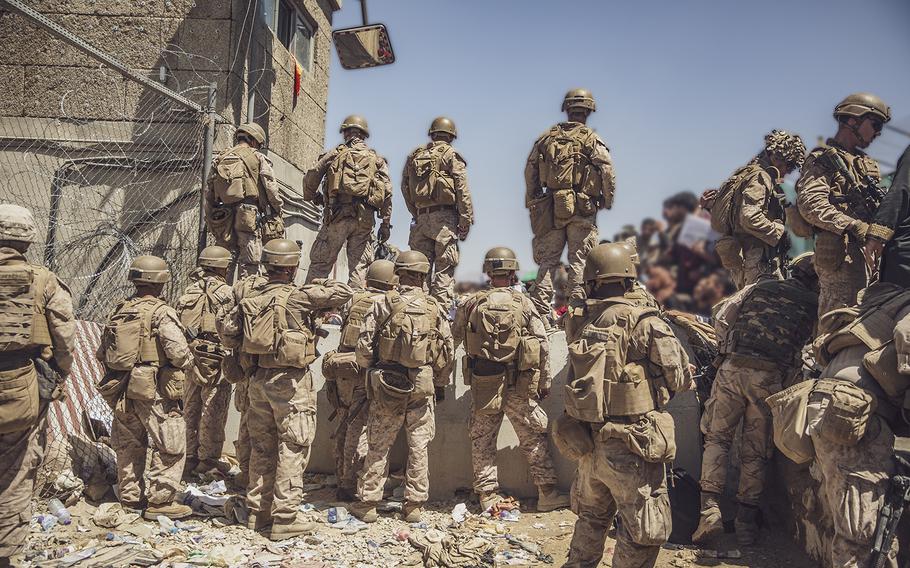 U.S. Marines assist with security at an Evacuation Control Checkpoint at Hamid Karzai International Airport in Kabul, Afghanistan, on Aug. 26, 2021, the day 13 U.S. servicemembers were killed in a suicide bombing at the airport. Lance Cpl. Dylan Merola one of those killed was honored on Friday, Oct. 28, 2022, in a dedication ceremony in which a freeway overpass was named after him. (Victor Mancilla/U.S. Marine Corps)

Lance Cpl. Merola died Aug. 26, 2021, in a suicide bombing at Hamid Karzai International Airport in Kabul, Afghanistan, as the city was evacuated after the country fell to the Taliban.

He was on his first deployment in Jordan and was set to come home to the states before he was rerouted to Afghanistan to assist in the evacuation efforts. Merola was holding security through the Abbey Gate, when a suicide bomber detonated his vest, according to Merola’s mother, Cheryl Rex.

Throughout the ceremony Friday morning, several speakers shared their own experiences and memories of Merola. Rex shared her pride in her son and her hope that people would continue to remember his sacrifice and his story.

“Dylan, I made a promise to you that I would continue to tell your story and show people how amazing you are for all you have to offer, mostly giving your life for others to live,” Rex said at the ceremony. Merola was a 2019 graduate of Los Osos High School and an avid member of the theater program there. He was born in Upland and spent most of his life in Rancho Cucamonga. He was stationed in Camp Pendleton with the 2nd Battalion.

He was awarded the Purple Heart posthumously, along with the 12 other U.S. service members who lost their lives in Afghanistan.

Legislation to rename the overpass in Merola’s memory was introduced by Assemblymember James Ramos on Feb. 15 and passed Aug. 19, according to the California Legislative Information website.

“I worked side by side with the family from the beginning,” Ramos said. “Early on the in the year I reached out to them, we had a Zoom conversation and I asked their permission to carry forward the piece of legislation that would dedicate the Haven overpass. And they gave me their blessing to move forward.”

The overpass was chosen for the proximity to the family, and it will join Merola’s Gold Star banner located on Lemon and Haven as a permanent tribute to the Marine’s memory.

“I never liked the word bittersweet because it comes up a lot in conversations with people who approach me,” said Rex. “But it is pretty much a bittersweet moment. You want to honor and remember the sacrifices that our kids, our families, our military, everybody who serves for us for our freedom. I hope that Dylan’s story is remembered and known for saving as many lives as he could.”

The signage for the renamed overpass will be funded through donations from veterans’ groups including the Marine Corps League.

“Assemblymember Ramos reached out to us months ago asking for our support in getting the Assembly bill passed, the resolution passed, and helping to raise funding for the signage, which we are proud to do,” said Jeff Breiten, a Redlands veteran and past commandant of the Redlands Detachment of the Marine Corps League. “Lance Corporal Dylan Merola made the ultimate sacrifice for our country. The only thing we can do is help to keep his memory alive and by putting that signage up we are working towards that.”

The league is working to gain the funding needed for the signage, through fundraisers and donations.

“He was a Marine and we are Marines and we do everything we can to help the family,” said Breiten. “That is part of the mission of the Marine Corps family, to provide support for not only Marines and corpsman but the widows, orphans, and parents of fallen Marines.”

Rex said her family members struggle to cope day to day, but she hopes the permanent dedication will remind people of her son’s story and the story shared by so many other Marines.

“Dylan took pride in his efforts to get as many people to safety as possible,” she said. “He would stand up and do this all over again just to save one more person.”