FOLSOM, Calif. (Tribune News Service) — Marine Sgt. Tyler Vargas-Andrews came home to Folsom in time for Independence Day, and thousands of people were there to welcome him.

He returned home from Walter Reed National Medical Center in Maryland, where he was learning to live as a double amputee after a suicide attack outside the Kabul airport left him severely injured. That August 2021 attack killed 13 U.S. military service members assigned to a humanitarian mission and at least 170 Afghan civilians, marking the chaotic end to America’s long war in Afghanistan.

At a ceremony at the Folsom Pro Rodeo on Sunday evening, the community welcomed Vargas-Andrews home and honored other fallen troops. 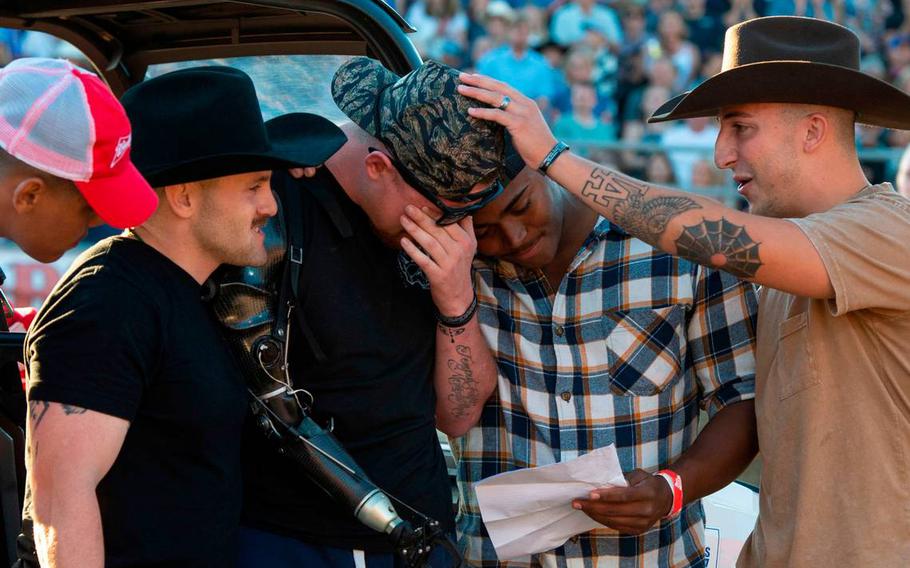 U.S. Marine Sergeant Tyler Vargas-Andrew, center, is consoled by fellow Marines Daulton Hannigan, Caden Cooper and Jorge Mayo, who served in his unit in Kabul, as he’s moved to tears during a ceremony at the Folsom Pro Rodeo on Sunday, July 3, 2022. (Lezlie Sterling, The Sacramento Bee/TNS)

Vargas-Andrews in remarks to the crowd turned the attention to military service members who did not come home from the Kabul mission.

“I’m not the first person to get blown up,” Vargas-Andrews said. “Those 13 weren’t the first 13 to get killed — there have been hundreds of thousands. It’s very easy for attention to be brought and the support of communities to be strong at the beginning but it dies off very quickly. Those 13 families and the friends of those 13, they’re never going to forget it, and hopefully, the rest of us won’t either.”

One of the 13 was Sgt. Nicole Gee, 23, who grew up in nearby Roseville. Gee’s sister joined the ceremony on Sunday evening to honor her and the others lost.

Of the 18 Marines wounded at the Kabul airport, Vargas-Andrews was the most critically injured, losing his left leg at the hip and his right arm above the elbow.

He said his surgeons had told him his physical fitness that helped him survive the blast.

“I think this whole situation is probably my mom’s biggest ‘I told you so,’ moment in regards to me enlisting in the Marine Corps, but she’s too nice to say it,” Vargas said. “For those friends and family of mine who thought I was a maniac for the way I worked out over the years, this is my ‘I told you so’ moment.’” 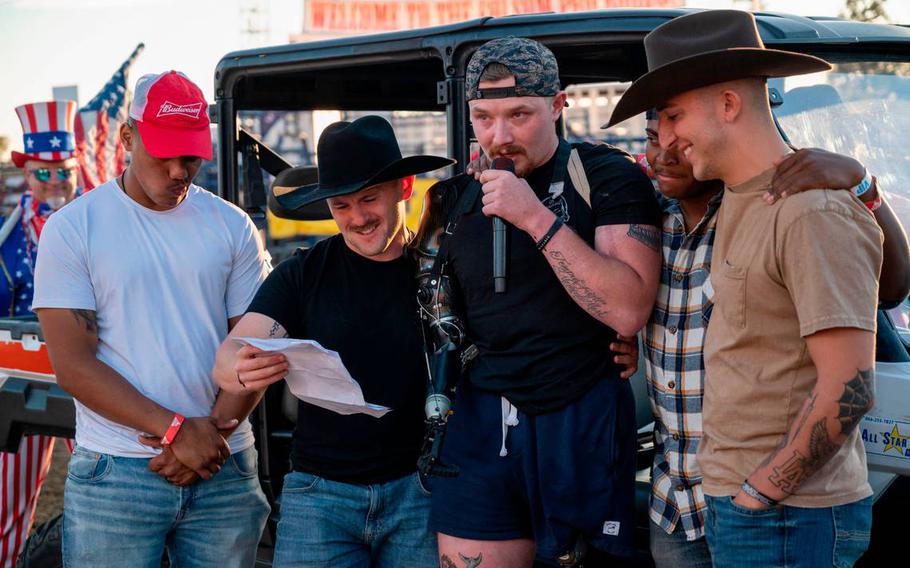 U.S. Marine Sgt. Tyler Vargas-Andrew, center, is joined by some of his Marine Corps brothers in arms, Christian Ritter, Daulton Hannigan, Caden Cooper and Jorge Mayo, as he addresses the crowd at the Folsom Pro Rodeo on Sunday, july 3, 2022. Hannigan, Cooper and Mayo served in his unit in Kabul. The ceremony honored the 13 U.S. service members killed and 18 Marines that were seriously wounded at the Kabul airport bombing in Afghanistan, including Vargas-Andrews. (Lezlie Sterling, The Sacramento Bee/TNS)

Vargas-Andrews graduated from Folsom High School in 2016 and joined the Marine Corps the following year. In Kabul, he contributed to humanitarian efforts to reunite Afghan children with their families.

When Vargas-Andrews landed at Sacramento International Airport on Friday night, he was met by supporters and escorted home to Folsom by a police motorcade. Vargas-Andrews described the support from the community he received upon his return as “unbelievable.”

“We moved to Folsom as a family in 2013 and I never knew the community we had until this,” his mother, Tiffany Andrews, said at a news conference on Sunday. “I’m so happy to call this my home after everything.”

Throughout his recovery Vargas-Andrews said the 13 troops who lost their lives in Kabul motivated him to push forward.

“Most people on the outside looking in think that what I’m doing, what I’ve done so far in recovery, is incredible and amazing,” Vargas-Andrews said in a speech at the rodeo on Sunday. “I’m not a hero. This is something I have to do for myself and my family, for those 13 real heroes who are not standing here in my place.”