‘I won’t ever be able to thank everyone enough’: California Marine injured in Kabul speaks out 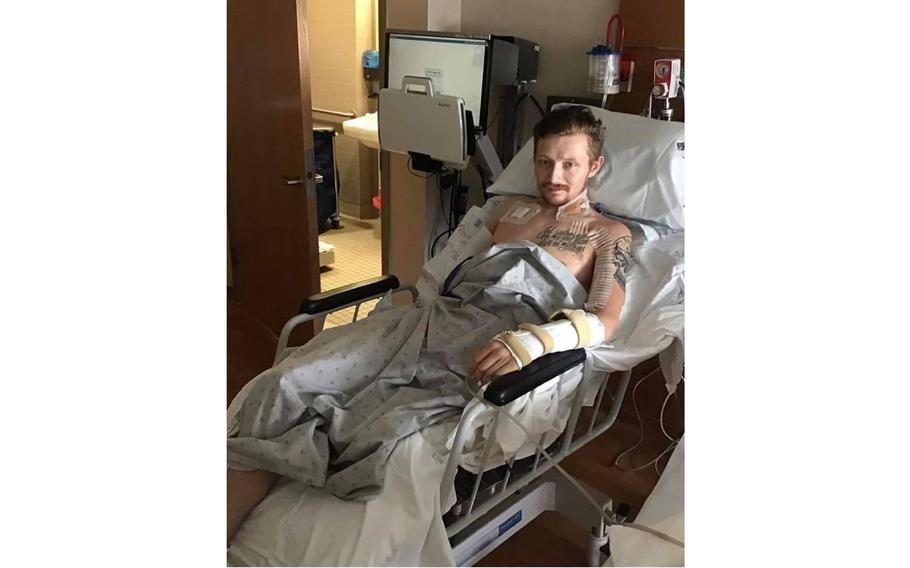 Sgt. Tyler Andrews, the Folsom, Calif., native and Marine who was injured in a suicide bomber attack in Afghanistan, spoke out for the first time on social media. (Facebook)

(Tribune News Service) — Sgt. Tyler Andrews, the Folsom, Calif., native and Marine who was injured in a suicide bomber attack in Afghanistan, spoke out for the first time on social media.

"Let me start by saying that these past almost 2 months have indeed been hard," he said in a social media post. "I have been trying to figure out what I want to say and how to say it. The outpouring of support from friends, family, organizations, and even just complete strangers has been unreal. I won't ever be able to thank everyone enough, but still, thank you."

After two months of treatment, Andrews was moved out of ICU in stable condition on Oct. 14.

"I hate the way I look right now and I'm working mentally on coming to terms with loss of my right arm and my left leg," Andrews said. His statement was accompanied by a photo of him sitting up in a hospital bed.

"Every day I am working toward my recovery," he added. "Some days are better than others, but you best believe I will still strive to be the best version of myself regardless of these injuries. I just have new challenges now and physically am a different person, but I'll see how far I can go with this new body haha. Thank you again to everyone, you have my love and my family's."

Andrews was among 18 American service members who survived the bombing as they were working to evacuate Afghan refugees and Americans. Of those injured, Andrews suffered the most catastrophic injuries, Warfighter Overwatch said at the time.

Following the attack, Andrews was transported to Germany for medical treatment. His mother, Tiffany Andrews, an attorney in Folsom, joined her son there and has been at his side every step of the way, Warfighter Overwatch said.

Andrews was transferred to Walter Reed National Military Medical Center in Bethesda, Md., earlier this month after his injuries stabilized.

The Folsom community has rallied around Andrews and his family, providing meals, raising money and tying yellow ribbons around the city.

A GoFundMe fundraiser seeking to raise money for Andrews' long-term care had raised over $350,000 as of Wednesday. Warfighter Overwatch is collecting donations on their website for Andrews, his mother and his two younger siblings. Donations are also being accepted by First Northern Bank in Roseville.