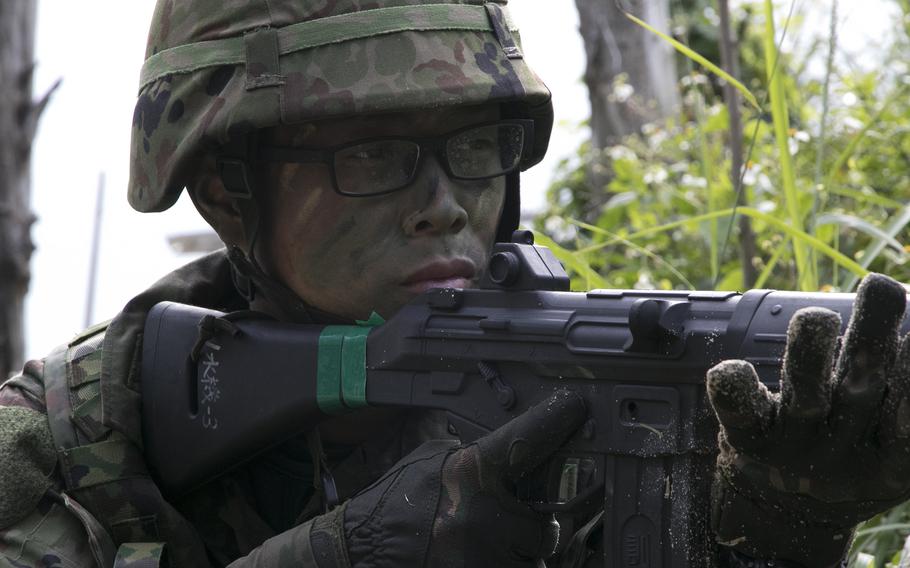 A member of the Japan’s Amphibious Rapid Deployment Brigade raids a beach alongside U.S. Marines during an exercise in Kin, Okinawa, Feb. 9, 2020.  (Matthew M. Burke/Stars and Stripes)

The U.S. Marines and their counterparts in the Japan Ground Self-Defense Force added airstrike practice by the Marines’ most advanced weapons system to their three-week exercise southwest of Tokyo.

Approximately 600 Marines from the 31st Marine Expeditionary Unit on Okinawa and about 400 members of Japan’s Amphibious Rapid Deployment Brigade started training together March 4. The exercise, called Maritime Defense Exercise-Amphibious Rapid Deployment Brigade, ends Friday at a sprawling military training complex for Japanese and American troops at the base of Mount Fuji.

In one scenario, Japanese troops relayed targeting information to an F-35 that made a simulated attack on an area designated as an enemy-held island, the spokesman said. The aircraft did not actually fire any of its weapons’ systems.

The exercises demonstrate the Marines’ doctrine for seizing and holding islands within range of enemy missiles, also called expeditionary advanced base operations. They also show the allied forces’ ability to work together using each other’s methods and equipment, a concept the military refers to as interoperability.

The Marines and Self-Defense Force say the exercise is not meant as a response to any particular threat. But the Pentagon refers to China as its “pacing challenge” in the Indo-Pacific region, a phrase echoed in the halls of Congress.

“This training is nothing to do with a particular country or a region,” the Self-Defense spokesman said. The purpose of the training is to “strengthen the cooperation between Japan and the U.S. and to improve response capabilities.”

It’s customary in Japan for some government official to speak to the media on condition of anonymity.

However, experts believe such exercises are meant as a message for China, which aims to eventually reunify Taiwan with the mainland. Chinese President Xi Jinping believes he has to bring Taiwan under Chinese control to “solidify his status” as ruler, said Toshiyuki Shikata, a former lieutenant general in the Japan Ground Self-Defense Force.

“The joint training is a deterrent, for sure,” Shikata told Stars and Stripes by phone Thursday.

A Chinese attack on Okinawa’s main island is unlikely; however, attacking or seizing one of the smaller islands that make up the southern island chain is not out of the realm of possibility, he said.

“Japan and the U.S. are conducting this kind of training to show China that they have no chance,” he said. “The F-35 is the best fighter jet in the world and China doesn’t have aircraft to match that.”