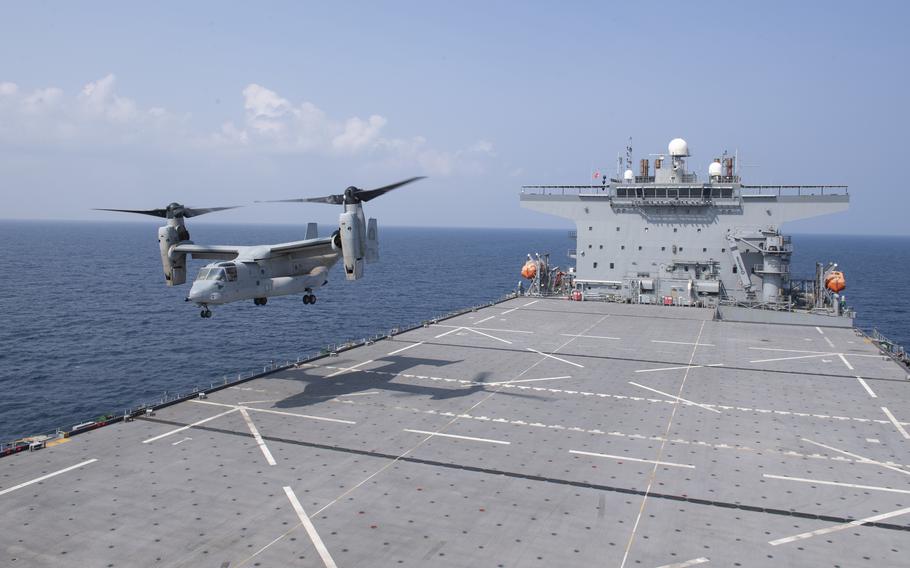 An Osprey assigned to Marine Medium Tiltrotor Squadron 161 lifts off from the Expeditionary Sea Base USS Hershel "Woody" Williams, Nov. 12, 2021. Marine Corps aircraft like Ospreys are part of a new approach to crisis response after the service quietly ended rotations of larger units that had begun in the wake of the 2012 attack in Benghazi, Libya. (Malachi Lakey/U.S. Navy)

DJIBOUTI — A medical evacuation in the Indian Ocean last week relied on Marine Corps aircraft recently sent to Africa after the service quietly dropped a crisis response approach born in the wake of the deadly 2012 attack in Benghazi, Libya.

The MV-22 Ospreys that delivered Air Force pararescuemen to a cargo ship to save a British merchant mariner were from San Diego-based Marine Medium Tiltrotor Squadron 161, which deployed to Djibouti in September. So was a KC-130 tanker that provided aerial refueling along the way.

Previously, a Special Marine Air-Ground Task Force in Kuwait sent tilt-rotor detachments to Camp Lemonnier in Djibouti, Osprey pilot Capt. Marc Meier said in an interview at the base in October. 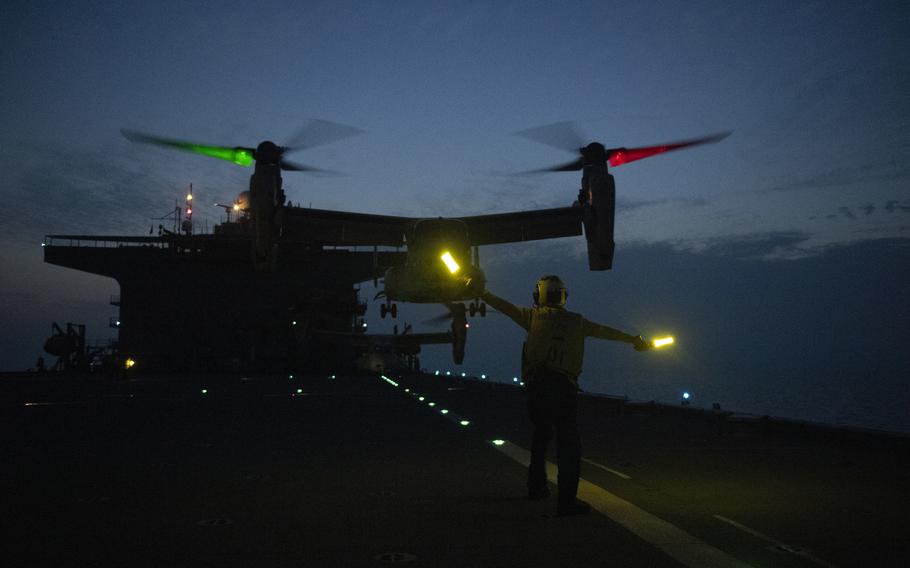 “The last rotation of the SPMAGTF-CR-CC redeployed last month, and will not be replaced by another permanent element,” 1st Lt. Jack Coppola, a Marine spokesman in Tampa, Fla., said in an email.

Marine Corps officials said earlier this month that they would provide details on the unannounced decision to cease SPMAGTF rotations to the Middle East and Africa.

This week, a service official referred the question to the Pentagon, which did not immediately respond to a query Wednesday.

Commanded by a colonel, the specially tailored task force was made up of over 2,000 troops in command, air combat, logistics and ground combat elements.

A similar unit at Moron Air Base in Spain, SPMAGTF-CR-Africa Command, was not replaced after its last rotation, another spokesman confirmed by phone. 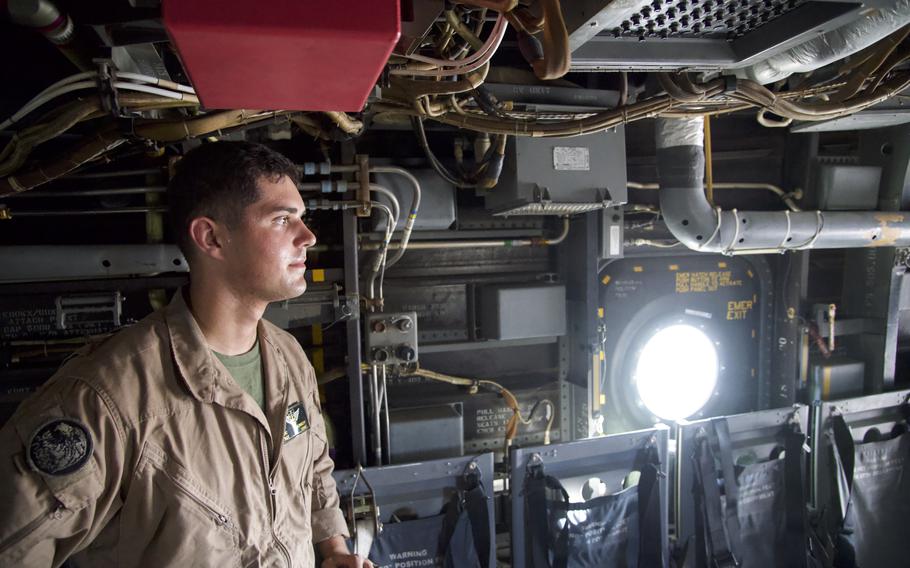 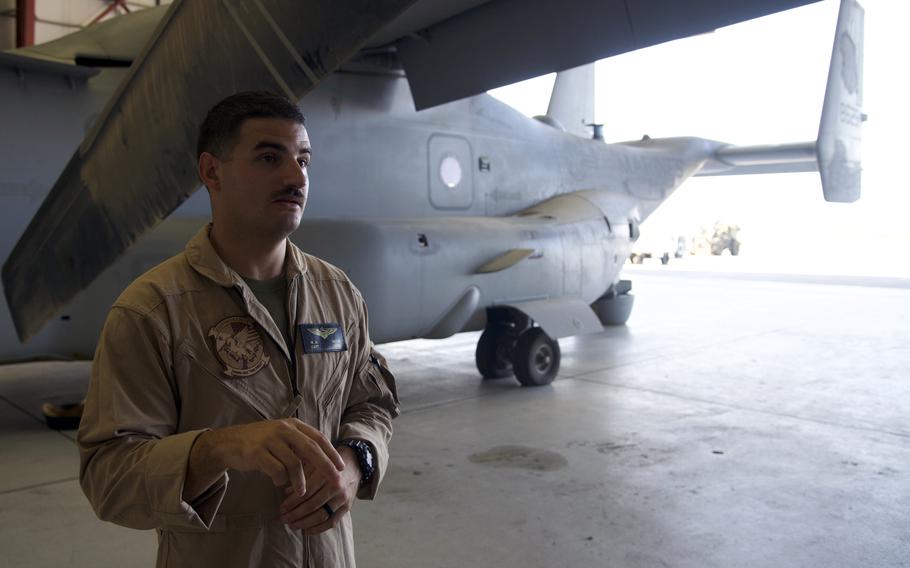 Buy Photo
Capt. Marc Meier, an MV-22 Osprey pilot deployed to Camp Lemonnier, Djibouti, on a deployment with Marine Medium Tiltrotor Squadron 161, discusses the squadron’s mission and alert status inside a hangar Oct. 27, 2021, at the U.S. military’s only permanent base in Africa. (Chad Garland/Stars and Stripes)

Instead, a North Carolina-based tilt-rotor squadron was sent to support the Army’s Italy-based 173rd Airborne Brigade Combat Team, which serves as the North and West African response force.

The Marines’ Spain-based crisis response force was stood up in early 2013 to address security concerns in Africa.

That move came in the wake of the attack on the U.S. diplomatic facility in Benghazi, Libya, in September 2012 that killed Ambassador Chris Stevens and three other Americans. The concept was later adopted in other regional commands.

The Corps was also ending rotations of a Southern Command SPMAGTF that had been headquartered at Soto Cano Air Base in Honduras, it said in budget documents released in June. That was expected to free up $3 million a year as the service refocuses on the Indo-Pacific region.

But it’s also an asset for the East Africa Response Force, currently made up of troops from the Army National Guard’s 86th Infantry Brigade Combat Team (Mountain). The squadron has six Ospreys and two KC-130 refuelers, which help extend the range of the tilt-rotor aircraft. The MV-22s can carry heavier loads and fly higher and faster than military helicopters, Meier said, important advantages on the vast African continent. 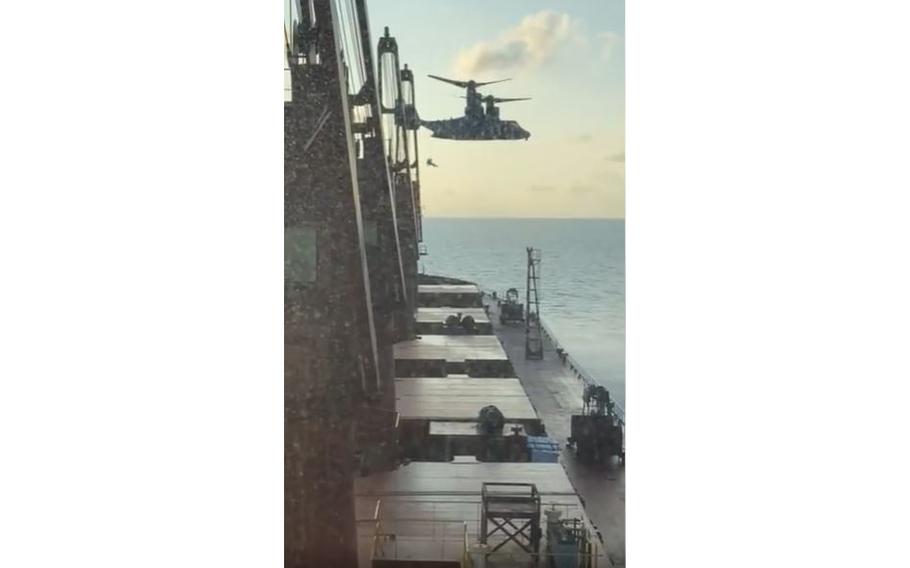 A screenshot from a video shows a rescue at sea by Air Force pararescuemen of a U.K. civilian mariner in distress, Nov. 13-14, 2021. The Osprey aircraft came from the San Diego-based Marine Medium Tiltrotor Squadron 161, which deployed to Djibouti in September. (U.S. Africa Command) 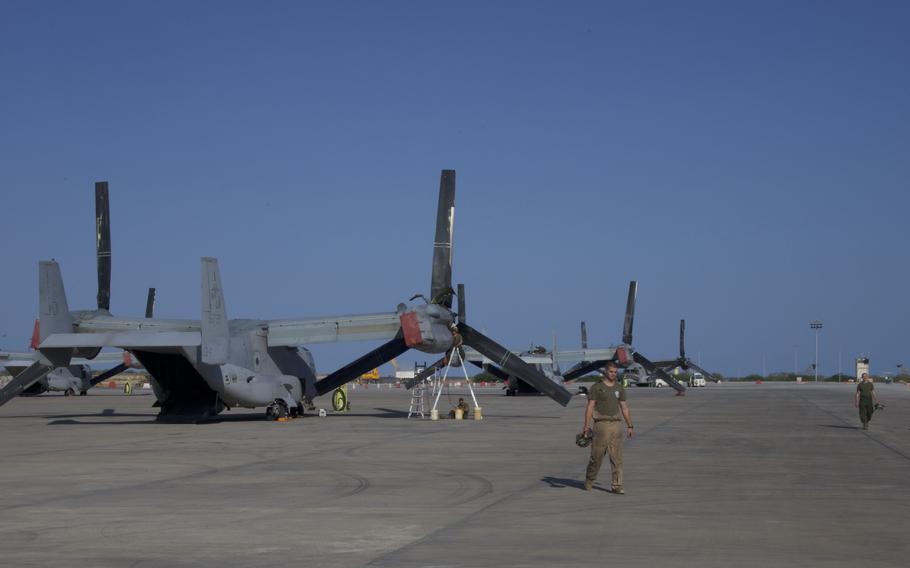 Buy Photo
Crews with Marine Medium Tiltrotor Squadron 161 at Camp Lemonnier, Djibouti, perform maintenance on MV-22 Ospreys that are part of a new rotational deployment, Oct. 27, 2021, at the U.S. military’s only permanent base in Africa. Crews were put on alert during an unfolding coup about 750 miles away in Sudan. (Chad Garland/Stars and Stripes)

“This place is huge,” Meier said. “You see it on a map, but … until you’re flying around it in the seat, you don’t realize (how big it is).”

Just one day after the squadron reached full operational capability in late October, a coup broke out in Sudan, about 760 miles from Djibouti — about the distance from New York City to Milwaukee.

As U.S. military officials at Camp Lemonnier prepared for a potential mission in the wake of the unrest, they updated plans to account for capabilities the Ospreys offered. Crews were told to be ready to go within a few hours’ notice for a possible embassy evacuation.