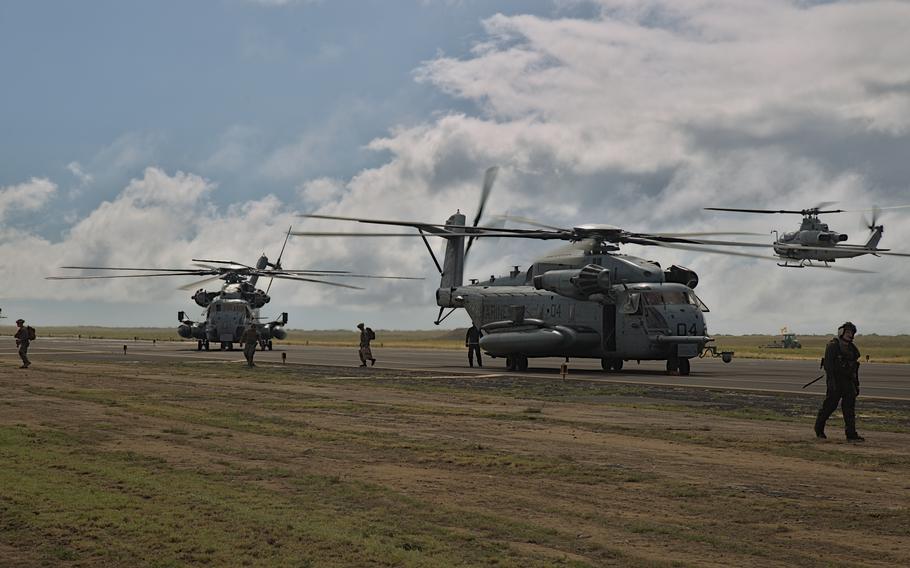 (Tribune News Service) — More Hawaii Marines are on the move as the Corps continues a wholesale reorganization to focus on becoming a fast-moving, island-hopping, missile-firing force capable of striking enemy ships at sea to aid the Navy in a possible conflict with China.

Marine units are coming and going at a rapid clip at Marine Corps Base Hawaii as the force evolves to face a China threat, but the buildup of the support squadron doesn’t mean 200 more Marines coming to Oahu.

“These Marines will join the unit from a variety of sources,“ with some coming from within Hawaii and deactivating units, others from traditional training pipelines after boot camp, and some from other units across the Marine Corps, said Capt. Jordan Fox, a spokesman for Marine Aircraft Group 24.

Through what it calls Force Design 2030, the Marine Corps is taking drastic steps to reshape itself for “peer“ competition with China, which invested heavily in advanced, long-range missiles while the United States was preoccupied with low-tech guerrilla warfare in Iraq and Afghanistan. A new Hawaii Marine Littoral Regiment — the first in the Corps — is expected to soon be activated and will be made up of 1,800 to 2,000 Marines drawn in part from the 1st Battalion, 3rd Marine Regiment at Kaneohe Bay.

The unit will utilize amphibious ships and boats, with a new class of vessel, the Light Amphibious Warship, being designed for its needs.

That radical restructuring of the Marine Corps in Hawaii includes the planned removal of all 16 tanklike amphibious vehicles and elimination of all cannon artillery.

Approximately 500 of 650 artillery Marines with the 1st Battalion, 12th Marine Regiment will be moved elsewhere, with the remainder to be part of a medium-range missile battery outfitted with Naval Strike Missiles intended to inflict damage to ships at sea, the Marine Corps said.

Attached to the Marine Littoral Regiment, it would be the first such ground-based missile-­firing unit in Hawaii.

The Corps also said it is removing all of its conventional helicopters at the Marine Corps base — more than three dozen in all — and will replace them with a squadron of 12 to 15 fixed-wing KC-130 refueling and cargo aircraft.

Two squadrons of MV-22 tilt-rotor Ospreys will remain and are key to the new plan for long-range transport.

Also on tap is a plan to trade smaller RQ-21A Blackjack drones for six big MQ-9A Reaper uncrewed aerial systems that have a wingspan of 66 feet or more.

About 60 Marines with Combat Assault Company, the unit that operates amphibious assault vehicles, will transfer to the new Marine Littoral Regiment as an engineer platoon.

The 2nd and 3rd infantry battalions at Kaneohe will be deactivated, with many of those Marines also expected to become part of the Marine Littoral Regiment. That formation in turn will include fast-moving sub-units that can operate as a disruptive “inside force“ within range of enemy missiles.

Under that scenario, detachments of 50 to 80 Marines would set up rapidly, fire missiles from trucks and move to avoid being targeted.

The new concept came together during the two-week Large Scale Exercise 2021 in August with groups of Hawaii-based artillery Marines arriving ashore at the Pacific Missile Range Facility on Kauai via big hovercraft and MV-22 tilt-rotor Ospreys.

Their goal was to detect, while camouflaged and with low digital signatures, passing enemy ships.

In one of the most realistic Marine Corps field experiments to date of a new unmanned truck missile launcher, two Naval Strike Missiles were fired over 100 nautical miles (115 statute miles) to strike the decommissioned Navy frigate ex-USS Ingraham 60 nautical miles from Kauai.

To avoid an adversary counterattack, the Navy Marine Expeditionary Ship Interdiction System “followed“ a leader vehicle to a Marine KC-130 on the airfield to practice loading it.

The scenario — watched by Chief of Naval Operations Adm. Mike Gilday — ”highlighted the new and important role Marines will play for the naval and joint force in future global competition and conflicts involving key maritime terrain,“ the Corps said in a release.