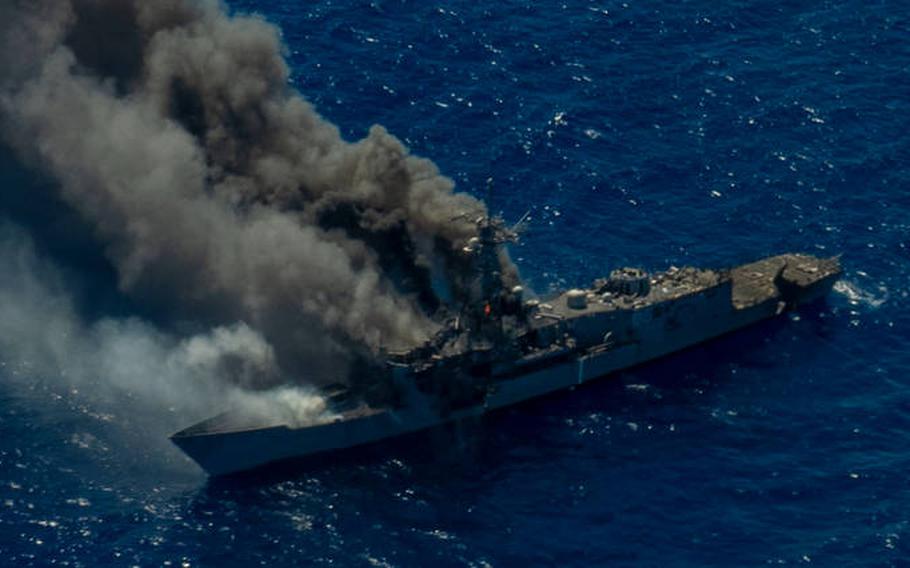 The fast-moving Marines—who arrived by tilt-rotor Ospreys and big hovercraft—not only fired their own missiles, but also developed a targeting solution for a larger force that included the Pearl Harbor submarine USS Chicago, a P-8 maritime patrol aircraft and Navy and Marine Corps F /A-18 Super Hornets, officials said.

As the shore-based 1st Battalion, 12th Marines hit the ship with two missiles fired from an unmanned truck that is capable of following a manned vehicle, the platoon picked up and quickly moved to a new location—to avoid being targeted by would-be enemy missiles.

It's a tactic that the Marine Corps is heavily invested in refining for regular use in the East and South China Seas should war erupt with China.

The "multi-domain " choreography, which seeks to synchronize U.S. capabilities across services on and under the sea, on land and in air, space and cyberspace to overwhelming effect, capped off the two-week Large Scale Exercise 2021, a global effort by the Navy and Marine Corps to fight across the Pacific, Atlantic and Mediterranean simultaneously, if necessary.

The U.S. Navy 3rd Fleet, which leads naval forces from the West Coast to the international dateline, moved its San Diego headquarters to a series of 13 tents at Joint Base Pearl Harbor-Hickam for the Aug. 3 to 16 exercise.

Personnel in the command's forward-based "expeditionary maritime operations center " watched livestreamed footage of the sinking of the decommissioned frigate ex-USS Ingraham far off the coast of Kauai.

"Lethal combat power was effectively applied to a variety of maritime threats over the last two weeks in a simulated environment as part of the Navy's Large Scale Exercise and expertly demonstrated Sunday with live ordnance, " 3rd Fleet Commander Vice Adm. Steve Koehler said in a release. "The precise and coordinated strikes from the Navy and our joint teammates resulted in the rapid destruction and sinking of the target ship and exemplify our ability to decisively apply force in the maritime battlespace."

F /A-18 Super Hornets flew off the deck of the aircraft carrier USS Carl Vinson, which was sailing about 90 miles north of Oahu on Saturday, carrying what looked like 1, 000-pound AGM-154 joint standoff glide weapons with "launch and leave " capability.

As part of the demonstration of rapid response from multiple platforms, four Marine Corps F /A-18 attack aircraft also fired two Harpoon missiles at the frigate, an official said.

The two Naval Strike Missiles fired by the shore-based Marines flew over 100 nautical miles (115 statute miles ) to strike the Ingraham. For the exercise, those missiles did not have warheads.

Sink exercises, which are costly and complex events, have to be conducted in waters at least 6, 000 feet deep and at least 50 nautical miles from land, the Navy said. Prior to sinking, the 453-foot frigate was shown smoking and heavily damaged by the multi-pronged attack.