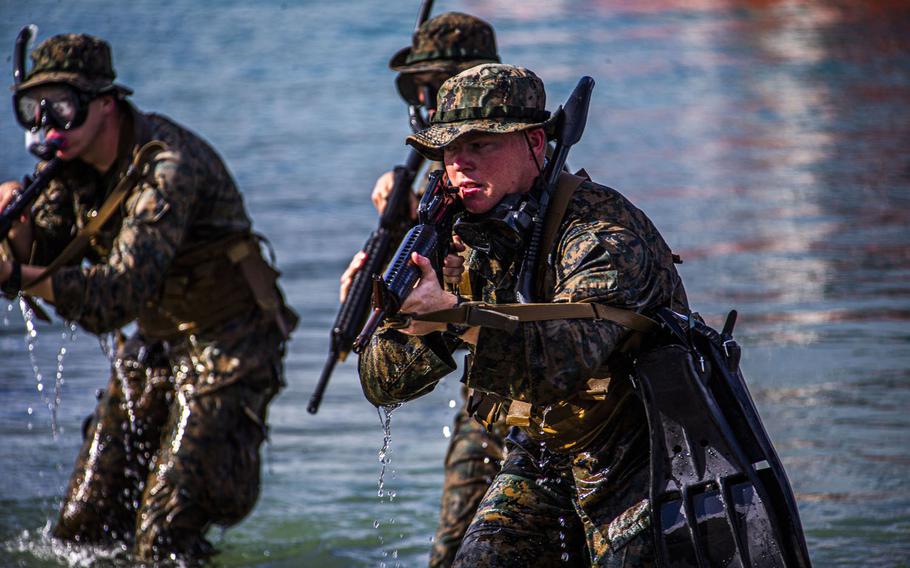 HONOLULU (Tribune News Service) — A space-crunched Marine Corps is looking for additional locations to house and train its "future force" in Hawaii, and one consideration may be hundreds of acres of undeveloped land on the east side of the former Naval Air Station Barbers Point.

The Corps has shown interest in the land for years, including the 18-hole Barbers Point Golf Course owned by the Navy, but also now as it reorganizes its forces to deter or fight against China.

One possible effect is that the Marines could end up getting back part of one of their old bases: Marine Corps Air Station Ewa, which was attacked on Dec. 7, 1941, and had a key role in preparation for the Battle of Midway. The Marine base was deactivated in 1952 and became part of the larger Barbers Point facility.

The land examination comes as one defense analyst said Hawaii could become a staging area for Marines being redeployed around the theater to complicate Chinese and North Korean targeting.

A couple of years ago, high-¬ranking Marine Corps officials came from Washington, D.C., to look at what remains of the 3, 819-acre Barbers Point base that was shuttered in 1999 as part of the "base realignment and closure " process.

More recently, barracks and electrical work at the Kaneohe Bay base was identified as the top unfunded military construction priority for fiscal 2022 for the entire Marine Corps, with an appropriation of $166 million needed to make needed improvements, the Corps said.

The east end of the former Barbers Point base is now a patchwork of land distribution, with large plots of undeveloped acreage reaching to the sea still in the hands of the Navy and/or conveyed or awaiting conveyance mainly to the City and County of Honolulu, Hunt Cos. Hawaii and state Department of Hawaiian Home Lands.

Some of the remaining Navy land conveyances have been put on hold, according to one property user.

"The Marine Corps, as part of a larger (Defense Department) effort, is currently exploring multiple options to determine the best locations to train and house the future force required in Hawaii," Capt. Eric Abrams, a spokesman for Marine Corps Base Hawaii, said in an email.

"At this time, no decision has been made about whether the land at Barbers Point will factor into the eventual solution," he said. "We are currently pending the results of a land use study and range and training area requirement study, which will drive facility requirements."

Vacant land at Barbers Point, which reverted to its original name, Kalaeloa, after the Navy base closed, was previously eyed for development related to efforts to bring an aircraft carrier to Pearl Harbor and its air wing to Barbers Point.

In 2007 the Navy decided to send the USS Carl Vinson to San Diego, and the next year agreed to convey 499 acres at Kalaeloa, then appraised at $75 million, to a Hunt Cos. partnership, which had made extensive repairs on Ford Island.

Historic-preservation reviews have tied up some land use plans, and a large swath of undeveloped acreage still extends from Roosevelt Avenue to the sea.

DHHL received 98-and 49-acre parcels in the area and said it is moving ahead with a solar farm.

"We haven't been approached by the Marine Corps with regard to any of our Kalaeloa lands, " said spokesman Cedric Duarte.

Abrams, the Marine Corps spokesman, said about 8,000 Marines are stationed in Hawaii. But changes associated with the major reorganization of the entire Marine Corps "will cause the total number of Marines in Hawaii to vary for the next several years," he said.

New units and capabilities are coming, and old units are leaving. The Marines are turning into a fast-moving missile-firing force expected to have new Light Amphibious Warships in Hawaii that can make beach landings.

Marine Corps Base Hawaii was, and still is, also expecting to get 2,700 Marines, with the Corps attempting for years to pare down its force on the Japanese island of Okinawa.

Maj. Joshua Benson, a Marine Corps spokesman in Quantico, Va., said in February that there was no change to that plan.

"As more aspects of (the reorganization) begin to take shape over the coming years, items such as this could be discussed with host nations, but as of now, there is no change to the program of record," he said.

Past Navy and Marine Corps studies said relocating units wouldn't fit on the Kaneohe Bay Marine Corps base, but all could be accommodated on Oahu Defense Department land.

Carl Schuster, a retired Navy captain, a former director of operations at U.S. Pacific Command's Joint Intelligence Center and an adjunct professor at Hawaii Pacific University, said he believes the Air Force and the Navy will be expanding infrastructure across the Pacific, including in and around Hawaii, but with much of that effort involving constructing or reactivating a series of facilities in remote areas to the west.

The moves would be in preparation for a possible war over Taiwan or potential Chinese aggression in the South China Sea.

"The base location balancing act is between getting positioning closer to the possible theater of operations while maintaining sufficient distance to defend against a sudden missile attack," he said.

Hawaii could become a staging area for a rotating Marine Expeditionary Unit-size force of about 2,200 Marines, he added.

"Also, during a South China Sea contingency, they can stage a follow-on MEU here while the seaborne one is forward," Schuster said. "The MEU here can be seen as a follow-on echelon that can go forward almost immediately and be in Guam, Palau, the Philippines or Australia in a matter of hours."