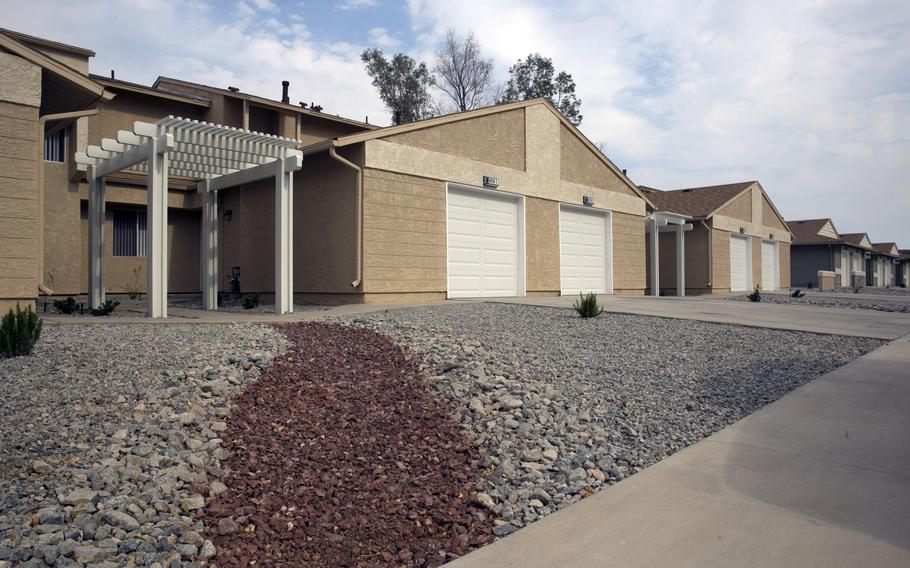 Marines gave base housing a C+ in the latest militarywide satisfaction survey — slightly higher than the other services — though respondents were least satisfied with move-in conditions and tracking of reported problems.

The Marine Corps is the latest service to release results from the Defense Department’s annual housing satisfaction survey for 2020, conducted in December and January.

It’s the first year for a new anonymous survey that is standardized across the services, though residents have been surveyed since housing was privatized in the 1990s.

The results come over two years after a Reuters investigation revealed mold and pest infestation, water leaks and other hazards in privatized military housing, which led to congressional hearings and testimony from military spouses.

More than one-fifth of the nearly 20,000 residents of Marine Corps privatized base housing responded to the survey, reporting an overall satisfaction score of 78 on a scale of 100, the service said in a statement published Monday.

“The responses provided great insight and supported my obligation to ensure that Marines, families and civilians’ voices are heard,” said Maj. Gen. Ted Banta, head of Marine Corps Installations Command, in the statement. “The survey responses will be used to shape housing and housing services.”

Earlier this year, the Air Force said its privatized housing scored an overall satisfaction rate of 77.1, with about 30% of tenants responding. The service did not say the total number of surveys that were sent out.

The services also sought feedback on government-owned housing, though they did not all provide data on how many surveys were distributed to tenants of those facilities or what the resulting scores were.

The tenant canvas results are categorized by installation and help tell military and privatized housing company officials what areas need improvement. They were also broken down by property, service and overall satisfaction scores.

Service scores reached 80.8 for the Marine Corps, while satisfaction with properties was scored at 77.8. The highest-rated privatized base housing in terms of service, with a score of 95, was the Mid-Atlantic Military Family Communities, which operates housing around Norfolk, Va.

Tracking and following-up on reported problems was among the categories with the lowest satisfaction rates, along with landscaping and move-in condition. But tenants rated the quality of maintenance work among the highest, along with safety and courtesy of maintenance and management staff.

Just one of the 15 Marine Corps installations scored under 70 overall, which the service considers below average. The installation was not named.

Projects with low ratings are required to develop action plans to address issues revealed in the surveys, the Marine Corps said. Progress is assessed quarterly at a regional level.

Since the congressional hearings in late 2019, the Pentagon and the services have taken steps to improve housing, including putting in place a tenant bill of rights.

Marines should be able to expect quality housing and “exceptional service” no matter where they are stationed, Marine Commandant Gen. David Berger said in the statement.