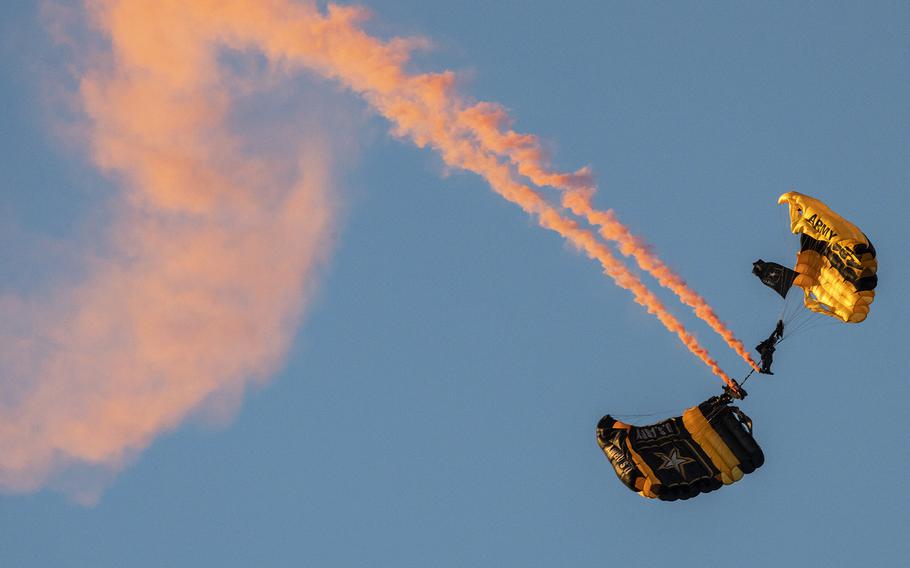 The Army’s Golden Knights parachute team performs before the Army 10 Miler Sunday, Oct. 9, 2022, at the Pentagon. (Stars and Stripes)

(Tribune News Service) — The U.S Army's Golden Knights will be dropping in on the 2023 CenterPoint Energy Dayton Air Show Presented by Kroger in July 2023.

The Army's Golden Knights parachute team and two new acts will join the Air Force Thunderbirds for the 2023 show. The Red Bull Helicopter and MiG-17F Jet Demo will be part of the 48th annual show on July 22 and 23 at Dayton International Airport.

"The Golden Knights, the Army's official demonstration team, will thrill spectators with their intricate canopy work along with skydiving formations and landings that require extreme precision," the show said in an announcement Tuesday.

Formed in 1959, the 12-member team will travel to Dayton in its C-147A aircraft, which will also serve as the jump aircraft, the show said. The Golden Knights appeared in Dayton earlier this year.

Other show highlights planned for next July: A 5,300 lbs. helicopter flying upside down? A piece of cake for the Red Bull Helicopter, a MBB BO-105C flown by Aaron Fitzgerald.

The multipurpose light twin-engine German helicopter has flexible maneuverability and a performance that allows for rollovers and backflips.

"It's the only helicopter fit for aerobatics to this day," show organizers said.

The Red Bull Helicopter last appeared in Dayton in 2011.

And the MiG-17F was the primary enemy aircraft during the Vietnam War. Up until the F-16 fighter jets entered service, it was the tightest-turning fighter in the world, according to the air show.

"We're so pleased to continue to bring such phenomenal performers to our 2023 shows to give adults and children alike an unforgettable experience," said Scott Buchanan, chairman of the United States Air & Trade Show board of trustees, producers of the show. "We're looking forward to continue adding elite performers to our lineup."