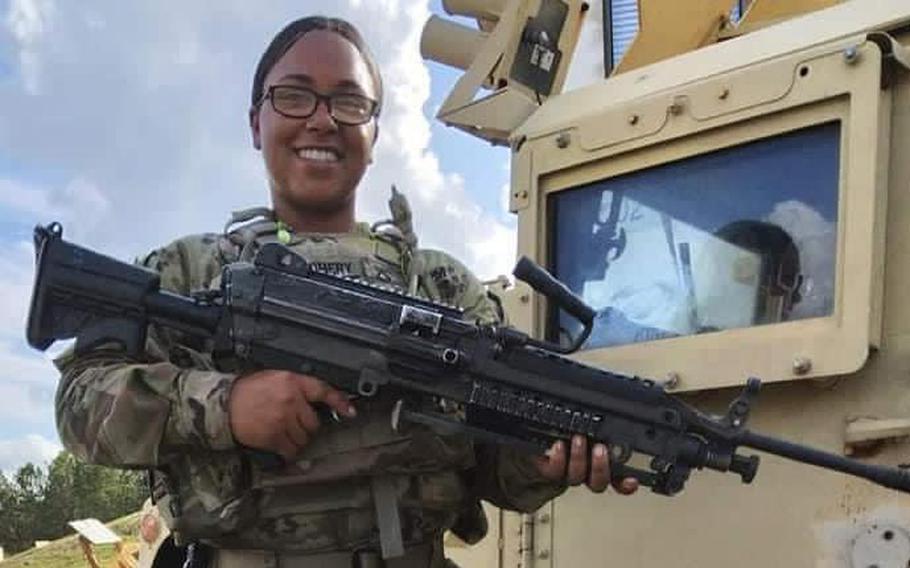 Pfc. Denisha Montgomery, shown during an exercise in an undated photo from social media, was found dead in her barracks room in Wiesbaden, Germany, on Aug. 9, 2022. Her death is under investigation. Montgomery was posthumously promoted to specialist. (Facebook)

Sen. Charles Grassley has asked the Army’s senior criminal investigator to provide answers about the investigation into the death of Spc. Denisha Montgomery, citing “disturbing” allegations she made weeks before her body was found in her barracks in Germany.

Montgomery, assigned to the 139th Military Police Company, was found unresponsive, hanging from her military-issued belt in her barracks room at Lucius Clay Kaserne in Wiesbaden.

She was pronounced dead at the scene. After a brief investigation by German police, the case was turned over to CID. U.S. Army Europe and Africa announced her death five days later.

Air Force Col. Alice Briones, the director of the Armed Forces Medical Examiner System, who conducted Montgomery’s autopsy, later determined the death to be a suicide, Army officials told Stars and Stripes in a statement Nov. 9.

Montgomery, a mother of three, was deployed to Germany from Fort Stewart, Ga., and was scheduled to return with her unit at the end of September. Her family planned a large welcome home celebration.

Instead, “my beautiful firstborn came home in a box, with no explanation,” Montgomery’s mother, Heather Montgomery, said in a statement to Stars in Stripes on Wednesday.

In a July 19 video call with her family, Montgomery said that four fellow military police officers had physically assaulted her while traveling back to base from a water park. 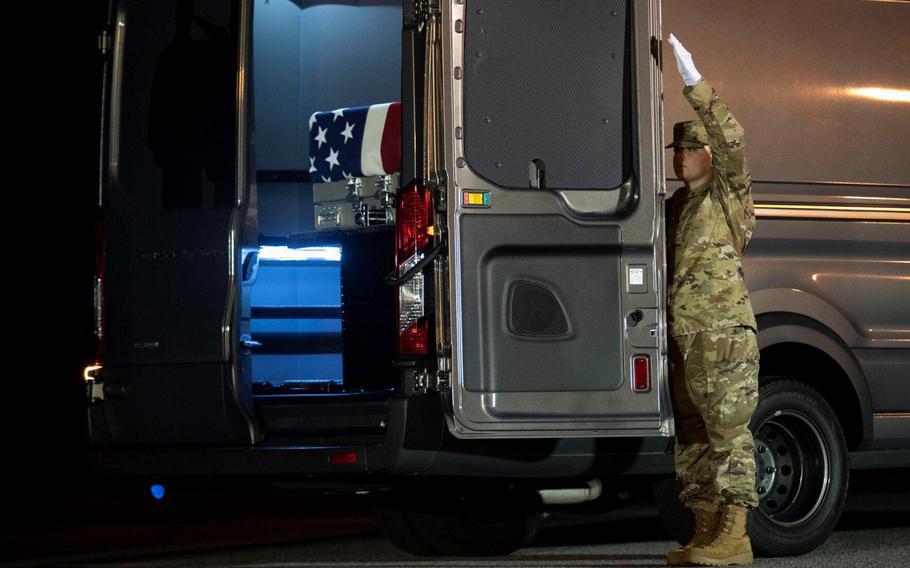 Air Force Staff Sgt. Brenda Barnhart-Frame closes the door of a vehicle containing the remains of Spc. Denisha Montgomery at Dover Air Force Base, Del., on Aug. 15, 2022. Montgomery, of Elizabethtown, Ky., was assigned to the 139th Military Police Company at Fort Stewart, Ga. She died Aug. 9 while deployed to Wiesbaden, Germany. (Cliff Owen)

In tears, the soldier recounted being choked and thinking that she was going to die.

Copies of phone transcripts provided to Stars and Stripes showed that Montgomery did not trust her military leadership. She texted her uncle that a first sergeant in her command had dissuaded her from filing a report of the assault.

Grassley, an Iowa Republican, wrote that Montgomery also said she had reported a sexual assault of another female soldier in her platoon.

“The clear conflict between the video description from PFC Montgomery and CID demands explanation,” Grassley wrote. “The allegations presented to my office are disturbing and illustrate an example of a sexual assault that has yet to see justice.”

Grassley’s letter demanded a release of the complete CID report to his office by Dec. 20. Grassley also asked whether investigators have verified allegations made in Montgomery’s video, identified and investigated soldiers who were with her and looked into allegations of sexual assault by or against Montgomery.

On Wednesday, Army spokesman Lt. Col. Terence Kelley said the service “has endeavored to provide all possible information to both Spc. Denisha Montgomery’s family and Congress throughout the ongoing law enforcement investigation into her death and will provide thorough overviews to both once complete.”

Last month, Army officials told Stars and Stripes they hoped to complete the case soon and would provide Montgomery’s family with “a comprehensive update” of their findings.

“The circumstances surrounding Denisha’s death are extremely troubling, and the military’s response to this family has been horrific,” Lindsey Knapp, a representative for the family and executive director of the advocacy organization Combat Sexual Assault, said in an email Wednesday. “Denisha deserves justice, and we will not rest until that occurs.”

In 2021, Grassley sponsored the bipartisan Military Justice Improvement and Prevention Act, which came in the aftermath of the killing of Army Spc. Vanessa Guillen at Fort Hood, Texas.