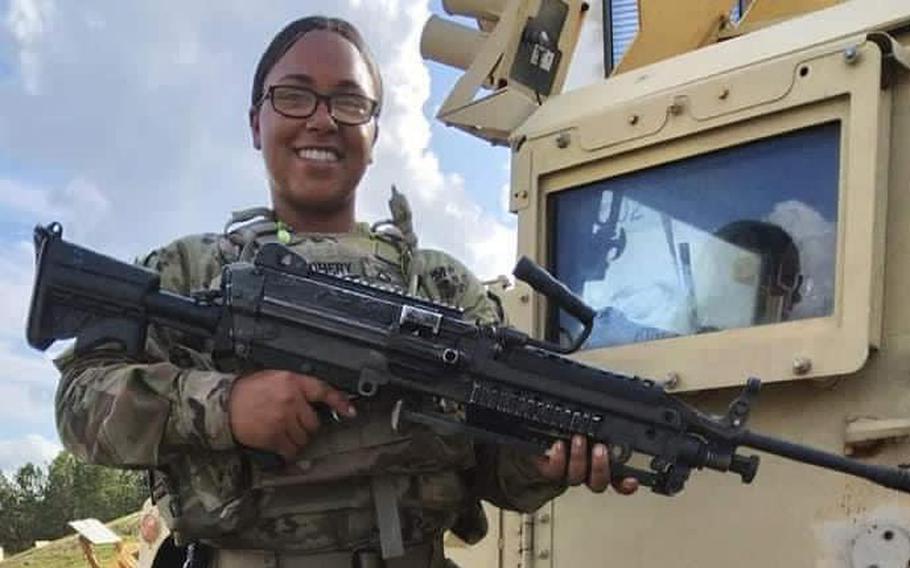 Pfc. Denisha Montgomery, shown during an exercise in an undated photo from social media, was found dead in her barracks room in Wiesbaden, Germany, Aug. 9, 2022. Her death is under investigation. Montgomery was posthumously promoted to specialist. (Facebook)

KAISERSLAUTERN, Germany — A soldier told her family she had been assaulted by three soldiers in her squad and was then dissuaded by her first sergeant from filing an official report. Two weeks later, she was found dead in her barracks.

Spc. Denisha Montgomery, 27, was found unresponsive at Lucius Clay Barracks in Wiesbaden on Aug. 9 and was pronounced dead at the scene. Family members were told during preliminary findings that the death was likely a suicide.

Soon afterward, family members who believe she was murdered by her fellow military police soldiers publicly shared a July 19 video call in which Montgomery detailed the allegations of assault.

Now, text messages exchanged with her uncle that a family lawyer released to Stars and Stripes show a soldier fearful of reprisal and worried that she would be punished for fighting back, despite years of Army initiatives directed at preventing such violence and providing pathways to report incidents.

Although the Army said recently that the investigation into the circumstances that led to her death remains ongoing, her death now has been officially ruled a suicide.

The suicide determination was made by Air Force Col. Alice Briones, the director of the Armed Forces Medical Examiner System, who also conducted Montgomery’s autopsy, Army officials told Stars and Stripes Nov. 9 in a statement. 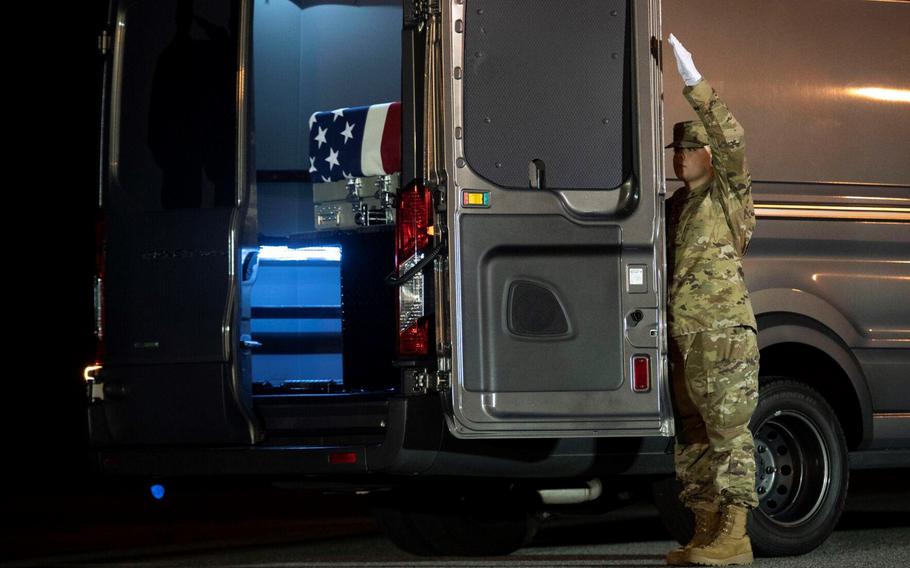 Montgomery’s family members say they are frustrated by the pace of the investigation and remain unconvinced that she took her own life.

During the video call, part of which was first shared on Newsnationnow.com in September, Montgomery tells members of her family that she was assaulted in a vehicle after visiting a water park with soldiers.

“They choked me out … I kept telling them … I can’t breathe,” Montgomery said in the shaky cell phone video. “I’ve never been so scared in my life.”

Showing her family a series of bruises and wounds on her body, Montgomery said, “I just want to come home. Look what they did to me.”

Copies of phone transcripts provided to Stars and Stripes show that Montgomery’s father reached out to the Red Cross the day of the video call to request assistance for his daughter.

In a follow-up call, the Red Cross advised his daughter to contact her chain of command and report to a hospital. It’s unclear whether she went to the hospital before her death. 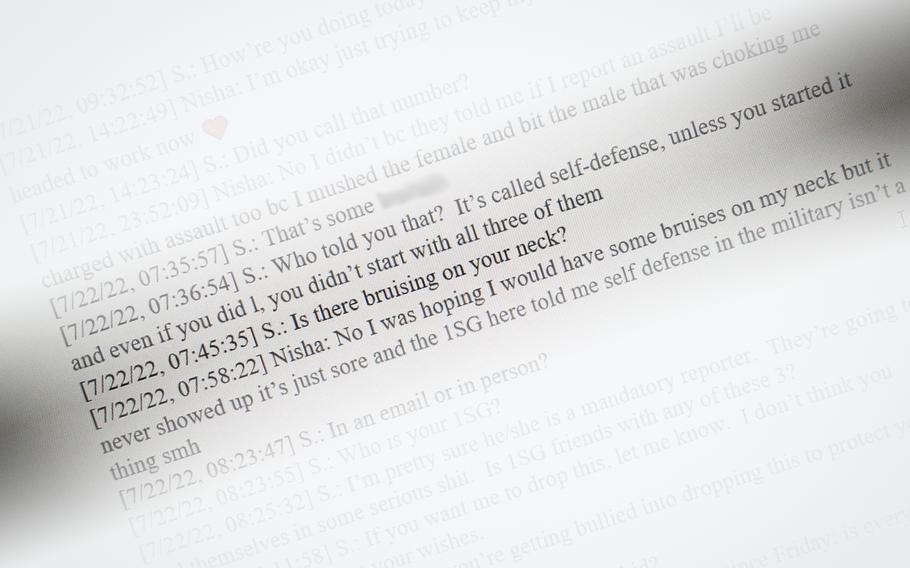 An excerpt of a text transcript shows a conversation between Spc. Denisha Montgomery and a family member July 22, 2022. Montgomery was found dead in her barracks room in Wiesbaden, Germany, Aug. 9. (Never Alone Advocacy) 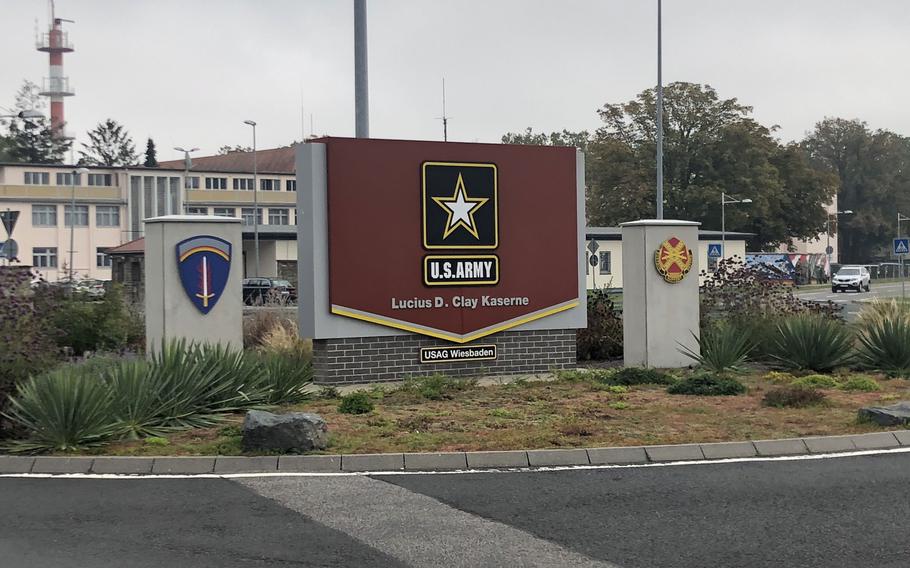 The front gate of Clay Kaserne, shown Oct. 13, 2022. Denisha Montgomery died in her barracks room on post Aug. 9, 2022, while assigned to the 139th Military Police Company. (David Edge/Stars and Stripes)

Transcripts provided to Stars and Stripes show she texted her uncle two days later, telling him that a first sergeant in her command had dissuaded her from filing a report.

“They told me if I report an assault, I’ll be charged with assault too because I mushed (sic) the female and bit the male that was choking me … 1SG here told me self defense in the military isn’t a thing smh,” Montgomery wrote July 21, using the acronym for “shaking my head.”

Defense Department policy would require a first sergeant to report the allegations of a crime made by a soldier.

After several days of discussion and a couple of days of silence, Montgomery continued the conversation with her uncle.

“I’m sorry I’ve just been depressed and didn’t want to talk about it anymore I decided not to say anything I didn’t wanna end up getting in trouble too … ” she wrote July 27. “I’m okay my bruises are starting to go away I’ve just been keeping my head down staying in my room n going to work when I get back to Stewart I have another NCO who is going to get me in his squad so I don’t have to directly deal with those people.

“But I’m okay I love you so much n I appreciate all of your help.”

A spokesman for the Army’s Criminal Investigation Division said the agency has no record of Montgomery talking to its investigators.

“There have been no indications of criminal activity, but the Army CID law enforcement investigation will continue until all leads have been investigated,” a spokesman wrote by email.

Army investigators say they hope to complete the case soon and will provide Montgomery’s family with “a comprehensive update” of their findings.

The Army has not stated whether any soldiers were suspended, disarmed or placed on alternate duty pending the investigation.

“She told us ‘Please record this. We might need this in case something happens,’” recalled Sgt. Brooklyn Price, Montgomery’s sister and a logistics specialist with 5th Special Forces Group at Fort Campbell, Ky.

Montgomery’s body arrived in Elizabethtown, Ky., her hometown, on Aug. 26, and she received a burial with military honors.

“We’re not doing great,” Price said of the family. “There is a lot of emotion right now. We’re not only sad, we’re broken-hearted, confused and upset because we don’t have answers.”

A lawyer for the family said some of the confusion was created by the limited communication with the military early on.

During the initial casualty notification process, the family was told Montgomery’s death was a suicide before autopsy results and other steps were complete, said Lindsey Knapp, who is also the executive director of Combat Sexual Assault, an advocacy organization.

The Army insists that it was German authorities, not their investigators, who initially ruled the case a suicide. The service says Montgomery’s family should have been told the assessment was tentative.

Wiesbaden police officers responded to Clay Kaserne along with a doctor, which is standard procedure in these cases, police chief superintendent Andreas Hemmes told Stars and Stripes by email Wednesday.

The German doctor and investigators did not find any evidence of third-party involvement, Hemmes said, adding that German officials did not perform an autopsy.

Local police then handed their findings to the Wiesbaden public prosecutor's office, which did not assert jurisdiction and sent the case back to the Army for investigation.

It is unclear whether Army casualty assistance officers were cleared to share the early assessment with members of the family.

Price doesn’t believe her sister would have harmed herself without leaving a trace of her intentions.

“Denisha would not have killed herself suddenly,” her sister said. “She was always so thought-out and planned. It’s just not like her to just to act on impulse.”

Price said she delayed her own wedding when Montgomery’s military training conflicted with plans. After the death, Denisha’s mother handed Price a letter from Montgomery, which she wrote for her sister to open on her wedding day.

“If she wrote me a letter to open on my wedding day, really just in case she couldn’t make it because of military training, then I know for a fact she would’ve written something to her kids, to her family. At least something to say ‘I love you.’” 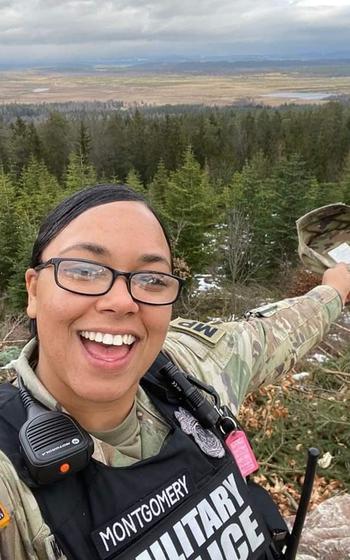 Pfc. Denisha Montgomery, shown here in an undated photo from social media, was found dead on Clay Kaserne, Wiesbaden, Germany, Aug. 9, 2022. Montgomery was assigned to the 139th Military Police Company and deployed to Germany from Fort Stewart, Ga. She was posthumously promoted to specialist. (Facebook)

Montgomery joined the military two years ago, following other family members into the service. She was determined to provide for her three young boys.

She deployed from Fort Stewart, Ga., to Germany with the 139th Military Police Company as part of an influx of troops following Russia’s Feb. 24 invasion of Ukraine.

“We come from a military family,” Price said. “I think she wanted that and wanted to be able to take care of her family and give them a better life than we had growing up.”

Montgomery was scheduled to return home at the end of September. She even sent pictures of her packed rucksack, Price said.

Price said she wants to keep awareness on her sister’s case. She has posted more than 40 TikTok videos with clips of Montgomery and calls for justice.

“She had so much life to live for,” Price said. “All she wanted to do was be an MP and serve her country. Just how she was willing to fight for us. The least we can do is fight for her.”