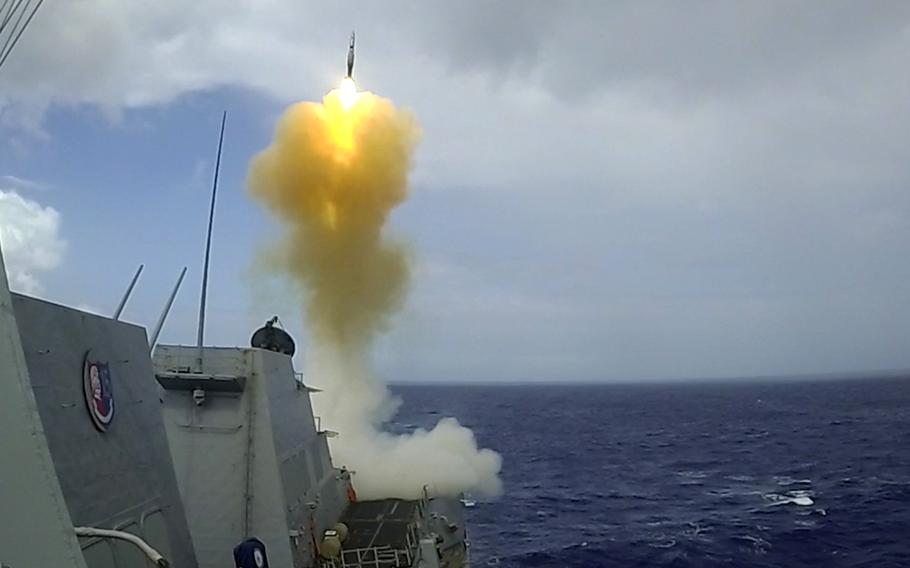 The destroyer USS Dewey launches a missile from the Mark 41 Vertical Launch System during an exercise in the Philippine Sea in March 2022. Lockheed Martin developed a prototype Mid-Range Capability battery for the Army from existing Navy missile and launcher systems, like the Mark 41. (Benjamin Lewis/U.S. Navy)

U.S. soldiers are poised to start training on a new missile system with a range that hasn’t been part of the Army’s arsenal for over 30 years.

The prototype, developed from existing U.S. Navy missile and launcher systems, is part of the Army’s push to counter adversaries like Russia and China by developing a wider array of precision weaponry able to hit targets at greater distances.

“The (midrange capability battery) rapidly progressed from a blank piece of paper in July 2020 to the soldiers’ hands in just over two years,” Lt. Gen. Robert Rasch, the director of the Army’s Rapid Capabilities and Critical Technologies Office, said in a Nov. 30 statement.

The delivery of the new equipment brings back an Army capability that was previously off-limits because of the 1987 Intermediate Nuclear Forces treaty between Washington and Moscow.

That treaty, which expired in 2019, banned missiles with a range between 310 and 3,400 miles. The U.S. stepped away from the pact amid accusations that Russia’s nuclear-capable SSC-8 missile system violated it.

Concerns over such developments prompted the Army to begin research on ground-based systems with ranges that were once banned.

The new Army capability, known as the Typhon Weapon System, involves launchers, missiles and a battery operations center. The system is intended to hit targets at ranges somewhere between 300 and 1,725 miles.

Initial hardware delivery has occurred, and ongoing support is planned through December as soldiers prepare to commence training after the holidays, the Army said.

It’s still not clear, however, where the Army intends to base the weapons once units are fully operational.

“Given range limitations of Army long range precision fires systems, the inability to secure overseas basing rights for these units could limit or negate their effectiveness,” a Dec. 6 Congressional Research Service report stated.