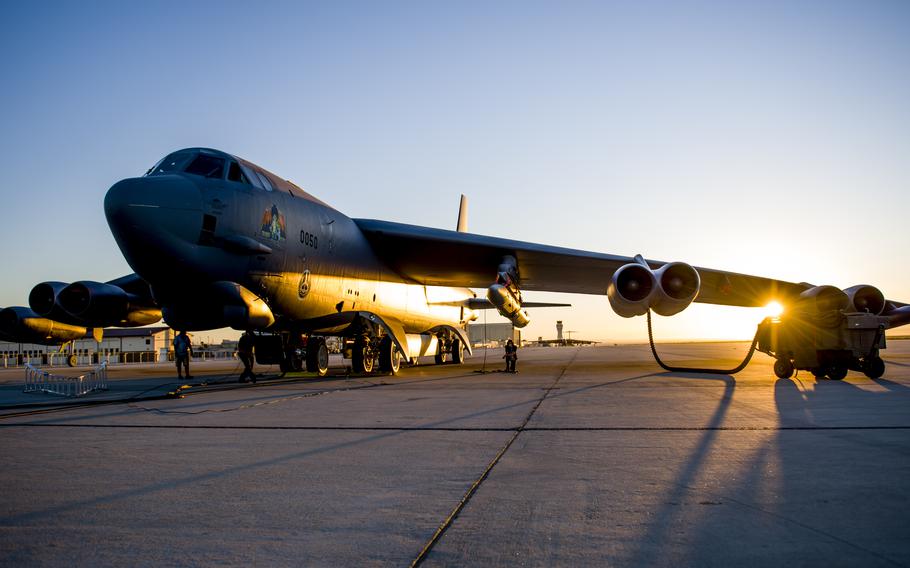 A B-52H Stratofortress assigned to the 419th Flight Test Squadron during pre-flight procedures at Edwards Air Force Base, Calif., in 2020. The aircraft conducted a flight test of the AGM-183A Air-Launched Rapid Response Weapon at the Point Mugu Sea Range off the Southern California coast. (Giancarlo Casem/U.S. Air Force)

WASHINGTON — The Air Force has cleared a key hurdle that will allow the military branch to test fire its first hypersonic weapon — an air-to-ground missile that can travel more than five times the speed of sound.

The Defense Department has poured hundreds of millions of dollars into hypersonic research and development in recent years, and military officials have stressed the importance of being a world leader when it comes to hypersonic defense technologies, especially because Russia and China are also developing them.

“They are completely new to everybody,” Iain Boyd, professor of aerospace engineering at the University of Colorado, said during a podcast in August about the new type of weapon. “And that’s part of the problem they present. They are difficult to defend against.”

Air Force officials said the first step on the road to deploying its AGM-183A hypersonic system — validating the loading and unloading process — was cleared recently at Barksdale Air Force Base in northwestern Louisiana, which is home to the service’s 2nd Bomb Wing.

The weapon — called the Air-Launched Rapid Response Weapon, or ARRW — is an air-to-ground missile powered by a rocket motor that can travel as fast as Mach 8, or eight times the speed of sound. It’s built to be carried by the B-52 Stratofortress.

“It demonstrates the far-reaching capabilities of the B-52 and now it projects its combat capabilities even further with the ARRW system,” Master Sgt. Caleb Nolen, armament systems manager of Barksdale’s Air Force Global Strike Command, said of the test.

“The ARRW is the Air Force’s first air-launched hypersonic weapon that gives combatant commanders the ability to hit time-sensitive targets faster than they were ever able to before,” Air Force Global Strike Command said in a statement.

Development of the ARRW began in earnest in 2018 when the Pentagon gave Lockheed Martin a contract worth almost $500 million to produce it. A preliminary test for the weapon was done a year later.

After making the first step, the Air Force is now clear to move on to the next hurdle in the process — live-fire testing, which is expected to begin sometime before the end of 2022. The Air Force said the ARRW should be operational within a year.

The United States has yet to deploy a modern hypersonic weapon, and the Pentagon has been aggressive in taking a leadership role in the advanced warfare technology. Russia and China have also spent billions to create hypersonic weapons. In fact, Russia claims it has already used its Kinzhal hypersonic missile during the war in Ukraine. That claim has not been publicly confirmed by the U.S. military.

“A new arms race is afoot,” the Carnegie Endowment for International Peace, a Washington-based think tank, said in a statement on its website. “A strategy for managing the race toward these weapons, which combine speed with maneuverability and long ranges, has never been more crucial.”

The advantage of a hypersonic weapon is its greater range. Military officials have said the missiles can simply fly farther. The ARRW is believed to have an operational range of 1,000 miles after it’s released.

Another advantage is hypersonic missiles fly higher in the sky where the air’s thinner and the altitude makes them more difficult to guard against. Their unique maneuverability — they can go up and down and side to side — also gives them a quality other missiles don’t have.

In the Pentagon’s annual China Military Power Report last week, defense officials cautioned Beijing is on track to have 1,500 nuclear weapons by 2035 and its hypersonic development poses a “consequential and systemic challenge” to U.S. national security and defense. In the Pentagon’s National Defense Strategy a few weeks ago, it expressed concern about Russia but identified China as the top U.S. military competitor.

“I would be much more concerned about China [than Russia],” Boyle said during his podcast. “China is the international force to really be reckoned with right now. “Basically, if somebody fired hypersonic weapons at the West today, we wouldn’t know it until it’s too late that these weapons were on top of us.”