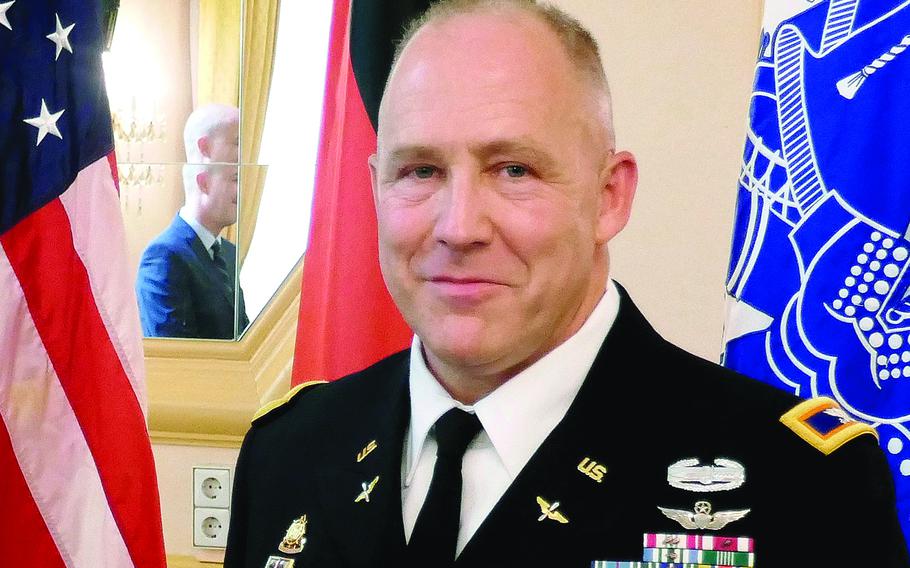 Army Col. Richard Gulley during his retirement ceremony in Stuttgart in June 2017. Gulley is one of now 33 plaintiffs involved in the case against the Army, which in Aug. 2021 was found to have broken the law when it denied dual housing allowances to a contingent of reservists mobilized for assignments in Europe. ( Richard Gulley)

STUTTGART, Germany — More than a year after the Army’s highest review board ruled that the service illegally denied a group of reservists hundreds of thousands of dollars in housing benefits, the panel has been ordered to take up the matter again.

That decision was made Friday by the Court of Federal Claims in Washington and comes in response to the Army’s refusal to follow an order from its own Board of Corrections. Hundreds or even thousands of reservists were likely affected over the years, defense attorneys have said.

The order obligated the service to repay soldiers who had been wrongfully denied housing payments and subjected to erroneous criminal probes that killed careers.

“I was investigated four times in seven years. Missed (brigadier general) promotion, name ruined, damaged my career, my children, my wife,” said Richard Gulley, one of the plaintiffs in the case, who previously served as a colonel at U.S. Africa Command headquarters in Stuttgart. “How many (people’s) lives were destroyed?”

Gulley is one of now 33 plaintiffs suing the Army, which in August 2021 was found to have broken the law when it denied dual housing allowances to a contingent of reservists mobilized for assignments in Europe.

The dispute centers on a contention by Army finance officials that reservists who mobilized from the U.S. for assignments abroad aren’t entitled to a basic housing allowance for their American residence and an overseas housing allowance if the Army fails to provide on-post accommodations.

For years, reservists were paid the dual allowances, since they still needed to pay rents and mortgages while deployed. But in 2016, finance officials in Wiesbaden changed their interpretation of the Joint Travel Regulation.

As a result, reservists were permitted only one allowance. The change was applied retroactively, so Army finance officials began targeting those who had received dual payments.

But the Army review board, in its initial August 2021 decision, said the service’s rationale violated federal regulations and led to “unjust actions” against reservists.

The people affected faced invasive criminal fraud probes, were denied promotions and went into debt as the service sought to recoup hundreds of thousands of dollars in allowances that had been paid.

The Army was ordered to repay seven soldiers involved in the initial lawsuit no later than October 2021 while deleting all negative findings from files and criminal databases related to the cases. But the repayments never came amid ongoing legal maneuvering by government attorneys.

With the case now ordered back to the Army board for a second time, more reservists who were treated in a similar manner can be added as plaintiffs, said attorney Patrick Hughes of the Patriots Law Group, which is handling the lawsuit.

“We are in the process of getting the word out again on that,” Hughes said. “Otherwise, the Army may get to avoid paying six-plus years of dual entitlements like it should have to all these (reserve component) members in Europe, if the (Army board) agrees that was appropriate based on the judge’s order.”

The ongoing legal wrangling revolves around the Army’s new contention that it can’t pay the reservists despite being ordered to do so.

Government lawyers are arguing that the Defense Finance and Accounting Service could not pay the reservists because of other regulations. They claim that it may only pay reserve members with dependents in the same fashion as active-duty members, through a family separation basic allowance for housing overseas.

That separation allowance can’t be paid if a reservist’s family member spends more than 90 days in the same area where the reservist has been mobilized, the Army’s attorneys argued in an August court filing.

DFAS determined that plaintiffs with dependents could be eligible for relief as intended by the Army board’s decision under the family separation allowance, the government’s lawyers said.

But to do that, DFAS would need to know where family members were during the reservists’ mobilization, which the Army board did not address.

The reservists countered that the government’s argument conflated rules that apply to active-duty personnel with those for reservists.

While active-duty soldiers are sent on permanent duty station assignments with household goods moves, reservists are generally mobilized on temporary assignments that don’t allow for the relocation of property and family members.

Judge Armando Bonilla, in his Friday ruling, appeared to concur with the plaintiff’s argument, noting that a second housing allowance can be granted when dependent relocation isn’t authorized at government expense and when the Army can’t provide assigned government quarters.

Nonetheless, the judge said the Army Board of Corrections is still the venue to resolve the matter. Bonilla gave the board 180 days to complete its review.