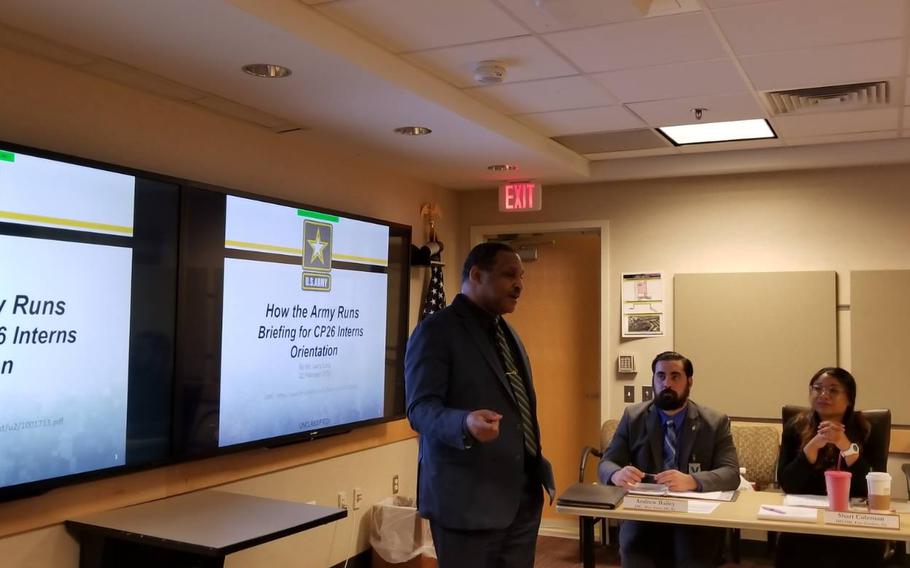 Larry Lock, the Army’s chief of compensation and entitlements, speaks during an Army orientation briefing at the Pentagon in 2019. An attorney’s court filing on behalf of Army reservists largely blames Lock for the service’s misinterpretation of regulations that denied housing benefits to reservists, and for refusing to comply with an order to repay the soldiers. (Facebook/U.S. Army)

The U.S. Army is accused in a new federal court filing of defying an order by its highest review board to repay several soldiers who were wrongfully denied half a million dollars in housing allowance benefits.

The filing also alleges that the service’s compensation chief misled a U.S. senator in an attempt to sidestep federal law.

“First and foremost, the harm is ongoing … and the Army is refusing to comply with the order of their own Secretary,” according to court papers filed Monday by Patriots Law Group on behalf of seven Army reservists.

The filing came in response to an Army request for dismissal of a lawsuit. The Army argued that the case is no longer needed because the dispute had been resolved by the Army’s Board of Corrections in August.

But to date, no repayments have been made, and other corrective measures haven’t been taken despite the board’s Oct. 26 deadline, said attorney Patrick Hughes of the Patriots Law Group.

“The Army has not demonstrated any intent to fix this,” Hughes said.

The review board ruled that the service had violated federal law in denying dual housing allowances to reservists sent to Europe on lengthy tours with no place to live on base. For the Army, the amount owed the soldiers is estimated at $500,000.

The Army said in a statement Thursday it was aware of the board’s recommendations and that the Defense Finance Accounting Service Claims Office is conducting a pay audit to ensure the soldiers are properly compensated, per the decision.

The latest court filing lays much of the blame over the mistaken interpretation of housing allowance regulations and the continued lack of compliance with the board’s order on Larry Lock, the Army’s chief of compensation and entitlements.

In light of the board’s ruling, an Army reservist who was not part of the original lawsuit, Nicholas Capozzi, sought assistance from Alaska Republican Sen. Lisa Murkowski to determine whether he was entitled to dual housing allowances during his overseas tour in Germany.

On Oct. 4, Lock responded in a letter that because “Capozzi is a member without a dependent, the board’s decision does not impact the entitlements he received while on active duty.”

But Lock’s assertion contradicted the Army board’s actual ruling, which stated that Maj. Louis Morelli, a reservist soldier without dependents, was entitled to the dual allowance.

“Mr. Lock’s response to Senator Murkowski concerning Mr. Capozzi makes clear that if Maj. Morelli were to be mobilized again to Europe, as a member without dependents, he would be denied dual entitlements,” Hughes wrote in the court filing.

The board issued seven decisions, one for each reservist in the Patriots Law Group case, and it came to the same conclusion every time: The Army erred by denying dual housing allowances and seeking recoupment of past payments.

The service was also ordered, among other things, to delete all negative findings such as letters of reprimand or files stored in Army criminal databases from the soldiers’ records.

The Army’s Criminal Investigation Division “is in the process of deleting the individuals from its records as required,” Maj. Angel Tomko, an Army spokeswoman, said in a statement Thursday.

The Army statement did not address the allegations against Lock or explain why some eligible reservists continue to be denied the dual housing allowance.

The battle over housing allowances has ramifications for potentially hundreds of other soldiers who were likely affected by the Army’s erroneous interpretation of regulations, Hughes said.

He is representing another group of reservists in a separate potential class-action case that could have millions of dollars more at stake.

It is unclear why the Army has not yet followed the order of the Board of Corrections, which acts on behalf of the secretary of the Army and is the highest level of administrative review in the service. The board’s mission is to correct errors and remove injustices from military records.