US Army moving equipment across Pacific for training 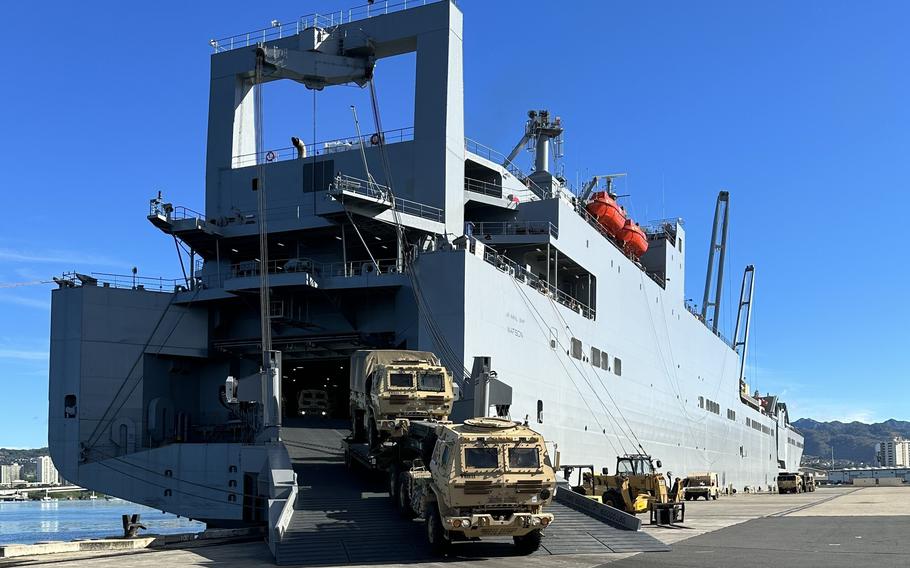 (Tribune News Service) — The Army is moving equipment across the Pacific in support of its Operation Pathways exercise to be held in Australia in 2023 as it continues to define its changing role in the region.

Last week the USNS Watson, a Navy cargo ship nearly the size of an aircraft carrier, arrived in Pearl Harbor and dropped off hundreds of vehicles that are part of an Army Prepositioned Stock, or APS. It was Watson's first trip to Hawaii, one of many firsts as the military plans for Operation Pathways and makes moves to strengthen ties with countries around the Pacific amid geopolitical tensions.

"There's multiple APSs that will be moving throughout the theater, really in support of Operation Pathways at large," said 8th Military Police Brigade commander Col. Charles Green, whose soldiers were responsible for moving vehicles and equipment onto Joint Base Pearl Harbor-Hickam for inspections.

"We're putting in hard capabilities in these countries, with our partners," said Green. "On the posture side it is establishing some infrastructure and support that if we were to have to do this in the real world, we're able to execute."

Under President Barack Obama, the military began its "Pivot to the Pacific" as American policymakers came to see the region as its top priority, but the effort was stalled by the rise of the terrorist group Islamic State and the subsequent multinational military campaign against it alongside the U.S. military's continued entanglement in the Afghan War.

But the American military's withdrawal from Afghanistan and a decreasing footprint in Iraq and Syria have freed up troops for the Army to look elsewhere.

The Watson delivered more than 500 pieces of equipment, vehicles and containers. Soldiers worked around the clock to move them. Green said, "We executed what we thought would take about five days in about three days."

Though the Navy hauled the ships to Hawaii, the Army will bring them the rest of the way with its own logistics support vessels, better known as LSVs. The Army has a fleet of about 300 active and reserve watercraft, including tugboats, ferries and floating cranes — but currently only eight LSVs.

Military strategy in the Pacific centers largely around navies and operations at sea. The Chinese navy has staked out disputed islands and reefs in the South China Sea — a critical maritime route through which more than a third of global trade transits — over its neighbors' objections.

The Marine Corps is restructuring its entire force to return to its roots as an amphibious force focused on island hopping and coastal operations as it tries to break from the legacy of the past two decades of grinding counterinsurgency operations in mountains and deserts.

With so much focus on the sea, there has been a debate within military circles about what role the U.S. Army can — or should — play in the Pacific. But at the Association of the U.S. Army's Land Forces Pacific Symposium held in Waikiki in May, U.S. Army Pacific commander Gen. Charles Flynn told attendees "even though there might be a lot of blue on that map, people have this unique tendency to live on land," and asserted that relationships between armies in the region are "the glue that binds the regional security architecture together."

Nevertheless, the Army has increasingly looked for ways to improve its maritime capabilities as the Pacific region becomes the Pentagon's top-priority theater of operations. On Wednesday, Flynn visited JBPHH to see the movement of the equipment for himself and talk to soldiers about how it fits into the Pentagon's "integrated deterrence" strategy and working closely with allies.

"General Flynn defines that as capability, posture, messaging, and in his view, when he talked to us, this hits every one of those, " said Green.

Today the Army will do an aerial survey of the staged equipment to plan ahead for when it will reach its destinations.

"You can take that overlay and you can lay that on top of a port in, say, the Philippines or Australia, and you could say, 'OK, we think that this will generally fit there,'" said Green.

But it will take time before the next leg of the journey. After the holidays the Army will work between January and April to put the equipment through agricultural inspections to make sure they're not carrying any pollen, animals or other organisms or material that could threaten ecosystems in Australia.

Green said it's an effort the Army is able to undertake in a nonemergency deployment but that "I would assume that during crisis or conflict, that would not be required."