‘A place to begin to heal’: Fort Meade opens a resiliency center for those who bear the weight of secret, stressful missions (Tribune News Service) — On one side of the Fort Meade gate, they are part of the nation’s secret-finding and -keeping apparatus. They’re on the front lines, however remotely, of global conflicts and nefarious threats.

On the other side, they are just another tired worker who stops at Royal Farms for coffee — but with the weight of knowledge to which no one else in line is privy.

One such Fort Meade worker told Tim O’Ferrall that he remembered thinking: “How are you all not screaming right now?”

“It’s a stressor,” O’Ferrall says now, with some understatement.

O’Ferrall is the general manager of the Fort Meade Alliance, a community group that supports the installation and partnered with it to create the Education and Resiliency Center that will have its grand opening Thursday. The center will serve as a hub for the wellness and mental health services available for those on the sprawling installation.

Seeking that kind of help can prove uncomfortable for some, given the clandestine, high-stakes nature of much of the work at Fort Meade — home to the National Security Agency, the U.S. Cyber Command and units of all the service branches, including the newest, the Space Command.

Some fear losing security clearances or promotions should their struggles with stress, anxiety, depression or other ailments become known. But left unaddressed, the toll from these can be heavy when borne alone, say those who have had their own struggles.

“You’re dealing with national security. You can’t just go home and talk about it,” said Ed Rothstein, a retired colonel and former Fort Meade garrison commander. “You have to keep it inside you.”

It was Rothstein, now a Carroll County commissioner, who planted the seed for the center during his term as commander, from 2011 to 2013.

“I was seeing issues like domestic violence, drug use,” Rothstein said. “There were six suicides.”

Rothstein only realized after retiring that he hadn’t taken the time to process his experiences or decompress as he hurtled from one posting to another, from Iraq to Afghanistan to the NSA. He was moody and detached, Rothstein said, and after a long conversation with a Veterans Affairs doctor, sought help from behavioral specialists and psychiatrists.

“I am very open about it because I feel so much better now,” Rothstein said. “If I can open up and talk about this, some young serviceman might think, ‘I should check this out.’”

The center is designed exactly for that. A visitor entering the newly renovated Kuhn Hall, which previously housed visiting dignitaries, can stop at a kiosk and scroll through the options for counseling, classes and other resources. There are also kiosks elsewhere on base, as well as a digital portal.

“Or, if you don’t want to talk to a machine, you can talk to a person,” O’Ferrall said.

Counselors will staff the center, to triage and steer visitors to the right services for their needs — perhaps they are having trouble sleeping, managing their finances or dealing with a recent or old trauma, or they’re new to town and looking for family support, an Alcoholics Anonymous meeting or a yoga class.

And all can be done anonymously, said Deon Viergutz, president of the Fort Meade Alliance Foundation, the alliance’s fundraising arm. “No records, no creating a file.”

“This is an attempt to break down the stigma,” he said. “You’re not walking into a hospital.” 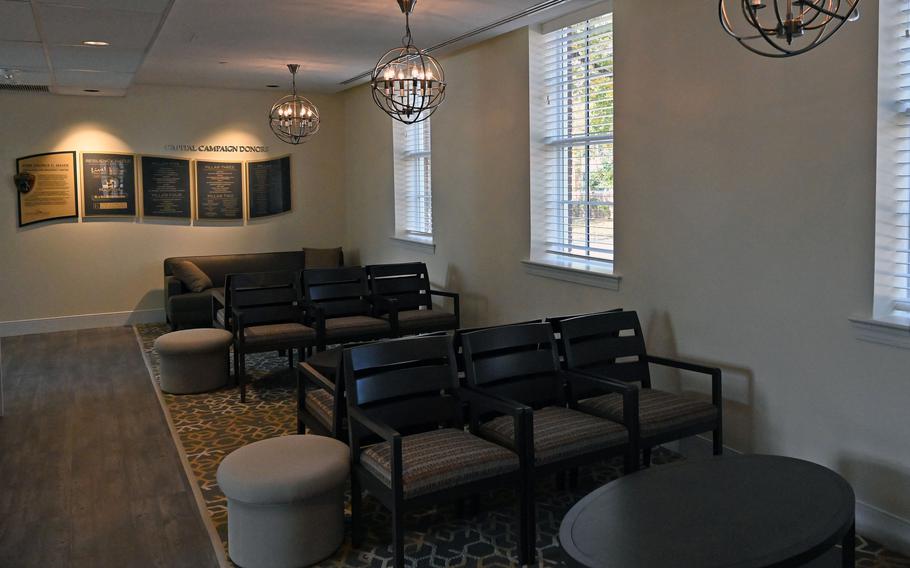 Viergutz said that there are mechanisms within units and agencies at Fort Meade where more severe mental health issues that could affect work or clearances are reported and addressed.

“Not everything rises to that level,” said Viergutz, an Army veteran who went on to become a vice president at Lockheed Martin handling cyber technologies. “This is about wellness. This really is a place to begin to heal.”

On a recent afternoon, the red-brick, three-story, 9,000-square foot building was still largely empty but for a few contractors putting together some outdoor furniture for a terrace.

Inside, a palette of gray, taupe and cream was soothing, less military-issue and more spa-like.

“We wanted it to be warm and welcoming,” O’Ferrall said, “and not to look like a government building.”

The Army had given the building to the Fort Meade Alliance to renovate, then return it for use as the resiliency center — a lengthy process that involved getting approval up and down various chains of command and passing all sorts of legal and governmental muster.

“It’s really hard to give the Army stuff,” said Chad T. Jones, a public affairs officer for the garrison.

The building had to be renovated up to current standards for disability, energy efficiency and security — the doors and windows, for example, now meet blast-resistance standards.

Meanwhile, the project ran into the usual construction challenges of recent years, from COVID to supply chain backups to trade wars, which inflated costs from $3.6 million to $5.1 million. Corporations, foundations and others, from Live! Casino Hotel to the Baltimore Orioles to M&T Bank, are thanked for their donations on a wall display and via room signs.

Some rooms were designed to be flexible, necessary given the range of the center’s offerings. Several colleges that offer courses and certification programs, for example, will have space here. Tables and chairs are on wheels to allow for different configurations, and walls can slide in to turn one large space into two smaller ones. There’s a demonstration kitchen that will be used to encourage healthier eating habits, especially among service members who live in barracks with not much more than a hot plate to cook on and numerous fast food outlets beckoning.

Carl A. Castro, who directs the Center for Innovation and Research on Veterans & Military Families at the University of Southern California, said the military has become less dismissive of mental health problems over the years.

“‘It’s not a real issue.’ Or, ‘you should be able to suck it up,’” is how Castro, a professor of social work who served more than 30 years in the Army, characterized previous attitudes.

The mental toll of serving is now at least an open topic, he said.

“If you go to any installation, folks will be talking about mental health,” Castro said. “Before it wasn’t mentioned. It was taboo.”

“Why isn‘t it integrated with primary care?” Castro said. “We still have a lot of work to do. But you don’t change a culture overnight.”

At Fort Meade, those involved in taking the resiliency center from idea to reality will gather for Thursday’s ribbon-cutting. Among the speakers will be Col. Michael A. Sapp, the current garrison commander, and the sixth since the project began.

He said he hopes the center will become a gathering place not just for those who work at the installation, but the surrounding community, where many of them live.

This summer, Sapp took command of Fort Meade, which as a longtime intelligence officer he considers “the mother ship.” After 23 years in the Army, he realized he was enrolling his oldest child in her 11th school.

“Every one of these moves has some kind of new stressor,” he said.

Sapp wants to spread the word that there’s a place to start finding help for any of a range of struggles. There’s almost too much information out there, he said, and the center can help sort through and find that “needle in the haystack.”

Communication will be key, he said.

“A year from now, if I find any person, a family member, a sailor, a Space Force guardian, a retiree, someone I see at the dining facility for Thanksgiving,” Sapp said, “and I ask, ‘Have you heard about Kuhn Hall?’ If they say ‘No,’ I didn’t do my job.”