Life after war: How this Idaho nonprofit uses outdoor adventure to help veterans 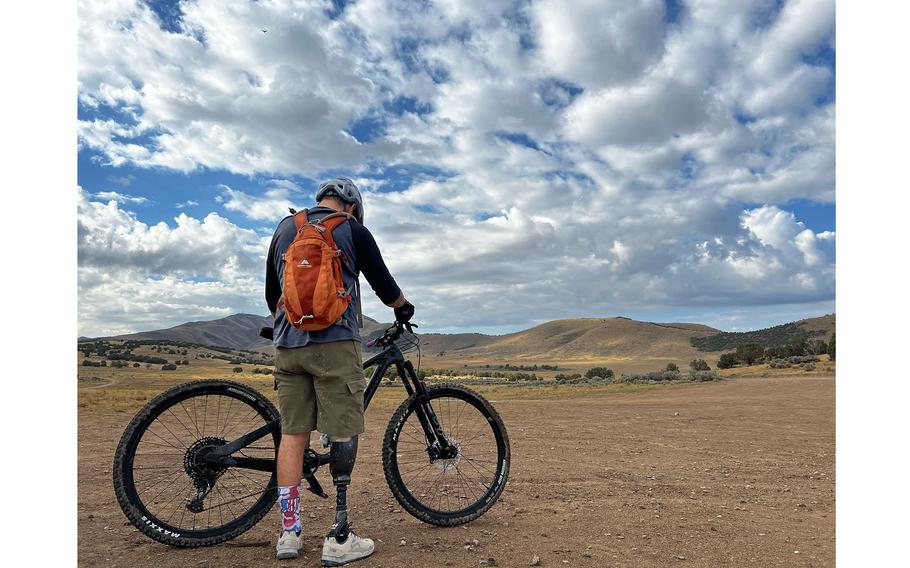 Wishes For Warriors is a veteran-run nonprofit that provides outdoor adventures and recreational therapy for combat-wounded veterans. (Wishes for Warriors/Facebook)

BOISE, Idaho (Tribune News Service) — Mike Bushfield was just a 17-year-old high school kid in upstate New York at the time of the terrorist attacks of 9/11.

He immediately signed up for Army infantry, even though he told his parents he was going to be a chaplain’s assistant, and in a matter of a couple of years, he went from a high school kid to the front lines in Iraq.

“It was a culture shock for me joining the infantry,” Bushfield told me in an interview. “I grew up pretty sheltered. My dad was a chaplain, so we didn’t watch rated-R movies or anything like that, and then I got into the infantry, and it was just eye-opening: So this is what the world is like. It was pretty wild.”

He spent 15 months in Iraq, starting in the early days of the invasion in 2003 in some of the toughest places in the country, including Samarra and Fallujah.

Bushfield finished his deployment in 2005, went into the Army National Guard then did contracting work for the military before returning to civilian life, settling in Kuna with his wife and son.

Things didn’t go well after the military. He was chronically depressed, seeing a therapist at the VA sometimes two or three times a week; was on 13 different medications; and was tipping the scales at 346.

“I had some difficulty doing everything in life,” he said. “I tried to take my life, and I was just coasting through life in a fog. And then I found Wishes For Warriors.”

Wishes For Warriors is a veteran-run nonprofit that provides outdoor adventures and recreational therapy for combat-wounded veterans.

Bryan “Bam” Marshall and his wife, Brittney, who now live in Meridian, started Wishes For Warriors in 2014 in California, where Bryan Marshall was stationed as a Marine at Camp Pendleton.

Marshall and his childhood friend Luis joined the military right out of high school in 2005 — Marshall with the Marines, Luis in the Army. Before they left, they promised each other they’d make it home and go hunting together again, just like they did growing up.

Luis never made it home. He was hit by an IED and killed in action.

After leaving the military, Marshall was on a hunting trip, and he said he felt that if he couldn’t have his boyhood friend with him, he should have a veteran there with him, experiencing the trip, the mountains, the nature, alongside him.

That’s when Brittney suggested they turn the idea into a charity, something on the side, taking combat-wounded veterans on hunting trips.

That was 2014, and Wishes For Warriors was born.

“Our goal was to get vets out doing things that they used to do, or never thought they could do after injury, to prove to them that, ‘Hey, it doesn’t matter if you’re missing this or this happened,’’’ Brittney Marshall said in a phone interview. “It could show that you could still enjoy life.”

The Marshalls moved to Idaho in 2017 and have been here since.

Bushfield learned about Wishes For Warriors at the Western Hunting Expo in Salt Lake City, where Wishes For Warriors had a booth. The group was promoting its program and upcoming events, which included a sturgeon fishing trip and long-range shooting event in Idaho. Bushfield applied and got a spot.

On that trip, he connected with a Marine who coincidentally was in the same area of Iraq at the same time when Bushfield was there.

Bushfield approached Wishes For Warriors and said he wanted to do more trips. In 2018, he did a duck hunting trip, even though he had never hunted before. Earlier this year, he hunted bison in Montana.

Bushfield found that his trips with Wishes For Warriors were able to replace his sessions at the VA.

“All the therapy I used to get going to VA I now get from hanging out with guys that have similar problems that I have,” said Bushfield, who has since lost more than 100 pounds. “I’m no longer on any medications. I take zero pills. That for me is a huge accomplishment, and I literally attribute that to getting fulfilled in therapy from other guys.”

Bushfield, who owns Grunt Work Services, a mobile detailing company, has since become a Wishes For Warriors volunteer representative, helping to spread the word about the program in Idaho.

Bushfield organized his first fundraiser as a volunteer representative, a skeet shooting competition at the Caldwell Gun Club, which was attended by 130 people and raised more than $7,000.

This year, he also worked with the Idaho National Guard as the fundraising beneficiary for the annual “Hawgsmoke” competition at Gowen Field (which Idaho’s 190th Fighter Squadron, 124th Fighter Wing, won, by the way).

“We’re growing and trying to get more veterans to hear about us,” Bushfield said. “I’m passionate about it because it changed my life.”

Veteran suicide is still a major problem in the United States.

According to the 2021 Wounded Warrior Project annual survey, there were 152,000 combat-injured veterans in the United States, and nearly one in four of these injured veterans contemplated suicide in the past 12 months.

In 2020, the most recent year for statistics, suicide was the 13th-leading cause of death among veterans overall.

Perhaps most concerning, though, suicide was the second-leading cause of death among veterans younger than 45, according to the U.S. Department of Veterans Affairs.

You can also call the Veterans Crisis Line at 800-273-8255 or go directly to their website, veteranscrisisline.net, where they also have a chat feature to talk to someone.

‘It changes your life’

Bushfield said the trips can be challenging, but they’re rewarding.

He told me about a working trip he and three other veterans took to Montana building fences on a ranch. He was worried the other veterans would be miserable and never want to do another trip because it was grueling work. But when he read the “AAR,” or “after action review,” the participants had nothing but great things to say about it, and wanted to know when they could go back.

“It changes your life, and it was literally just being in the mountains with veterans, talking and building fence,” Bushfield said.

On another trip, one veteran had initially backed out because his wife threatened to leave him if he went on the trip. He decided to go anyway.

“He gets back from the trip, and a couple of weeks go by, we didn’t hear anything from him,” Bushfield recalled. “And then he sends this really long email that was like, ‘Hey, man, I just want to say that this has changed my relationship with my wife. I am able to be present with my wife now. And she appreciates every second that I was gone because I am far more present here now that I’m back.’”

One of the challenges is getting veterans to come out of their isolation.

“I think veterans are the best in the world at isolating,” Bushfield said. “For me, I am comfortable in my garage, in my chair at home. … I might feel safe and I might be comfortable, but leaving (home), meeting a guy that I’ve never met on a random trip, it’s helping me grow and it’s helping me get over the things that are holding me back.”

“Every time I leave my home, for me, I have a mentality that I’m leaving my FOB — FOB is a forward operating base,” he said. “So every time you leave the wire (the perimeter around your base), you know you have to have boots on, you have to get everything ready, everything has to be ready to go.”

And so some guys just never leave the wire.

“What I’m learning is that if I don’t ever leave the wire, I’m not experiencing anything in life,” Bushfield said.

Wishes For Warriors has evolved from just hunting trips.

Upcoming trips include deer hunting in Alabama, goose hunting in Texas and fishing for steelhead in Kamiah, Idaho.

Wishes For Warriors pays for everything for the veterans’ trips — airfare, lodging, food and even gear for those who need it. All of it. The only contribution required is participation.

In 2020, Wishes 4 Warriors launched a recreational therapy clinic, run by a former Wishes For Warriors participant. Another former participant is the East Coast ambassador for the organization. Another representative is in Texas.

“When we started out, our bread and butter was one-on-one therapy; it was Bryan taking these guys out on the mountain, on an adventure,” Brittney Marshall said. “But what it’s turned into is these veterans who tried to escape that feeling of the military, that’s actually all they know, and what they miss is reconnecting with the guys.”

The organization is run by just eight veterans, two military spouses and one civilian.

Since its inception in 2014, the group has led more than 120 hunts and gotten more than 200 veterans back in the outdoors.

The organization has grown every year, too. Starting with serving 15 veterans in 2014, Wishes For Warriors served an estimated 877 veterans last year through its various programs.

There is a growing body of research that shows just being outdoors is beneficial for mental health.

Bushfield believes that being in nature is our natural state, so leaving the city and going out into the woods and the mountains connects us with what makes us human.

“I find that being in the outdoors lets you connect with nature,” Bushfield said. “You don’t have a cellphone half the time, you’re not constantly staring at it all of the time. The issues that you have are just left behind.”

As well, there’s a whole field of science studying adventure therapy, and I could provide studies that talk about healthy adrenaline, serotonin levels, “forest bathing” and cortisol spikes.

But Bushfield does a better job of any that I’ve read explaining why adventure therapy seems to work for veterans.

Same with the military. Outdoor adventure helps replace that piece.

“I think that adrenaline and things that make you feel as you felt again, help you remember that that part of you is not gone,” Bushfield said. “Because literally you go from 110 miles an hour every day all day while you’re deployed to zero miles an hour. … We have a joke that Wishes trips can get crazy. Well, now we took this guy going zero miles an hour and we put him on the back of a horse riding in the mountains of Montana. He’s going 110 miles an hour, and he is feeling what he felt when he was in the military.

What you can do