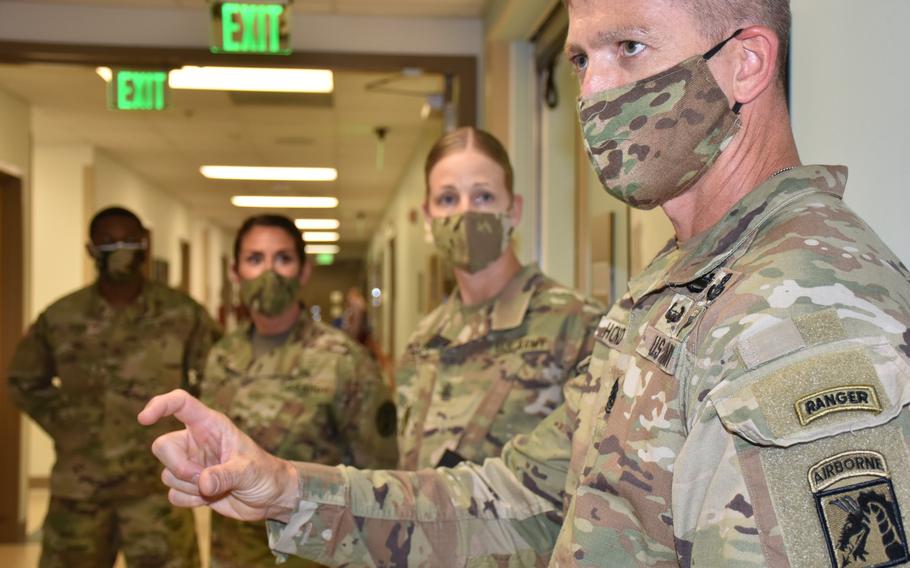 Command Sgt. Maj. Thomas Holland of the Army’s 18th Airborne Corps is pictured in June 2020 at the Womack Army Medical Center at Fort Bragg, N.C. The corps is testing a policy that would prevent soldiers from being released from in-patient mental health facilities on holidays or weekends. It is an effort to better support a soldier’s recovery effort and help prevent suicide attempts, Holland said. The policy includes a contract on what the soldier, the soldier’s leaders and the medical provider are responsible for when the soldier is released. (Twana Atkinson/U.S. Army)

The 18th Airborne Corps is testing a policy that would prevent soldiers from being released from in-patient mental health facilities on holidays or weekends, leaders of the Army unit said.

The policy is designed to better support a soldier’s recovery effort and help prevent suicide attempts, said Command Sgt. Maj. T.J. Holland, the corps’ top enlisted leader. It also includes a contract on what the soldier, the soldier’s leaders and the medical provider are responsible for when the soldier is released.

“What we've seen when we release a soldier before a weekend or holiday is they go back to the isolation area and they start revisiting those thoughts and practicing those same behaviors that brought them to the dark place before they sought help,” he said.

The policy is one of two coming to the corps that aim to make certain that soldiers who have been hospitalized for suicidal ideations are supported as they reintegrate into their daily life, Holland said.

A second requirement will have each soldier take part in a reintegration event within 24 hours of being released from a hospital. The event could be anything that the soldier enjoys doing, such as a cooking class or another activity that the person identifies as important to him or her.

“We need to find out what drives that soldier to serve and why they enjoy life. Those are the things we should seek out as far as a reintegration event,” Holland said.

The proposed policies come after the military has spent years grappling with an increasing rate of suicide deaths among its troops amid outcry from members of Congress and others. The Defense Department has spent millions of dollars in recent years on multiple efforts to attempt to understand what causes service members to harm or kill themselves. The department has taken some steps to increase troops’ access to mental health professionals, combat the longstanding stigma that seeking help was a sign of weakness and better train its troops on firearms safety, defense officials have said.

Among the efforts, the Pentagon was mandated by Congress to create an independent review committee to study the issue. The committee began work in May and is expected to produce a comprehensive report on military suicide by February.

Since 2018, the Defense Department has been required to release an annual report on suicide in the military to better understand the scope of the losses and document prevention efforts.

The latest annual report was released last week and showed the Army’s efforts to prevent suicides among its ranks stagnated last year as the other service branches saw a decline in self-inflicted deaths.

The new policies being tested by the 18th Airborne Corps will impact roughly 92,000 soldiers who are assigned to the unit at 13 installations.

“What I want to do is create the environment where the leadership acknowledges their responsibility — my responsibility — that I have to care for my soldiers,” Holland said. “I feel very passionately and strongly that we're going to impact a lot of soldiers’ lives. We're going to get into the prevention.”

Should a soldier miss an appointment and can’t be reached, Holland said the unit will use an Army policy change made in 2020 to begin efforts to locate the soldier quickly. The change was enacted alongside the December 2020 release of the Fort Hood Independent Review Committee’s report that found there were no established procedures for first-line supervisors when a soldier fails to report.

“It was apparent to the [committee] that [noncommissioned officers] had little guidance on how to handle — or even what facts should be considered — “suspicious circumstances,” according to the committee’s report.

The committee reviewed several cases for its report, including that of Sgt. Elder Fernandes, who was released from Fort Hood’s inpatient program for suicidal ideations in August 2020 and died by suicide less than a week later.

Upon release from the hospital, a member of his unit left him on the doorstep of a friend’s house, and he was never seen alive again. While the unit had made some attempts to reach Fernandes, it was 48 hours later when Army Criminal Investigation Division agents were contacted.

The Army’s missing-persons policy now focuses on bringing in law enforcement during the first 48 hours to reach soldiers who might be at risk of harming themselves.

Sgt. Maj. of the Army Michael Grinston tasked Holland in June with reviewing how to improve policy regarding the time that soldiers are released from in-patient mental health care after statistics showed the propensity for self-harm can increase during that time. Holland said he presented his plan to Grinston in August as part a monthly meeting of the Army’s top command sergeants major to discuss prevention of harmful behaviors.

As the corps tests these changes, Grinston said he’s watching to see if it reduces suicides and improves the environment for soldiers.

“That’s the benefit of our monthly meetings on prevention: we can try something and if it works, try it somewhere else. Then we really have a solid case for Army implementation,” Grinston said. To get the policy on release dates to move forward, Holland said he’s coordinated with Womack Army Medical Center at Fort Bragg, N.C., and the Defense Health Agency, which manages military hospitals. For soldiers who are treated at off-base facilities, Womack has agreed to pay for their stay to be extended should a release date fall before a weekend or holiday, he said.

Craig Bryan is a clinical psychologist and Air Force veteran whose book “Rethinking Suicide: Why Prevention Fails and How We Can Do Better” has been used by senior Army leaders to help shape changes in prevention efforts. He said the time after someone is discharged from a hospital is a crucial time for the person’s recovery.

“In the month immediately following inpatient discharge, it's actually the highest risk period for suicide for anyone engaged in the health care system. The risk of suicide is anywhere from 100 to 300 times higher in the first month post discharge. The first seven days matter the most,” Bryan told a conference of commander sergeants major during a June meeting of the Army’s top enlisted personnel.

At the time that a soldier is released from a hospital, Holland said there now will be a contract signed that outlines responsibility to make certain that “every element of support is transferred” with the soldier. Follow-up appointments with their care provider will be scheduled within 24 hours of leaving a hospital and again at about the 10-day mark.

Fort Campbell, Ky., which is under the 18th Airborne Corps’ command, already has a policy in place not to release soldiers before a holiday or weekend. The reintegration event policy will be new for other units within the corps. For that, Holland said he had to ensure units can access existing funding through the Army’s recreation programs.

The corps now has two soldiers receiving care at in-patient facilities and Holland said they will test the policy changes with these soldiers as they are released.

From here, Grinston said he’s watching for a “positive effect” to determine how and when to implement the policies across the entire Army.

If you or someone you know is experiencing thoughts of suicide, dial 988 and then press 1 for the military and veteran crisis line, or text 838255.