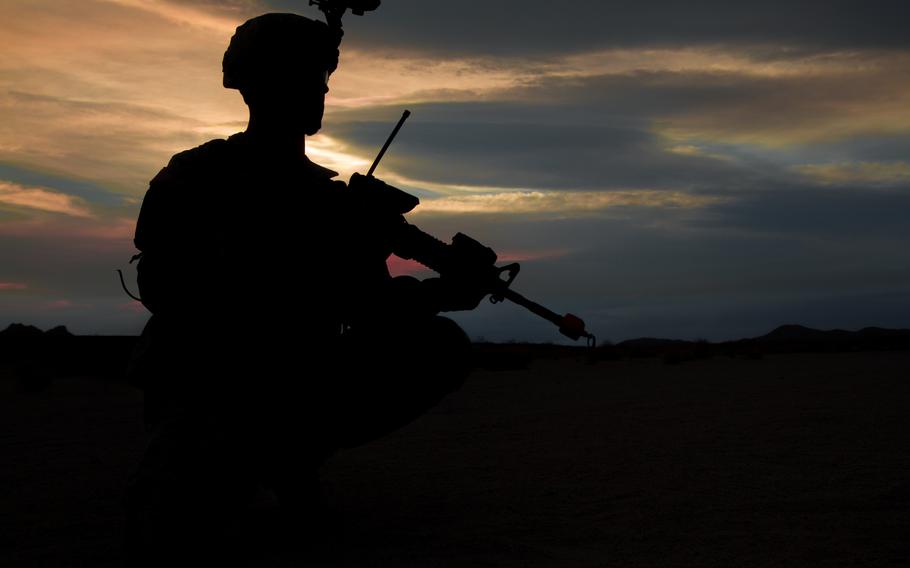 A silhouette of a service member training in May 2013 at Fort Irwin, Calif. (David N. Beckstrom/U.S. Army)

WASHINGTON – National Guard leaders said Friday that they are encouraged by the downward trajectory in the past year of suicides within the ranks, but there’s room for improvement to help troubled service members through difficult times and steer them away from thoughts of harming themselves.

The remarks from the Guard officials came a day after the Defense Department issued its annual suicide report for last year, which showed an overall decline of 63 suicide deaths among service members from 2020 to 2021. In the National Guard, there were four fewer suicides, according to the data.

However, the number of suicides in the National Guard was higher in 2021 when compared to 2019.

“We are committed to reducing the number of suicides out there,” Army Maj. Gen. Eric Little told reporters Friday. “Because one is too many.”

There were 117 suicides in the National Guard in 2021, which accounted for more than 20% of all military suicides, according to the annual report. Twenty-six out of every 100,000 Guard members took their lives last year, the report noted, which was a slight decline from 27 in 2020 but higher than the 21 deaths in 2019.

The Pentagon report showed suicides in the National Guard have fluctuated in the past decade. Most years showed an increase over the previous year. Only twice did suicides decrease -- in 2014 and 2019 -- when the rate dipped below 20 per 100,000 members.

According to the data, 93% of the suicides in the National Guard involved men, while just 7% involved women. By age, members between 20 and 24 years old accounted for the most suicides – 37% -- followed by the 30-34, 25-29 and 35-39 age groups. Eighty-five percent of the suicides last year were committed by enlisted National Guard personnel.

Defense Secretary Lloyd Austin and other Pentagon officials said they were cautiously optimistic about the suicide figures after the report’s release Thursday. But despite suicides declining in 2021, they acknowledged military suicides have still been on an upward trend in the past decade.

For the National Guard, the data does not offer as clear a trend because the suicide rate is roughly the same in 2011 and 2021, with fluctuations in between. Such an up-and-down pattern makes it more difficult to identify root causes and determine which efforts are effective, Little said.

Additionally, a Pentagon study three years ago found the National Guard’s suicide rate was outclimbing those among active-duty members and reservists. At the time, the Guard’s rate was 31 per 100,000 – its highest mark in the 2010s.

Little said Friday that the uneven data in the past decade is a challenge to interpret. But he said the Guard thinks it’s on the right track and has taken several steps to lower the suicide risk. Some of the most effective moves, he said, will be eliminating the negative stigmas that surround mental health treatment in the military, bringing in more mental health specialists and creating a culture of lethal means safety.

Adding extra safety layers to lethal means, or methods by which members attempt suicide, would allow for precious extra time to re-evaluate a person’s situation or consider other alternatives to harming oneself, Little said.

For example, he said, a gun lock could make the difference between life and death for a suicidal member of the military because it could give them an extra few seconds to weigh alternatives. In fact, he said the National Guard is considering giving members gun locks at no charge to mitigate suicide risks.

Little also said the National Guard also expects a new preventative Pentagon workforce – announced by Austin on Thursday -- to make a measurable difference. That workforce, Austin said, will work on an “unprecedented scale” and will bring about 2,000 new mental health professionals to the department by next year.

“We recognize we have more work to do,” Austin said in a statement. “Every death by suicide is a tragedy that impacts our people, our military units, and our readiness.

“Mental health is health – period. It's on all of us to end the stigma of asking for help and support when we or someone we know is feeling distressed, anxious, or isolated.”

The National Guard also must deal with one problem that active-duty troops and reservists do not – changing from military to civilian life so frequently. Because this also means that Guard members must alternate regularly between military and civilian health care, it can often be difficult for them to know where to turn for help.

“That does create a problem,” Little said, noting the Guard has an initiative focused on simplifying the process and providing a more constant health care presence for troubled members. “That is not a quick fix.”

In recent years, the Defense Department has invested millions of dollars in efforts to identify factors that lead to suicide or self-harm. Congress has also ordered the Pentagon to conduct an independent committee review of military suicides. That panel began work in May and is expected to issue a final assessment in February.

The National Guard already offers multiple resources intended to steer members away from harming themselves. They include a national hotline, a veterans crisis line and a comprehensive set of links on its website to health providers and specialists available to Guard members. The site also tells success stories from service members who sought treatment for mental health-related issues.

Studies have been done in recent years to seek out the reasons why military members choose suicide. One analysis from the Association for Behavioral and Cognitive Therapies said the top reason given by one group of troops who attempted suicide was intense emotional distress. Other reasons, the study found, include relationship problems, financial stress, and legal or disciplinary problems.

A separate study last year by the Watson Institute for International and Public Affairs at Brown University in Rhode Island found service members are four times more likely to die by suicide than in combat – and that military suicides have increased substantially since the 9/11 terrorist attacks, which were followed by years of war in Iraq and Afghanistan.

The Watson Institute study listed several other factors that drive some service members to attempt suicide, such as post-traumatic stress disorder, difficulty reacclimating to civilian life and trouble adapting to the rigid and demanding culture within the military. Also, the study said, service members are three times as likely to attempt suicide if they own a firearm.

USA Today reported last year that some of the military bases with the highest suicide rates also have some of the highest sexual assault rates, which could be another factor in suicide data.

"In 2021, we took concrete steps to support service members … by fostering a supportive environment and quality of life, addressing stigma as a barrier to help-seeking, and promoting a culture of lethal means safety,” Elizabeth Foster, executive director of the Pentagon’s Office of Force Resiliency, said in a statement Thursday. “We are continuing to expand those efforts in 2022.”

So far in 2022, Little said, suicides in the military are happening at a pace that’s lower than 2021. However, he noted November and December are still to come, which are months that typically see more suicides.

“This is human life we are talking about,” Little said.