The Republic of Korea-United States Combined Forces Command now resides at Camp Humphreys, Pyeongtaek, after 44 years at Yongsan Garrison in Seoul. Republic of Korea is the official name for South Korea.

Humphreys, the largest U.S. military base overseas, now serves as the headquarters for U.S. Forces Korea, U.N. Command and the Combined Forces Command. Roughly 28,500 U.S. troops are stationed in South Korea, the majority of them at Humphreys.

USFK commander Gen. Paul LaCamera and Defense Minister Lee Jong-sup during a ceremony at the new headquarters welcomed soldiers from both countries and thanked them for their help in maintaining the South Korea-U.S. alliance. 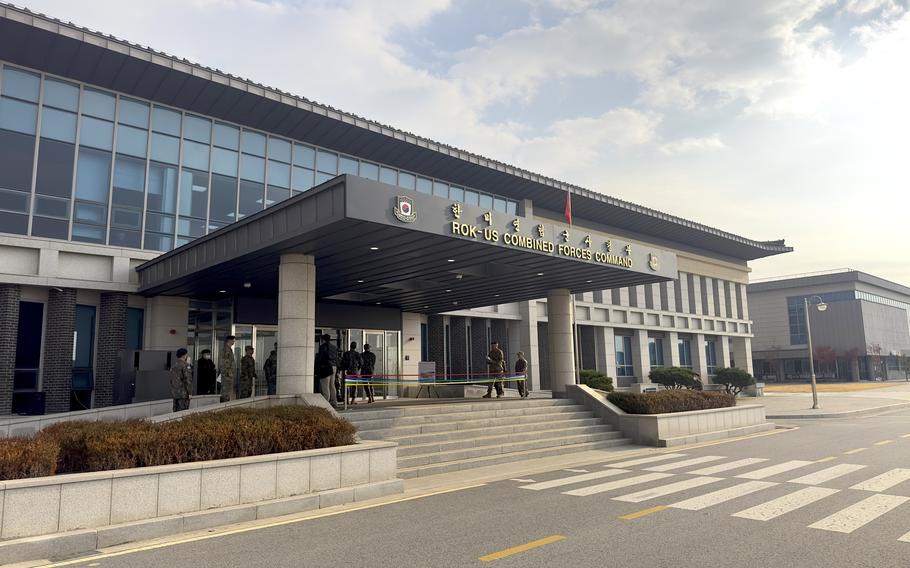 Since its creation in 1978, the Combined Forces Command coordinates the defense of South Korea with troops from Seoul and Washington. The command has operational control of over 700,000 active-duty U.S. and South Korean troops.

The move to Humphreys will “contribute to enhanced combined operational capabilities” and strengthen the “combined defense posture” of the U.S. and South Korea, according to Defense Department news release in 2021. The Defense Department and South Korea’s Ministry of National Defense officially began moving the Combined Forces Command from Yongsan to Humphreys in 2019.

South Korea paid the lion’s share of the nearly $10.8 billion cost to expand Camp Humphreys from an airfield to the equivalent of a small town, Gen. Vincent Brooks, former USFK commander, said in 2018.

LaCamera, whose role as USFK commander puts him in charge of the U.N. Command and the Combined Forces Command, likened the relocation project to “moving of a mountain” during a speech at the headquarters.

“While our addresses changed, our pledge to defend you and maintain your trust is forefront in our minds,” LaCamera said. “While the scenery, seasons, people and locations may have changed, what has not changed is the pride to serve in the land of the morning calm.”

Lee said the Combined Forces Command’s move was a “historic moment” and that its new location evokes for him as the country’s defense minister a “wide array of emotions.” He previously served as a staff officer at Yongsan.

“Opening the Pyeongtaek-era of the [Combined Forces Command] in the face of advanced North Korean threats, conveys a big significance,” Lee said in his speech. “Staff that worked separately in Yongsan and Pyeongtaek for years can now work shoulder to shoulder yielding a firmer cooperation system between [South Korea] and United States.”

Through the Combined Forces Command’s efforts, South Korea “was able to develop into a successful liberal democracy and an economic powerhouse,” Lee said.

Lee met Defense Secretary Lloyd Austin on Nov. 3 in Washington, where the two reaffirmed “the robustness” of their military alliance, Lee said at Humphreys. The Combined Forces Command is evidence of that pact, he said.

“We explicitly made clear that any attempt of nuclear attack by North Korea will result in the end of the Kim regime,” Lee said, referring to North Korean leader Kim Jong Un.

North Korea has fired over 65 missiles in 31 rounds of testing so far this year, a record. The communist regime has also fully prepared to conduct its first nuclear test since 2017, according to U.S. and South Korean officials.

Despite provocations by North Korea and preparations for combat by the U.S. and South Korea, “we pray for peace,” LaCamera said.

“Our love of peace, freedom and security has not changed,” he said. “It has only gotten stronger.”