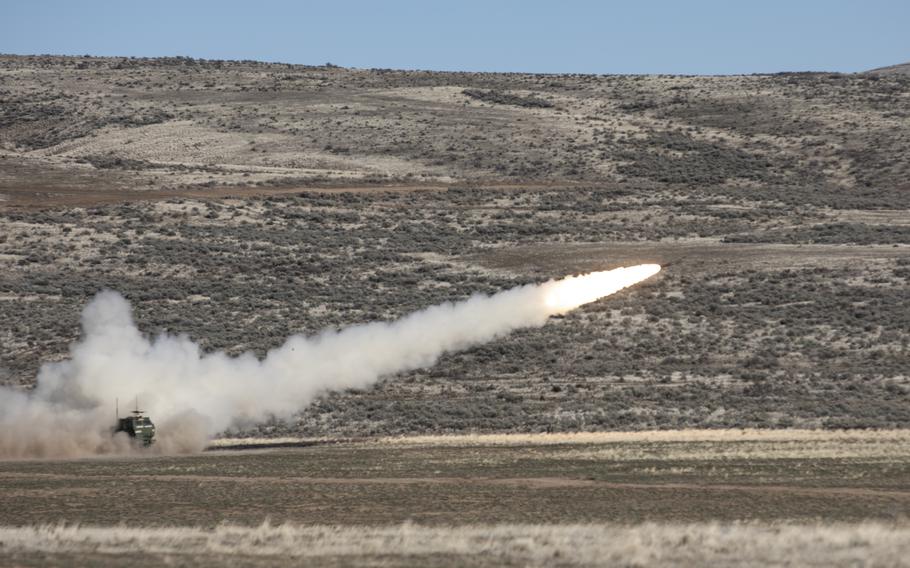 YAKIMA TRAINING CENTER, Wash. (Tribune News Service) — By the time the three soldiers stepped out of the HIMARS — High Mobility Artillery Rocket System — they operate, they had been at work for more than 24 hours straight.

After waking in the middle of the night the day before at Joint Base Lewis-McChord near Tacoma, they had flown with the HIMARS — essentially a rocket or missile launcher mounted on a 5-ton truck — and deployed at the Yakima Training Center to test their vehicle and themselves.

"It's been tiring," Sgt. Anthony Phalon said. "But you get used to it, especially if you've done it for a long time."

They spent hours cooped up in the truck's cab, conducting maneuvers with their unit — the 1st Battalion, 94th Field Artillery Regiment — simulating combat against an opponent with similar weapons capabilities.

"What makes (1st Battalion, 94th Field Artillery Regiment) more unique is the rigorous training that we do," said the battery commander, Capt. Trevor Breitenbach. "They're put through the worst possible situation we could give them."

Despite the long hours, the crew's spirits were high. A few minutes later, they conducted a live fire test, sending rockets soaring into the sky. The test was the result of months of work and preparation from the battalion.

"Our soldiers have worked tirelessly over the last 11 months to really prepare for what is this culminating event out here at the YTC," said Lt. Col. Grady Lowe, the battalion's commander. "They face a wide, opposing force that replicates the threats that an adversary would have in a real-world conflict. It culminates in them conducting a live fire at the platoon and battery level."

The HIMARS has been used in real-world conflicts. The U.S. has been supplying the weapon to Ukraine, where it has been used to attack Russian supply lines and logistics centers. Lowe said that it was also used in conflicts in Iraq, Afghanistan and Syria.

The HIMARS is one of the U.S. military's premier weapons systems, Lowe added, due to its maneuverability and range. It can reach about 60 miles with rockets or almost 190 miles with missiles and can launch and change locations in roughly five minutes, Breitenbach said.

That range is one of the reasons that the HIMARS is tested at YTC. At Joint Base Lewis-McChord, there simply is not enough room to conduct live-fire trainings. At YTC, the U.S. Army can safely use test rockets with a reduced range.

Rockets cost about $100,000 per launch, according to Al Jazeera. Trainings at YTC used test rockets, though. While the U.S. government has promised more HIMARS for Ukraine, the units tested at YTC were for U.S. military use.

The 1st Battalion, 94th Field Artillery Regiment, is regularly deployed on training exercises with countries in the Indo-Pacific region — like Indonesia or the Philippines — and is ready to be deployed throughout the Pacific, if necessary.

Jasper Kenzo Sundeen's reporting for the Yakima Herald-Republic is possible with support from Report for America and community members through the Yakima Valley Community Fund.