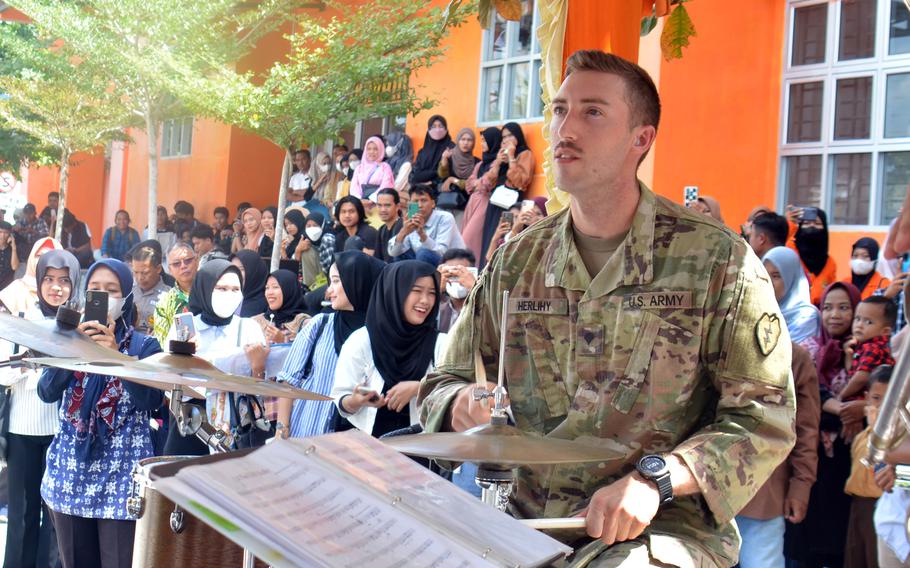 BATURAJA, Indonesia – American soldiers training on Sumatra this month are getting the Justin Bieber treatment with locals mobbing them for photographs outside training areas.

Hundreds of students showed up to a concert by the 25th Infantry Division’s Tropic Lightning Band at Baturaja University on Thursday.

The band is in Indonesia with another 2,000 U.S. troops participating in this month’s Super Garuda Shield exercise alongside 2,000 Indonesian service members.

A student drum band kicked off the concert with some impressive marching and baton twirling before seven American soldiers took the stage and played hits by Taylor Swift, Macklemore and Michael Jackson. They also performed an Indonesian song called “Sikok Bagi Duo.”

Before and after the performance, students, teachers and parents mobbed the Tropic Lightning members, and civil affairs soldiers asking to take photographs with them.

Agribusiness student and university band conductor Dewi Anggraeni, 21, who marched in a bright orange uniform, said she and her classmates were excited to see the soldiers. 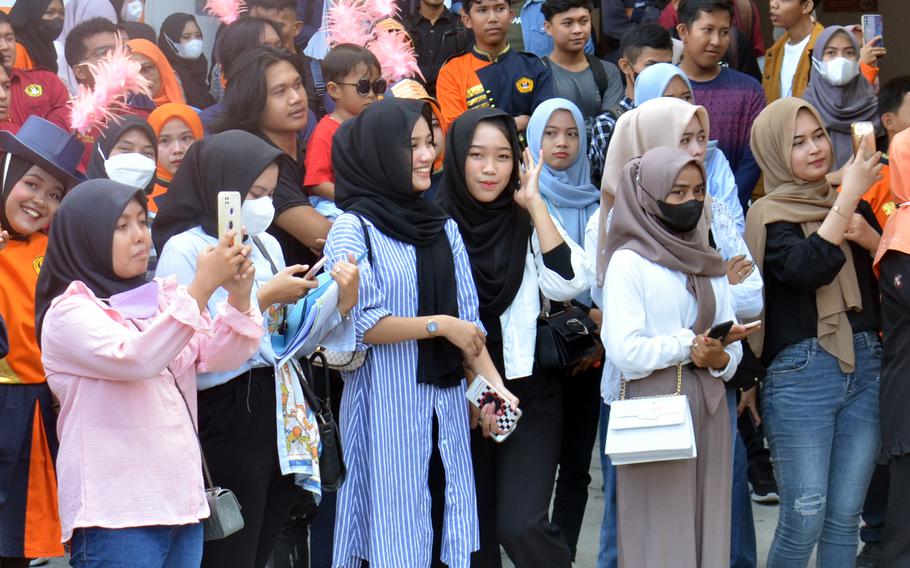 “We are very happy because the U.S. Army is the first foreign marching band that has come to the university,” she said.

Students spent a week rehearsing for the performance, she said.

American singers such as Ariana Grande and Bruno Mars are popular with youngsters in Baturaja but Anggraeni said she prefers traditional Indonesian music.

One of the soldiers who watched the show was Staff Sgt. Kevin Wilson, 36, of Colorado Springs, Colo., who works for the Army’s Civil Affairs and Psychological Operations Command.

“They don’t ask a lot of questions, but they want to take a lot of photos,” he said between posing for snaps with the students. “It’s really heartwarming to see that enthusiasm.”

The crowd’s response means performing in Baturaja felt like being in a hit band back in the United States, said trombone player Sgt. David Weinroth, 29, of Boca Raton, Fla.

Huge crowds turned up for Tropic Lightning shows during the exercise, he said, adding that several thousand people attended a performance in a local park earlier in the week.

What would he tell other troops who might train in Indonesia?

“Everybody is so excited to have us here,” he said. “You are guaranteed to have a wonderful, welcoming time.” U.S. soldiers pose with Indonesian locals in front of their High Mobility Artillery Rocket System on the island of Sumatra, Tuesday, Aug. 9, 2022. (Seth Robson/Stars and Stripes)

U.S. troops attracted interest even when they were doing routine things. A group of soldiers driving a High Mobility Artillery Rocket System on Tuesday from Palembang to Baturaja were hit up by fellow motorists seeking photos when they stopped to eat at a rest area.

More than 87% of Indonesia’s 275 million people are Muslim, making it home to the world’s largest Muslim population.

It has fought a decades-long war against Islamic extremists, including the terrorist group Jemaah Islamiyah, whose members carried out the October 2002 Bali bombings that killed 202 people, including 88 Australians and 23 Britons.

Indonesia’s national assembly toughened its anti-terrorism law in 2018 after a surge in local militancy and an Islamic State bombing that killed 30 people, according to Reuters.

The U.S. Army has ample experience working in the Islamic world in recent years.

The popularity of American soldiers with locals shows the “power of goodness” that they bring with them, he said during a break in training at Baturaja on Wednesday.

“Our soldiers are our credentials,” Smith said.