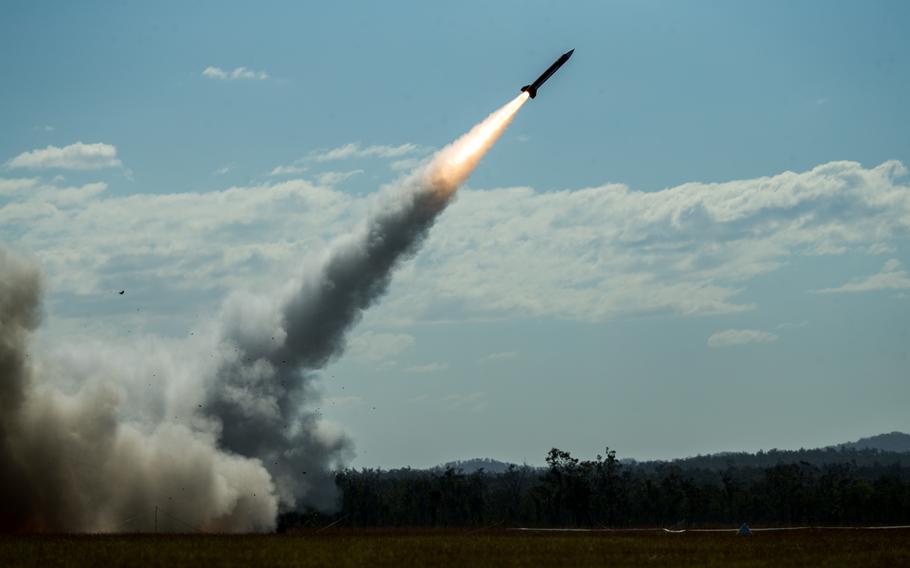 The U.S. Army is planning its first Patriot missile air-defense exercise on Palau amid efforts by China to woo other Pacific island nations with offers of economic and security cooperation.

Okinawa-based soldiers from 1st Battalion, 1st Air Defense Artillery Battalion are expected to fire the Patriot during a June 15 drill, Capt. Nicholas Chopp, a spokesman for the 94th Air and Missile Defense Command at Joint Base Pearl Harbor-Hickam, Hawaii, told Stars and Stripes by phone Wednesday.

“It’s going to be the first time we have done [a Patriot live-fire drill] on Palau,” he said. “And it’s the second one west of the International Date Line.”

Palau, one of a handful of nations that recognize Taiwan as independent of China, was excluded from Beijing’s recent offer of economic and security assistance to 10 Pacific island nations, including nearby Micronesia, The Associated Press reported Saturday.

Chinese outreach to small states in the region, which included a security pact signed with the Solomon Islands in April, has alarmed U.S. allies and partners such as Australia and New Zealand.

This month’s exercise in Palau has been in the works for more than a year and isn’t a response to China’s diplomatic moves, Chopp said.

The Army is sending a pair of Patriot launchers as well as radar and command and control systems and an unspecified number of soldiers to Palau for the exercise, he said.

Patriot Advanced Capability-2 missiles can travel up to 60 miles and reach as high as 20 miles, according to the Missile Defense Agency.

Palau has been involved in other U.S. exercises, including Operation Christmas Drop in December, an annual humanitarian assistance exercise involving the 374th Airlift Wing out of Yokota Air Base, Japan.

In December 2020, following a visit by then-Defense Secretary Mark Esper, Palauan President Tommy Remengesau Jr. proposed building joint-use military facilities in his country, which the U.S. could use as needed.

The Army has moved its Patriot batteries around the Pacific frequently in the past year.

In March, a U.S. Navy hovercraft delivered one of the surface-to-air systems to a Philippine beach for the first time during amphibious drills by U.S. and Philippine troops.

On Guam in September and November, a theoretical Patriot battery was incorporated into air-defense tests involving a Terminal High Altitude Area Defense, or THAAD, battery and an Iron Dome system brought from Texas by the 2nd Battalion, 43rd Air Defense Artillery Regiment.