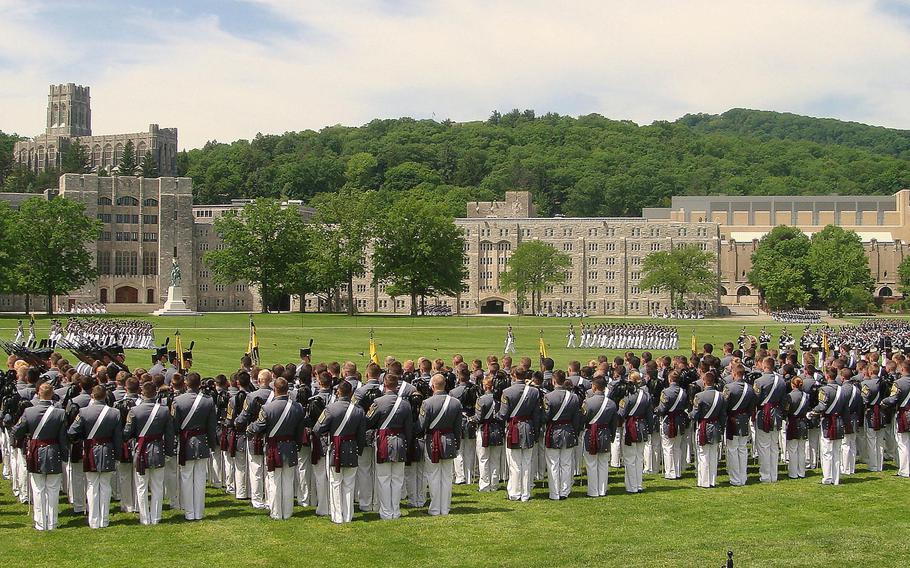 A ceremonial parade at the U.S. Military Academy at West Point. According to reports on Friday, March 11, 2022, six college students who overdosed on fentanyl-laced cocaine while on spring break in Florida were football players at West Point. (Dreamstime)

WILTON MANORS, Fla. (Tribune News Service) — The six college students who overdosed on fentanyl-laced cocaine Thursday in Wilton Manors have been identified as football players at the U.S. Military Academy at West Point.

They were in town for spring break, renting a house in Wilton Manors that would become the scene of a desperate attempt to save lives.

After using the drug, at least two cadets went immediately into cardiac arrest. Two students who hadn't taken the drug tried to give their friend mouth-to-mouth and received enough fentanyl that way to suffer overdoses themselves.

West Point issued a statement Friday afternoon acknowledging what happened and saying the academy was looking into it.

"The U.S. Military Academy is aware of the situation involving West Point cadets, which occurred Thursday night in Wilton Manors, FL," said a statement from the academy's public affairs office. "The incident is currently under investigation and no other details are available at this time."

Fentanyl, commonly used by dealers to make batches of heroin or cocaine go further, is a killer that accounts for the vast majority of accidental overdose deaths in Broward County. A 2017 Florida law allows drug dealers to face murder charges if a fentanyl sale led to an overdose.

Four of the students were taken to Broward Health Medical Center in Fort Lauderdale, while the other two were taken to Holy Cross Health. By Friday one person had been released, two remain in critical condition and on ventilators, and three are in stable condition, according to police.

A seventh person, a woman, was also later taken to the hospital and treated. Her condition, and whether she had also overdosed, is unknown.

The house on Northwest 29th Court stands in a quiet neighborhood of older residents and families.

One resident who wanted to be identified only as G.T. said he didn't see much on Thursday.

"I came out and a couple of dudes were laying out there," he said, pointing to an area in front of the rental house where he said the two men were unconscious.

Spring break in South Florida draws hundreds of college-age students to its many beaches each year, which typically runs from March 4 to about April 3 depending on the schools.

With the episode happening shortly into spring break, Fort Lauderdale Fire-Rescue spokesman Stephen Gollan said there's a concern that throughout the break, things could become "much worse" if laced drugs are spreading in the area.

"This is a great concern because you have a drug that's laced with unknown substance here, and I mean, it's just the beginning of spring break," Gollan said.

Two neighbors who live on Northwest 29th Court said several residents in the area have consistently complained to the rental's management company and city officials about excessive noise, parties and other issues at the house where the college students were staying.

The neighbors, who did not want to be named for privacy and safety reasons, said police were called to the house the previous night, and the group had been staying there for at least a few days.

One neighbor said the home sleeps 10 people and has a pool in the backyard. The home is routinely booked, but holiday weekends and spring break tend to see the party crowds, the neighbor said.

Other neighbors said the rental house isn't a problem.

Dana Fumosa, who lives next door, said the renters are usually respectful.

"There are a couple of late nights out in the pool," he said, "but we try to be forgiving because they're kids."

The vast majority of overdose deaths in Broward County involve fentanyl, and the numbers have been growing, according to the Broward Medical Examiner's Office.

"The combination of fentanyl and cocaine is particularly dangerous," said Dr. Daniel Bober, chief of psychiatry, Memorial Healthcare System, the south Broward hospital system that's seen an increase in opioid overdoses. "It's also called a speedball. Speedball is dangerous because it allows users to get the euphoria and the rush of using cocaine without the sedative effects of opioids."

"The cocaine causes the heart rate to increase, but the opioids tell the brain to slow down breathing. So what you get eventually is pulmonary edema, lack of oxygen to the brain and death."

Dealers use fentanyl as a cheap way to stretch their quantity of other drugs, such as heroin or cocaine.

"They may have less heroin so they use fentanyl to give people the same high," he said. "So it's simple economics: They have less of a product so they cut it with fentanyl. But they're playing with people's lives because fentanyl is at least 100 times stronger than morphine. It has the ability to tell the brain to stop breathing, which is why people die when they use fentanyl."