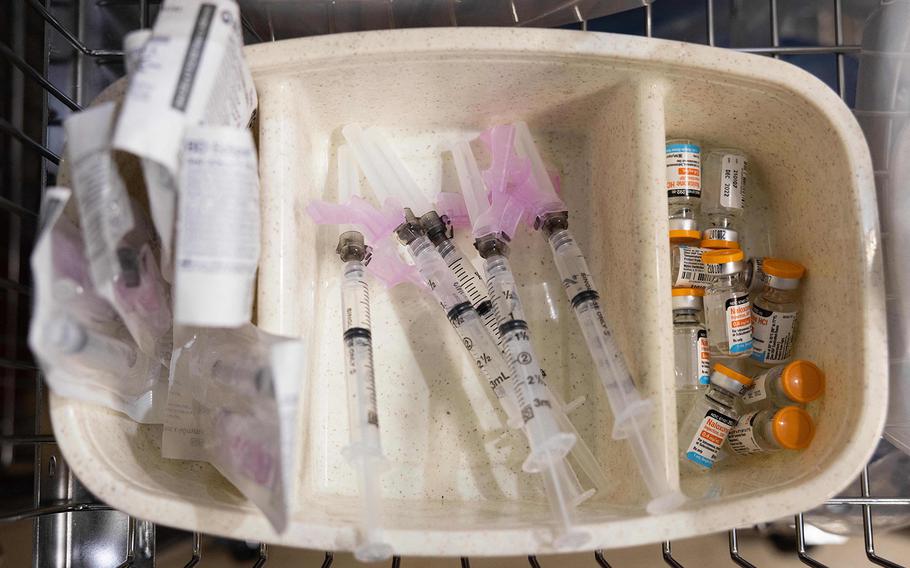 Syringes and vials of Naloxone are seen on Nov. 30, 2021, during a media tour of the supervised drug injection site OnPoint, in New York. (Yuki Iwamura/AFP via Getty Images/TNS)

(Tribune News Service) — Overdose deaths linked to synthetic opioids like fentanyl tripled among teenagers and went up five times among Black teens in the past two years, according to provisional data from the Centers for Disease Control and Prevention.

The nonprofit group Families Against Fentanyl compiled the data from the CDC, which said 2021 figures are incomplete because drug overdose deaths have a six-month lag in reporting time. Margaret Warner, from the CDC’s National Center for Health Statistics, said, given the spike in drug use during the pandemic, it’s likely the 2021 death count will only rise.

Opioid use has gripped the United States for two decades, and synthetic opioids, like fentanyl, are the driving force behind overdose deaths over the past few years. Teenagers, especially Black teens, are being especially hard hit.

At a hearing this week of the Senate Finance Committee on youth mental health during the pandemic, Idaho Republican Mike Crapo remarked that there has been a “staggering rise” in teenage overdose deaths.

Roneet Lev, an emergency room physician at Scripps Mercy Hospital in San Diego, California, said the provisional data confirms what she’s been seeing. Most, if not all, of the cases she’s seen in teens are accidental overdoses. She recently saw a 14-year-old die from fentanyl.

“The problem is both supply and demand,” she said. “There’s already a lot of fentanyl coming into our market and now we have a pandemic where people are isolated and not working, or not in school. These teenagers probably don’t have a substance use disorder, they’re experimenting, making a bad choice, and they end up dead.”

Fentanyl is 100 times more potent than morphine and 50 times stronger than heroin. It’s becoming increasingly common for fentanyl to be added into other drugs, cutting costs and making them more addictive – and more dangerous. Users often don’t know their drugs contain fentanyl.

“The risk with fentanyl isn’t just addiction or other side effects—it’s simply death,” said Michael Barnett, a professor at Harvard’s T.H. Chan School of Public Health.

So far, there have been few studies published about fentanyl, or overdose deaths, focused specifically on Black teenagers although teenage fatalities are on par with trends in Black adults.

As recently as 2015, Black men were less likely to die from drug overdoses than White or Indigenous men. Since then, the death rate among Black men has more than tripled, according to the Pew Research Center. The rate at which overdose deaths have increased among Black men far outpaces any other racial group.

“This is the same story that plays out for almost every other major health disparity that emerges between racial communities,” Harvard’s Barnett said. “And COVID-19 has kind of blown it apart and just magnified what was already happening.”

“We know that Black populations are particularly underserved when it comes to mental health services and addiction services,” he added. “So there’s less economic, clinical, social resilience to be able to push back against more of these drugs coming to that community.”

On Thursday, the CDC proposed an updated guidance with regard to how doctors prescribe opioids for people with chronic pain. And cities across the U.S. have sought innovative approaches to combat the epidemic.

Black New Yorkers had the highest rate of overdose deaths of any racial or ethnic group in 2020, according to the city’s Department of Health Epi Data Brief. The Bronx led in fatalities based on borough, followed by Staten Island. In November, New York became the first U.S. city to open authorized injection sites for drug users—a move that as of January had helped avert over 100 overdose deaths, the organization told NY1.