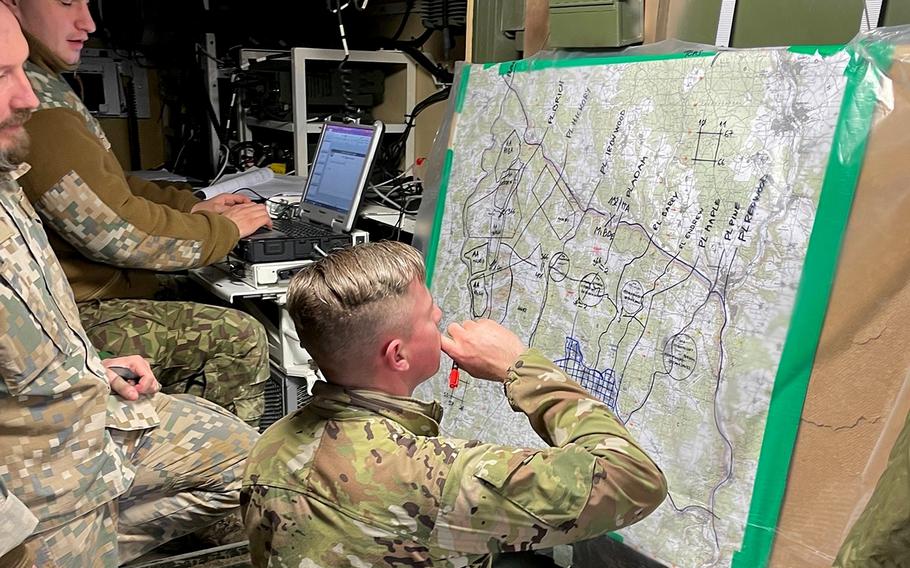 HOHENFELS, Germany — If tiny Latvia’s single active army brigade ever came under attack by Russian forces, its task would be keeping them on their heels while staying alive long enough for allies to send reinforcements, the brigade commander said.

“It’s not like 1945, when we were on our own,” said Col. Sandris Gaugers, referring to a time when his country was under Soviet occupation and lacked the protection that comes with its NATO member status.

Now, a new U.S. Army mission in Europe is helping the militaries of Latvia and other countries anxious about Russian aggression prepare for their own worst-case scenarios.

The 4th Security Force Assistance Brigade, which was set up to support a broader Army shift in how the service partners with other militaries around the world, dispatched its first advisers to Europe in October.

“The relevance of this organization in the current security climate in Europe is self-evident,” said Col. Robert Born, commander of the Fort Carson, Colo.-based 4th SFAB. 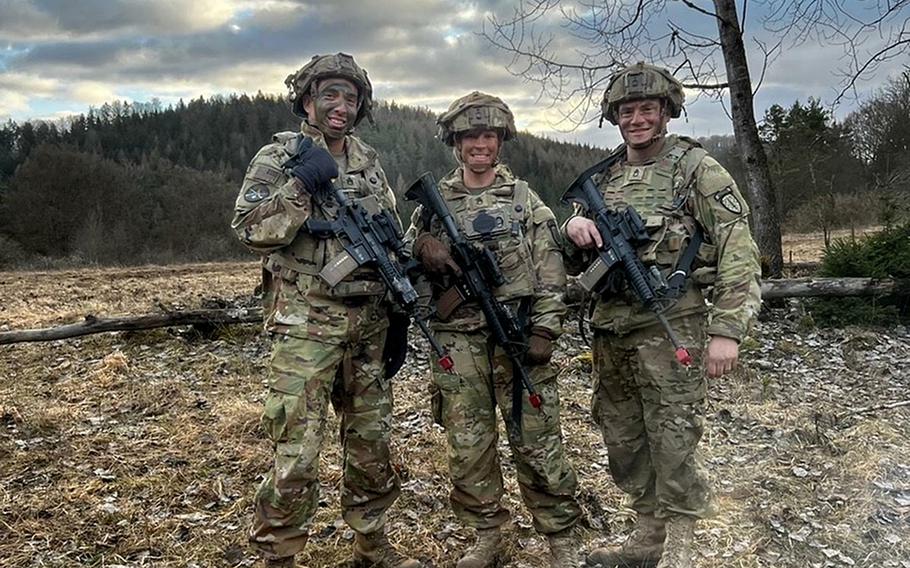 A buildup of an estimated 130,000 Russian soldiers and advanced weaponry near Ukraine’s northern, eastern and southern borders is stoking fears of another war on the Continent.

In Latvia, Georgia, North Macedonia, Poland and Romania, the specially trained U.S. soldiers are the first of what is to be a continuous series of six-month rotations.

The aim is to have the U.S advisers develop a deeper connection with foreign militaries than they would form through conventional training methods, which tend to be more episodic. The SFAB contingent is working with the Latvians in their own country.

“It’s all about having (American soldiers) literally embedded. It speeds up the process,” Gaugers said in an interview earlier this month in Hohenfels, where his troops played a main role in the U.S. Army’s recent Allied Spirit exercise.

Gaugers said the 22 SFAB troops embedded with his unit are helping in two key areas: improving artillery firing tactics and collaborating on a strategy for ensuring that forces can stay supplied in the event of a large-scale attack.

“How do you protect (the supply lines)? That’s where we need to learn more,” Gaugers said.

The first rotation of U.S. soldiers from the 4th Security Force Assistance Brigade in Europe comes as tensions continue to escalate between Russia and the West over Moscow’s military buildup around Ukraine.

The Army’s first SFAB unit was formed in 2018 to assist in Afghanistan, and more have been set up in the years since that are aligned with other parts of the world. However, SFAB soldiers in Europe are partnered with more advanced militaries, given a shared NATO connection.

That means more attention to the kind of high-end combat skills needed against an adversary like Russia, which has the ability to attack by land, sea and air and also in the cyber realm. 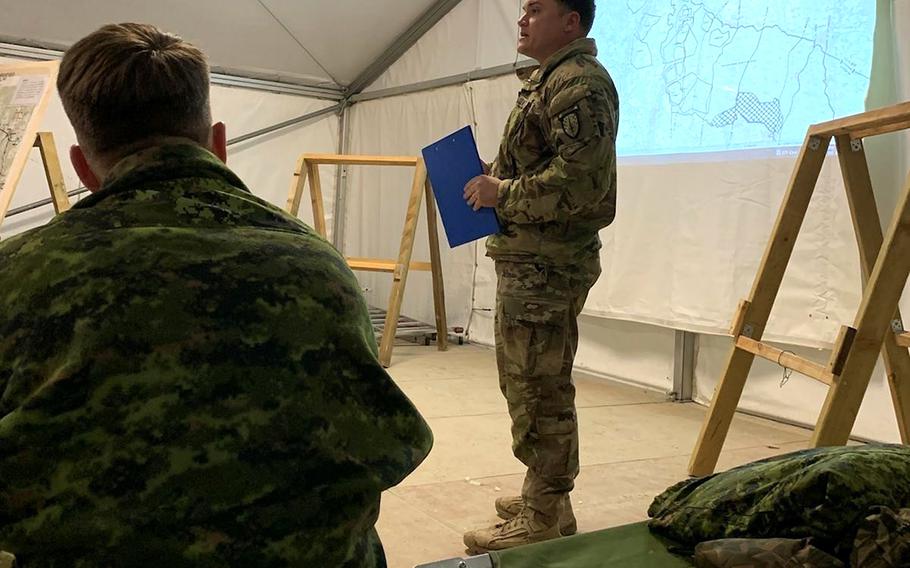 Latvia, a small Baltic country, is outgunned by a wide margin when compared with neighboring Russia. Many security analysts have long viewed the region as NATO’s most vulnerable, given Russia’s geographic and military advantage.

For Latvian forces, countering a potential Russian attack would hinge on their ability to disperse their forces, fire on the move and ensure that ammunition and other supplies can reach troops without detection.

Any larger defense of Latvia also would hinge on support from the rest of NATO, which is obligated under the alliance’s Article 5 to come to the defense of a member under attack.

Gaugers said he has confidence in NATO defense plans for his country and believes that Latvia wouldn’t be left on its own. One of his U.S. counterparts affirmed his belief.

“We always fight as a coalition,” said Maj. Edward Gibbons, a 4th SFAB team leader embedded with the Latvians.

Sometimes the advising can go both ways, soldiers said. For example, Latvian forces have built a communication architecture that they think would withstand Russian attack, enabling troops to maintain contact during battle.

“They’re way out in front in how to operate in an electronic warfare environment,” said Gibbons. “Our Army has not gotten to that level of detail.”

One difference between the Latvian brigade and a typical American one, Gibbons said, is a visceral sense of what’s potentially at stake in Europe by virtue of the country’s bad history with Russia.

“They understand the threat to the east. It’s very real to them,” Gibbons said. “It comes with more weight than what a U.S. brigade carries.”

First Sgt. Matthew Horton, a 4th SFAB adviser, said the collaboration with the Latvians is about rehearsing the most effective ways to resist any incursion onto NATO turf.

“(The Russians) aren’t going to get (Latvia) for free. There will be stiff resistance,” he said.

In each of the countries where SFAB troops are operating, areas of training focus are crafted to the individual needs of the local units, soldiers said.

Of the five countries aligned with 4th SFAB troops, only Georgia is not a NATO member. Still, U.S. forces have long been partnered with Georgia’s military, which was a major troop contributor in Afghanistan.

Maj. Nick Salimbene, a 4th SFAB adviser, said living side by side with the Georgians at their base in Tbilisi has resulted in a level of trust that makes communication with local troops easier.

Salimbene said a key focus is getting Georgian officers to rely more on the enlisted ranks. A common difference between allied militaries and those with a Soviet legacy is a tendency to centralize decision-making rather than push authority down the chain.

Col. Giorgi Dumbadze, head of military education for the Georgian defense forces, said that for the first time, U.S. forces are now training at the brigade level, with a focus on integrating larger fighting formations.

Dumbadze said his country’s military is in better shape today than it was when it was overwhelmed by Russian forces during a brief war in 2008. He said the hope is that SFAB troops will take Georgian ground forces to the next level.

“We are not looking for a conflict, but in case of conflict, we are more ready,” he said.