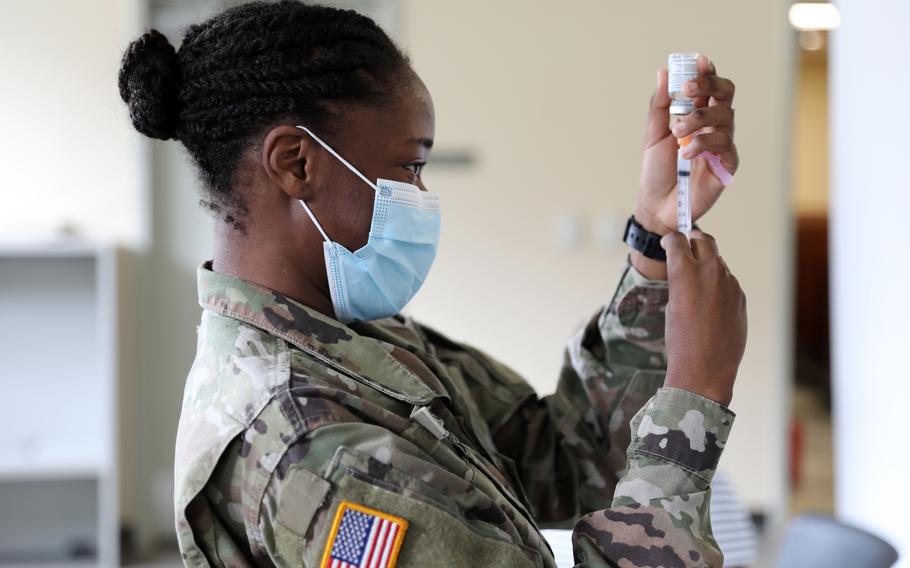 The Army won’t promote or reenlist troops who refuse the coronavirus vaccine and who haven’t requested an exemption, according to a memo from the service’s top civilian leader.

The new rules apply to active-duty, Reserve and National Guard troops, including those in at least one state where the governor doesn’t require the vaccine.

Army Secretary Christine Wormuth in a Nov. 16 memo lays out what will happen if soldiers refuse the vaccine and don’t have an exemption request pending. They will have their records flagged the day they make their final vaccine refusal, after a meeting with a medical professional and a second order to get vaccinated.

“I authorize commanders to impose bars to continued Service … for all Soldiers who refuse the mandatory vaccination order without an approved exemption or a pending exemption request,” Wormuth wrote in the memo.

A soldier will remain flagged until he or she is fully vaccinated, receive an approved medical or administrative exemption or is separated from the Army, according to the memo.

“Favorable personnel actions are suspended for flagged Soldiers … including, but not limited to, reenlistment, reassignment, promotion, appearance before a semi-centralized promotion board, issuance of awards and decorations, attendance at military or civilian schools, application for or use of tuition assistance, payment of enlistment bonus or selective reenlistment bonus, or assumption of command,” Wormuth said in the memo.

It’s unclear whether the Pentagon can force Guardsmen, who serve under both federal and state control, to be vaccinated if the governors they serve do not require a vaccine.

Oklahoma’s adjutant general, Brig. Gen. Thomas Mancino, on behalf of Gov. Kevin Stitt announced Nov. 11 that the state’s Guardsmen are not required to get vaccinated. In response, Pentagon spokesman John Kirby at a Nov. 15 news briefing said Secretary of Defense Lloyd Austin “has the authority to require these vaccines for all members of the force, including the National Guard,” as a readiness issue.

The issue of whether state governors or federal officials have ultimate authority over the National Guard will likely be determined in court, Eugene Fidell, a military law professor at the New York University School of Law told Defense One for a Nov. 18 report.

More than 1.5 million service members are fully vaccinated with another 322,000 partially vaccinated, according to the Defense Department’s website.

About 77% of the Army soldiers ⁠— active duty, Reserve, and Guard ⁠— has received at least one shot, and 72% are completely vaccinated, according to data provided by the Army to Defense One.

Only 51.84% of the Army National Guard is fully vaccinated and 60.72% has received at least one dose, according to data provided to Defense One by the National Guard.