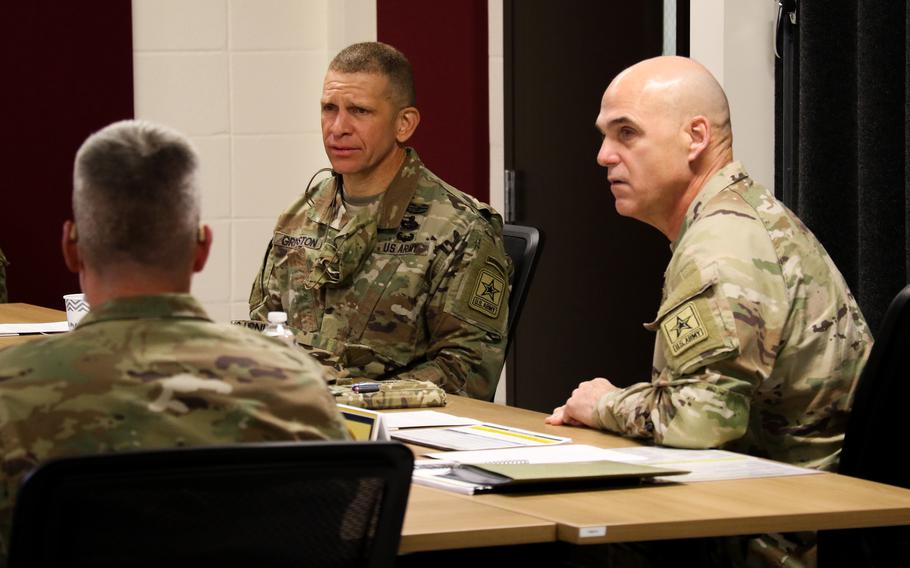 Sgt. Maj. of the Army Michael Grinston receives a brief about the Sergeant Major Assessment Program at Fort Knox, Ky., on Nov. 18, 2020. The program was conducted similarly to the Battalion Commander Assessment Program by gaining more information about sergeants major before selecting them for battalion command sergeant major positions or other key billets. (Daniel Schroeder/U.S. Army)

The Army has begun a new program to take a closer look at command sergeants major eligible to lead brigades in an effort to weed out potentially toxic leaders.

“It wasn’t that the old system was bad. It’s just how do we pick a better leader?” Sgt. Maj. of the Army Michael Grinston told reporters Monday. “We want to move into the 21st century with really good talent management and assess and ensure that we have the absolute best leaders for our soldiers. Our soldiers deserve the best we can give them.”

The program mirrors one recently launched for senior officers that has shown to give soldiers more fit and capable commanders, according to the Army Talent Management Task Force.

About 490 noncommissioned officers will pass through Fort Knox, Ky., this month to conduct the in-person assessment, said Grinston, who traveled to the base to observe the increased screening process. Previously, a board reviewed an NCO’s past evaluations and records to assign leaders into these roles. These command sergeants major advise brigade commanders on leading up to 5,000 troops.

“You get one more look at a leader, and it’s a completely holistic view,” Grinston said.

The Sergeant Major Assessment Program evaluates some of the Army’s most senior NCOs using cognitive and noncognitive evaluations, tests on written and verbal communication, peer and subordinate feedback and a physical fitness test, according to the Army Talent Management Task Force. Candidates also interview with a psychologist and participate in an in-person panel review in which reviewers cannot physically see the candidate.

About 65 of the Army’s operational psychologists are on site to conduct the interviews, which are meant to be an extra layer to determine whether someone has the potential for toxic or counterproductive behavior. The Army has primarily used these types of interviews in the past when selecting candidates for special-mission units, Grinston said.

The new program matches one launched in January 2020 for lieutenant colonels looking to take battalion command. Known as the Command Assessment Program, it expanded to include colonels taking brigade commands about a year ago.

The Army completed a pilot program of the new NCO assessment last year with 28 graduates of the Army Sergeants Major Academy, but this will be the first iteration to produce binding results for the candidates.

The new review also removed an old barrier that blocked NCOs with 30 years of service from continuing in the Army and attempting to take on a brigade leadership role. Removing that variable allows those who still feel physically able and qualified to continue to compete for jobs in the Army and does not discount the service on the chance to place a qualified candidate, Grinston said.

So far, about 166 command sergeants major have been through the assessment at Fort Knox, Grinston said. As he watches candidates vie for positions, he said he’s seeing where some people have struggled to meet writing standards and the physical fitness requirements.

“This is the first time a lot of NCOs have gone … to a board where you had to physically go and stand in front of someone and I think that is unnerving in itself,” Grinston said.

For some soldiers, the last time they stood before a board was a staff sergeant, he said.

Once completed, candidates will be labeled as ready or not yet ready for brigade command.

For those who don’t make the cut, they will receive feedback, and the NCO can request a coach through an Army coaching program to help them improve for future evaluations.